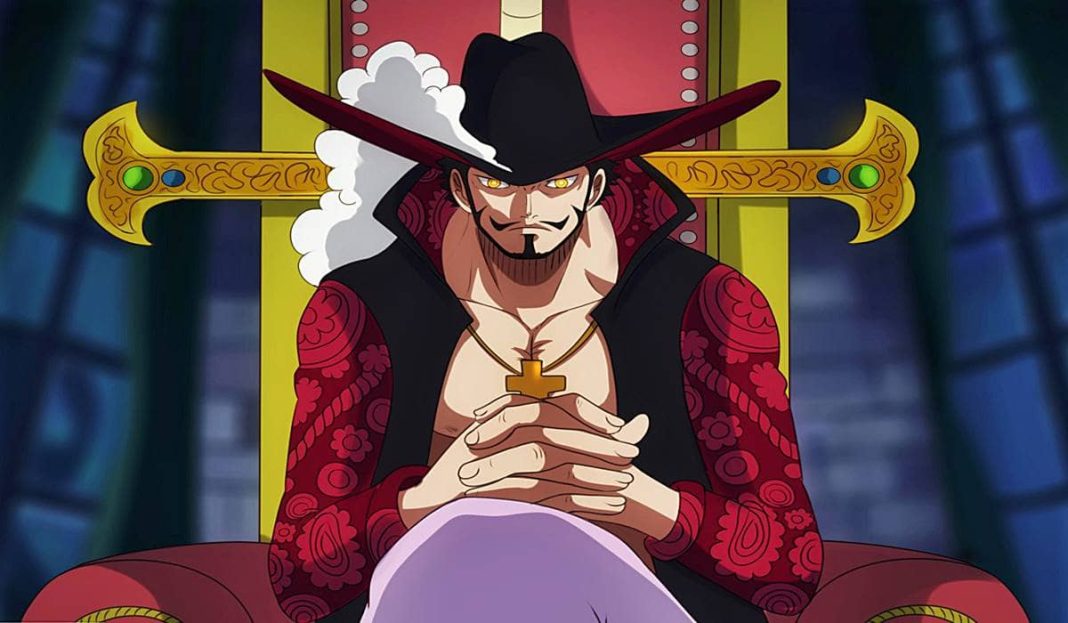 Mihawk: In this blog, we are going to get introduced to a new character in One Piece. He is Dracule Mihawk. We will see ten interesting facts about him. Dracule Mihawk falls to the list of most courageous men in the world of One Piece. But unfortunately, we are not provided with a lot of information about him. Dracule Mihawk is also known as Hawkeyes Mihawk. He is one of the powerful and strongest Swordsman in One Piece. He is also a prominent figure with utmost importance. Mihawk also gets an early appearance as Zoro’s goal. He also served in the Shichibukai.

It is also called as Seven Warlord of the sea. He was a member of it earlier and now he is not a member of it. From childhood, only Mihawk got many scratches due to his training. At that time he used bokken as his weapon. He wears a dark open jacket and short pants. Also has a belt and shoes. Due to this heavy training, he hasn’t got a single scratch in One Piece.

His eyes are so powerful that they can track moving things. It travels at a speed more than that of a sound. It’s because it has been dissolved. We as the audience are in no doubt that Dracule Mihawk is the most dreadful character in One Piece. His importance in the series is high and crucial. We don’t have a lot of data about him. Let’s see one by one some intriguing facts about Dracule Mihawk.

1) Mihawk Have a Black Blade

Even though Dracule Mihawk doesn’t have a crew, still he is a pirate. He falls to the ninth position of members in the story who didn’t have a crew of themself. Shichibukai has one more person who doesn’t have a crew. He is Edward Weevil. These two are the former Shichibukai’s those were active currently. The last adding to their ranks before the group was disassembled. The last appearance of Dracule Mihawk was at Kuraigana Island. He was all set to fight against the Navy forces of the World Government.

Dracule Mihawk is a very strong person and powerful person in the One-piece world. He also has unknown bounties. At once his bounty was frozen. This was because of his status as he was a Shichibukai. Now it is re-evaluating as he is not in the Shichibukai position. It is also the same for other members in the Shichibukai. His bounty will be in huge number soon and will be the same as the likes of Blackbeard.

Many titles are being crowned by Dracule Mihawk. We as the audience of One Piece know him as Hawk Eyes or the World’s Greatest Swordsman. Another title to him is given by Oda and it is called “Clairvoyant.”Anyway, Oda didn’t use it in the official story. But the meaning of clairvoyant can foresee everything especially the future. This means that he is a user of Future Sight Observation Haki.

There is a big competition between Dracule Mihawk and Shanks. For Whitebeard, their battles had reached till the Grand Line back in the day. Anyway, their fight didn’t long that much. We know that Shanks had lost his arm 12 years ago and because of this he had stopped the rivalry between them. But Shanks was growing so powerful during this time. After years he became the Yonko of the sea.

The name  Dracule Mihawk didn’t merge up in a moment during the Great Pirate Era. His determination to reach the top class was earlier before all this. He was very famous everywhere before the Great Pirate Era only. This is very impressive about him. He reached to the throne of the World’s Greatest Swordsman by defeating all the powerful and famous swordsman

An important figure in the Great Pirate Era is Dracule Mihawk. We can see his presence at Logue Town when the whole world was in a severe condition. Also, he was there during Roger’s execution. With him, other co pirates from his time were present like Crocodile, Shanks, Buggy, and Moria. Mihawk and Shanks’s bond is very strong than we imagine. Among them, he is the older one having 44. But Shanks is 39 only.

Being one of the Seven Warlords of the Sea was Dracule Mihawk’s appearance in the story. He was the first Shichibukai to get introduced in the series to the fans. Before the Arlong Park arc, Johnny and Yosaku introduced another Shichibukai called Jinbe. The third successor to the group of Shichibukai was Crocodile.

Dracule Mihawk has limitless powers. This is seen to the audience by Don Krieg and Gin during the Baratie arc. For them, he has destroyed the entire pirate fleet. That one was known to be the largest in East Blue. That had their Flagship and the  Dreadnaught Saber. it’s known that he had destroyed their fifty ships. He destroyed all this just for fun. This showcases what his power is.

Usually strong characters make their debut only after so long. But in the case of Dracule Mihawk, his debut was so early. Roronoa Zoro wants to defeat Mihawk. He has promised this to Kuina. He knows that defeating Mihawk is not an easy task. His appearance in One piece Manga was in chapter 49. And in anime, it was in Episode 23. It’s no doubt that every fan had an impression of Mihawk.