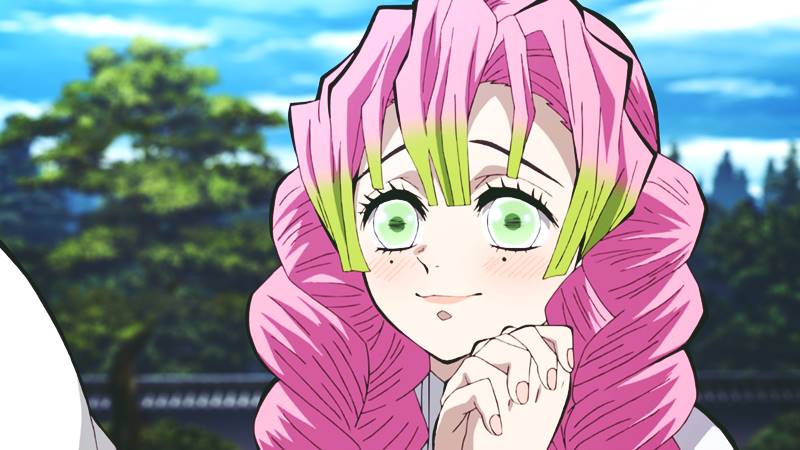 Mitsuri: Hey guys, how are you all? In this blog, I going to share some interesting Things or facts about Mitsuri Kanroji from demon slayer anime. She is one of the characters from Demon slayer or Kimetsu no yaiba anime. She is a member of the demon slayer corps and also the love hashira. Mitsuri is a beautiful young woman with a always smiling face. Her hair is pink and green in color. She was also the most beautiful girl in this anime. Being said that she is the only female hashira After Shinobu, she was well respected and hard trained that made her that strong to become a hashira. Here are some interesting facts about her.

Mitsuri as seen from the anime is a very emotional and caring person. Sometimes she is shy and also when he sees someone doing things that impress her, she gives compliments to them in her mind showing that she is caring towards others. Due to her behavior like this, everyone is easy gets attracted to her. But her shyness is not a hindrance when it comes to making friends. She has become friends with every hashira due to her loving nature and she shares a special bond with Obanai the snake Hashira.

When Mitsuri was born she was a girl with normal looking and cute face. But as she started growing, she showed an unnatural strength just like her mother. She ate more than the rest of her siblings and her hair started having an unnatural color. Due to this behavior, she was sometimes afraid of people. Some people seen her as a freak. She was also being rejected from marriage when she was seventeen. Thus, touched by these things, she decided to cut her hair and dye them black and started eating less so as to look Normal. She tried to fit in with other girls.

When Mitsuri was finding a life partner for herself she came across many boys who wanted her. But she was also confused about whom to marry. One of the reasons is that she is not sure whether the boy whom she will marry will stay with her or not. The reason was she was a very powerful strong girl who was pretending to be weak, when the truth was revealed her partner usually left her. After all these things she became fed up and tried to do something normal.

When she was searching for a partner she came across many men but no one matched her, and she became disappointed. Due to the reason are her strength and strong personality. Then she encountered Kagaya ubuyashiki who told her to reject fake people and embrace her strength. She then joined the demon Slayer corps and increased her strength and became a love hashira. But still, she was not able to find any stronger man and began focusing on her training. And in the process, she developed her love breathing techniques.

Mitsuri uses his techniques of love breathing very well but just like her power and abilities are special, her sword is also special. She has a sword called ‘love sword’ which is extremely powerful and fast. Due to her lenient movements during the fights, the sword helps her to go head to head with her making her fighting movements. Only she can handle her sword as it was made especially for her just like other hashira.

Mitsuri was a very helpful and friendly person. She joined demon Slayer and became everyone’s favorite instantly. She did ber training with Kyujoru Rengoku who helped her develop her new breathing form known as love breathing form from existing Flame breathing. Mitsuri behaved nicely with another and only female hashira named Shinobu. She taught her western cooking techniques. She and Gyomei Himejima also love to talk about cats. Mitsuri has a special bond with Obanai iguro who secretly had s crush on her.

It is well known that Obanai had a crush on her and Kanroji also admired him a lot more than usual showing she was also interested in him. But they were not lovers really. He gifted her green socks she wears now, she also exchanged foof with each other sometimes sent each other letters showing admiration and love. After a fight with Muzan, they also met ubuyashiki where they confessed to each other when in the fight with Muzan. But they never really get married. They were both killed in the fight and she said if they will reincarnate she wants to be with him as a wife forever.

When Mitsuri was training with Kyujoru Rengoku, she was taught flame breathing but she was not able to understand it. In the process, she decided to create her own fighting technique known as love breathing techniques. After that, he also developed many forms of the techniques. The technique mainly has six forms Which are usually named after cat attacks. Some of them are, Shivers of first love, love pangs, cat love shower, swaying love wild claw, etc.

Duri fight with upper rank four Hentangu, she unknowingly developed her Demon slayer mark. They have shaped like two hearts upside down and opposite from and angel wings around them appeared around her neck. In This process she when she awakened her mark she became so powerful that she was alone enough for that demon who require at least three hashiras to be defeate. This shows that her powers had no limit at that time.

This is a spoiler but yes she dies in the series. When fighting with Muzan, she got slash out by Muzan, looking at her condition Obanai took her out of battle, but she still wanted to fight. She says everyone specially obanai to not to get killed. But she was so badly wounded that she could not come out from it and finally died. When dying she remembered every moment she lived and hoped that she and obanai will reincarnate and marry each other.