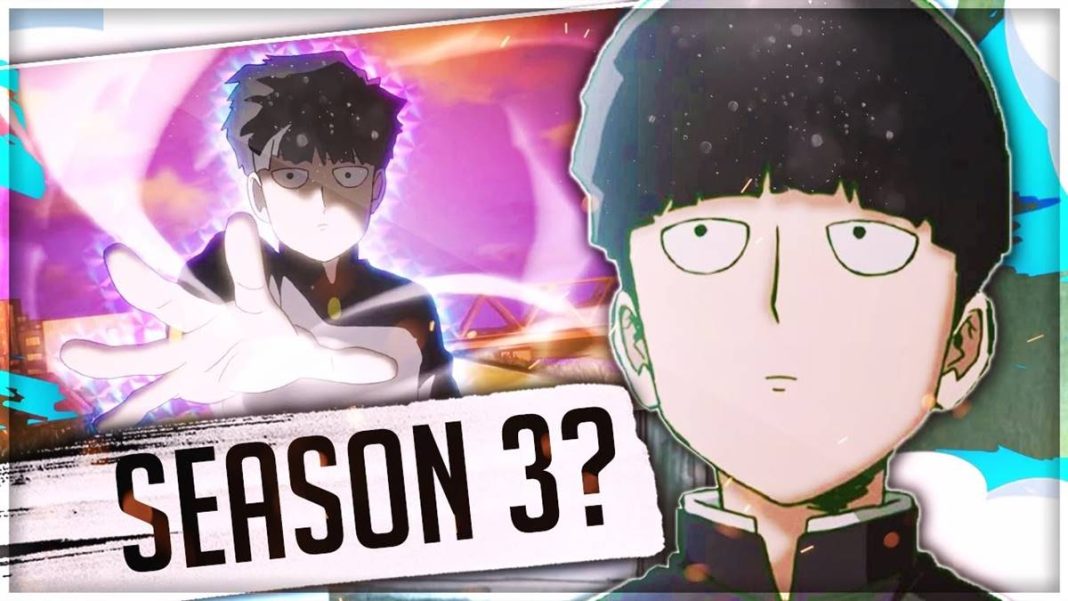 Mob Psycho Season 3: Mob Psycho 100 is a popular Japanese anime series based on the manga series by ONE. Studio Bones originally aired the anime adaption in 2016, and after the first season’s success, the studio released Season 2 in 2019. Mob Psycho 100 has also gotten an OVA, Mob Psycho 100: The Spirits and Such Consultation Office’s First Company Outing, since then.

In any case, the entire anime community is eagerly anticipating Season 3 of the anime series’ return to our televisions. You’ll be happy to learn that the developers of Mob Psycho 100 have finally confirmed that a new anime season is in the works.

A strange countdown began a few months ago on Mob Psycho 100’s official Twitter account. Well, the countdown has come to an end after 100 days with the official announcement of Season 3 of the anime series. Surprisingly, the studio published the first PV trailer to promote the anime’s future season. The trailer, as predicted, is as enthralling as past seasons of Mob Psycho 100, and it’s more than enough to whet your appetite for Season 3. Here it is; check out the trailer for yourself:

Of course, the announcement of Season 3 of Mob Psycho 100 is exciting. The new season’s release date, however, is yet unknown. Season 3 will be released “soon,” according to the trailer, although the company has yet to offer us a specific release date.

The protagonist of the anime/manga series (Mob Psycho Season 3)

Shigeo Kageyama, better known as “Mob,” is the protagonist of the anime/manga series. Shigeo is an average student who isn’t very strong physically. Despite his unassuming appearance, Mob is a highly powerful esper with amazing psychic abilities. To safeguard his loved ones, Mob suppresses his abilities and attempts to live a normal life. When other wicked espers cross Mob’s path, however, he loses control and shows his full might.

The first season of Studio BONES’ Mob Psycho 100 anime premiered in the summer of 2016. In 2019, the second season premiered. Mob Psycho 100 II: The First Spirits and Such Company Trip – A Journey that Mends the Heart and Heals the Soul, as well as a Mob Psycho Mini omake and a recap episode titled Mob Psycho 100 Reigen: The Miraculous Unknown Psychic, are all part of the franchise.

Do you or someone you know require a low-cost exorcist? Reigen is the one for you! What’s his formula for catching ghosts while keeping costs low? Well, for starters, he’s a scam artist, and for starters, he pays his student aide Shigeo less than the minimum wage. Shigeo is an awkward but nice young man whose desire to help people and get along with them is inextricably linked to the mental safety barriers he’s erected around his own emotions. Reigen is well aware that he must abuse Shigeo to stay in business, but he is also his mentor and advisor, for better or worse. And he knows that when the normally suppressed kid’s emotions reach level 100, it might unleash more psychic energy than either of them can handle.

Most Powerful Characters in Mob Psycho 100

Mob Psycho 100 introduced viewers to a world filled with demonic spirits and espers with telekinetic talents who must stop them from wreaking havoc on the humans who live there.

To begin with, the majority of the espers have limited skills. The other characters rarely achieve the same levels of success as the protagonist, Shigeo “Mob” Kageyama, especially when his power metre reaches 100% or higher. When Mob finally meets his match, the series is treating to some truly dramatic moments. Even if Mob is the most powerful character, others challenge him and are quite powerful on their own.

People can be possessed by Dimple (Mob Psycho Season 3)

When fans first encounter Dimple, he is significantly more powerful, but throughout the first season of Mob Psycho 100, Mob nearly exorcises him and drains the majority of his energy. Despite this, he persists in his much weaker form, eventually becoming Mob’s friend.

Dimple can possess other individuals even if he doesn’t have the powerful powers he used to have. This talent aided the party in escaping several tricky situations. The dimple may not be the most powerful character on the show, but he should never be underestimate in a fight.

The Capabilities of Ritsu Kageyama Improve Over Time

Ritsu is introduce as Mob’s younger brother who lacks Mob’s telekinetic abilities when viewers first encounter him. For a period, Ritsu seemed to be resentful of his older brother’s abilities. Ritsu, on the other hand, was later discover to have his abilities, even though they were inferior to Mob’s.

Ritsu’s skills are initially weak in comparison to the majority of the other espers we encounter. Ritsu’s abilities, on the other hand, develop through time and he gets more powerful. Ritsu, unlike Mob, does not hold espers liable for using their skills against other humans when they are require.

Teruki Hanazawa can hold his own against a mob, but every time he loses, he gets sick

Teruki Hanazawa begins his time on Mob Psycho 100 by challenging Mob to a fight, during which both characters demonstrate their telekinetic talents. And, to be fair, Teruki holds his own against Mob very well,

despite being significantly less terrifying at his peak than Mob. Teruki has the strength to stand up to some of Claw’s more gifted members. Teruki, on the other hand, tends to freeze up when he loses a fight and becomes unwell. He is also unable to harness his powers for a while following. Teruki would probably be higher on our list if it weren’t for this flaw.

Toshiki Minegichi has the ability to control plant life

ToshikiMinegichi is one of the series’ stronger espers, and he has been involving in the criminal organization Claw’s plans. Minegichi is a member of the Ultimate 5, a group made up of Claw’s top five members. When it comes to using psychic talents, all of these members are consider exceptional.

Minegichi possesses a unique ability to generate and govern plant life. Minegichi can create vines and Venus flytraps, which they use against their opponents. The disadvantage of this ability is that it can be used against Minegichi by a more powerful psychic.