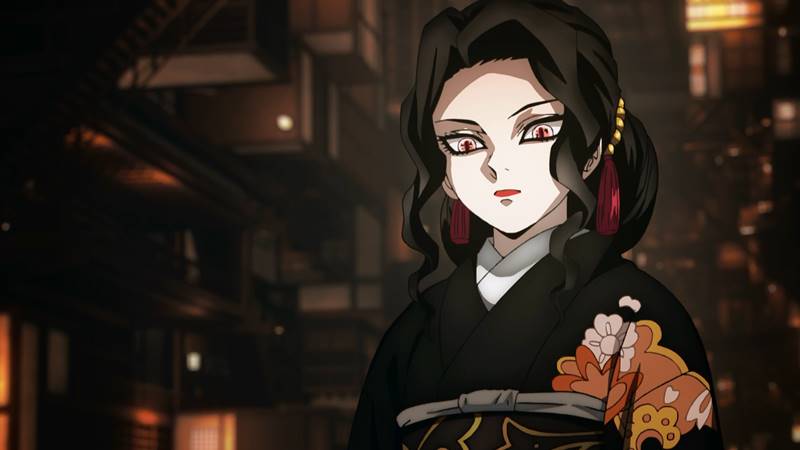 Muzan: Hello everyone. How are you all? I hope you all are doing well. Today, this blog is about the strongest demon from the anime Kimetsu No Yaiba aka Demon slayer, named Muzan Kibutsuji. He is the main villain of the series and the main antagonist. Muzan is the leader of the demons known as twelve Kizuki. He is the first demon as shown in the series. Muzan is responsible for creating all the demons which we know and see today in the series.

He made his home in an infinity castle Which is impossible to break. Muzan has been shown to possess great power as a demon since he was the First to become a demon. Muzan is a ruthless person who doesn’t care about human being and enjoy killing them. It has been shown that he cant go out in the sun as his body will burn. His main purpose of living is that he wants to find a flower or rather medicine for his treatment named ” blue spider lily”. Here are some facts about Muzan.

One is his normal manly form, in another, he disguises himself as one beautiful woman when he meets demons of lower rank. He wears a long yakuta so that no one recognizes him initially. In the latest, he transformed into a pale sick child of the old couple to disguise himself. He changed his appearance again when he neutralized Tamayo’s poison. His hair grew in length due to his poison ability. During the final battle to protect himself from sun, he takes the form of a big demonic baby as large as a three-story building. Thus we can say he is a master of disguise.

Muzan is a human with no emotion, a harsh personality, and a ruthless character. He is a very intelligent and intimidating person. Muzan is rarely seen showing any emotions of fear or happiness. He shows no respect to humans and his subordinate’s demons also. His tone of voice is very consistent goes with his personality. His cruel nature has begged him great admiration from demons. He believes that other people are here to only serve him.

His ego is immeasurable and lives in the delusion of killing. He killed drunk person his female partners only for confronting them. Muzan has also his human past life memories which show how weak he was and also he didn’t like them. He has no inability only in walking in the sun. Behind these emotions, he is said to have a lust for perfection. He is said to coward as he remained most time in his castle fearing demon slayers. He is also a master of disguise as he is able to blend in the human society.

Muzan when he was in his mother’s womb was diagnosed with a disease that made his heart stop many times. When he was born he didn’t show any signs of life as his heart was silent and he was not breathing. Everyone thought he was dead but when they were taking him to be cremated he released his first cry and suddenly everyone was shocked. Even when not dying he was still not in good condition. As he grew up, he was identified with a rare disease that will kill him before he will turn twenty. As he was growing his fear was also growing as he will die soon.

In his fear of death, he searched for many doctors and finally came across a doctor who made Muzan a special type of medicine Which was not used on anyone. When he took medicine, instead of making Muzan good the medication made his condition worse. Muzan got angry and killed the doctor only to find later that the medicine has worked on his making him stronger. But there were other problems created like he now wanted to consume human flesh and his body was unable to withstand sunlight. He regretted killing the doctor who said that Muzan would be alright once the medicine is complete but Muzan killed him before.

When he was turning into a flesh-eating, blood-thirsty demon by the medicine he regrette that he should have taken the medicine completely and should not have kill the doctor. He was left with no choice as to remain in shadow as sunlight will burn his skin. The only cure for his condition was a “blue spider lily” that will cure him but it was nearly impossible to find it. At this time he was in anger but came up with an idea.

He started making more demons using his blood to send them across the earth to find that spider lily or at least find a cure that will find a way to protect him from sunlight. This was his only desire left and he spent thousands of years searching for medicine.  In one such era, he came across a Girl named Tamayo who was fighting with a disease. Muzan helped him but she killed her own family in thirst for blood. His search for the medicine continued but he didn’t find it yet.

In search of the spider lily, he started making more demons as they will find help to find him that medicine. When he was making demons he came across a powerful but greedy demon slayer known as Michikatsu Tsugikuni, the user of Moon style. Michikatsu was jealous of his brother and wanted to become stronger than his brother. In search of power, he accepted becoming a Demon from Muzan. Muzan injected Michikatsu with a large amount of his blood. Muzan offered Michikatsu that he would live forever and perfect his skills. Later after three days, Michikatsu turned into a demon named Kokushibo. Later Muzan created more demons like Akaza, doma, etc with his blood and helped them live longer and a life full of power.

When Muzan and Kokushibo were searching for Spider lily, they came across a powerful demon slayer known as Yoriichi Tsugikuni, brother of Michikatsu. Yoriichi was the only one who was using sun breathing as a fighting style. Muzan didn’t sense any danger against him initially but later when Yoriichi showed his true power by cutting Muzan’s weak spot that is his seven hearts and five brains. First time in his life Muzan sense fear and was left on the verge of dying. He was unable to heal quickly but later healed using his remaining marks and used his power to cut the body of Yoriichi. Along with help from Kokushibo, he killed Yoriichi. But he became fearful of the sun-breathing person and killed everyone from the family. His fear didn’t stop here as he searched for more.

Before encountering the sun breather Yoriichi, Muzan has pride over his power and knew that no human can kill him. But later he feared his death after getting nearly kill by Yoriichi in a fight. His subordinates Kokushibo helped him. In search, they killed anyone who used sun breathing techniques as there will be no one who can kill and challenge Muzan. They were almost succeed in killing every person from the family of sun breather. He thought that he had killed everyone who used sun breathing. Muzan was himself the most powerful demon who created demons but after looking at Yoriichi he was so frightene that he said that the real demon is him.

In his fear of death, he later only sends his demons to confront any demon slayer. Muzan was greatly frightene by the demon slayers. He remained fearful after the death of Yoriichi. In the search of power he sacrifice his dreams and restricted himself to his castle and send his demons across the continent in search of medicine. Later he found out that the Kamado family is the keeper of sun Breathing. Sensing danger Muzan attacked them and killed them. He injected his blood into them making Nezuko a demon. Tanjiro was away from town at that time and when he returned he saw his family being kill and his sister turned into a demon. He was left stunned as to who did this to his family.

Muzan was the person who was responsible for creating twelve kizuki or twelve moons the demons. They all run under the commands of Muzan. Muzan possesses a high amount of Muzans blood, making the most powerful. They are divide into two groups Upper ranks and lower ranks. Each has a number engraved in their eyes. Muzan can replace and kill them with his own will. Upper ranked members are( in series) Kokushibo, Doma, Akaza, Hentangu, Gyokko, Daki, And Gyutaro.

While lower-ranked is weaker whom Muzan doesn’t have any interest in. He also kill Kyogai, as he was not able to consume human flesh and was replace by Rui, who was also kill by Giyu. Muzan called meeting with lower ranks and killed them one by one asking why they want to live. Only Enmu was able to survive in this who became stronger by Muzan blood. After he was kill on the train Muzan disband the idea of lower moons and only ordered to keep upper moons.

Muzan has been shown to have abilities beyond imagination one such is his ability to absorb anything. He can absorb anything, an example is that when he absorbed Tamayo’s drug. Without any pain. He also planned to eat Nezuko to obtain her immunity against sunlight. Muzan became so powerful that even blades don’t cut his throat. He withstand the drug used to transform demons into humans. Muzan while in a battle takes the form of a monstrous demon, dark red and with long limbs and mouth wide open. His arms become like whips, which stretch across and grow several feet. His mouth opens like a suction tube, sucking anything. Muzan possesses demonic blood, blood memory transfer, demon manipulation, etc. Abilities that make him indestructible. His ability to regenerate cant be match by anyone.

A. Muzan was very abusive with women. In the series, he has been shown to have five wives. Due to a lack of love and empathy as a demon, he killed and abused them. Some committed suicide and some left him.

C. Later when Muzan was defeated, it is seen that ubuyashiki family curse vanishes and they live more. Kagayas son Kiriya also lived more than a hundred years and seem very happy.

D. Due to his appearance and style people also make gag at him saying he looks like Michael Jackson.

E. Muzan in his first appearance has been shown as a family man. He has a wife a beautiful small daughter. His daughter looked happy with him which is the opposite of the fact that he is abusive with women. It is also not confirmed that they were just acting or was it real.