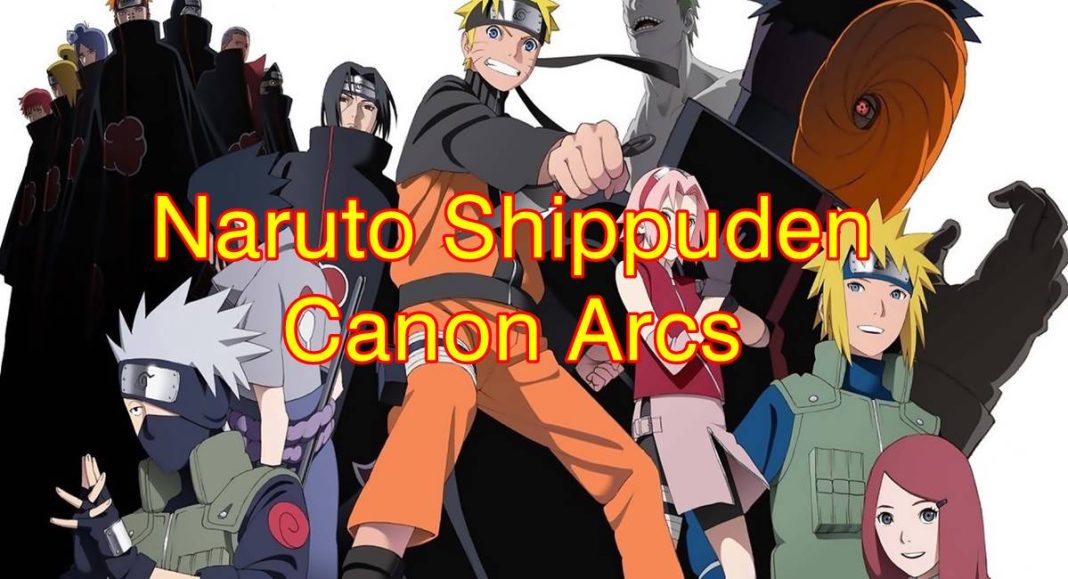 Naruto Shippuden Canon Arcs: The completion of Naruto’s extensive, hundreds-episode run is among the most difficult tasks an anime fan can take on. Although viewers must watch the entire thing to comprehend what is happening, ignoring any filler arcs they find uninteresting, they may want to be more selective when rewatching.

To choose which sections are valuable, it can be helpful to be aware of the most remarkable storylines. Everyone has their own personal favorites, but some storylines are home to some of the best fights and the most heartfelt emotional moments in all of Naruto, Naruto Shippuden, and Boruto.

The Fated Battle Between Brothers Arc

When watching The Fated Battle, even the most ardent and seasoned anime fans will cry. It’s terrible how this story arc culminates in the decisive fight between Sasuke and Itachi. Since the beginning, Sasuke has been seeking revenge against his older brother, and it seems that he is now getting some of it, if not all of it. Despite the fact that Sasuke eventually kills Itachi,

the victory is hollow due to the terrible secret that Itachi was concealing from him. Itachi wasn’t interested in executing the entire Uchiha family. He made most of the opportunity that government official Danzo gave him. If Root did the deed alone, he could spare his adored younger brother’s life in addition to his own and not have to kill the entire clan.

The Tale Of Jiraiya The Gallant

In addition to being the most memorable plotlines in the series, The Tale of Jiraiya the Gallant has a great name. Prior to this character arc, Jiraiya’s was a little underdeveloped. Being a pervert was one of his distinguishing characteristics,

a divisive trait that some people find endearing and others do not. In this arc, he explores his past in great detail and develops his mentorship with Naruto, growing into a developed, charming character. Before returning to Konoha, he spent months parenting three orphans and taught them how to survive in a dangerous area.

The Akatsuki Suppression Mission arc is centred on the struggle to kill Hidan and Kakuzu, two members of the Akatsuki. In an effort to get free of them, Team 10 causes Asuma to pass away. Even though the episode’s spoiler-filled title, “Asuma Dies,” lessens how stunning this might otherwise be,

it still has a dramatic conclusion. Following this, Team 10 fights to get revenge as Asuma’s loved ones mourn his demise. Using a plan devised by Shikamaru, the three ninja track down Hidan and brutally execute him for what he did to their teacher. It’s one of the most healing scenes in the whole series.

The Pain Invasion arc of Naruto Shippuden has some of the show’s most remarkable episodes. Yet it also has some of the most important scenes in the show’s illustrious past. Occasionally, the animation will become a little shaky. In this arc, Pain and his goons assault Konoha, the tragic truth of Kakashi’s father’s suicide is revealed,

and Hinata declares her love for Naruto and defends him. In this tale, the main character is highly highlighted. Naruto is able to understand Pain’s motivations despite all the devastation he has done and feels pity for him. Still, the hero considers Pain to be accountable for his actions. Since the character who was formerly rejected is now celebrated as a champion, it has become one of the most emotionally satisfying plots.

One of Naruto’s goals throughout the whole series has been his desire to save Sasuke Uchiha from himself. In the Sasuke Recovery Mission storyline, that motivation is first revealed. Before Naruto left Konoha, Sasuke was both an enemy and a friend in his eyes. Sasuke agrees to train with Orochimaru in this tale arc on the understanding that the latter will kill the boy

and then implant his own consciousness within it. Naruto and his other ninja do their hardest, but they are unable to get Sasuke back to the village. This misstep ruins the audience’s emotions while also demonstrating that heroes don’t always triumph in this drama.

In the Land of Waves arc, we learn about Team 7’s first significant assignment. They are asked to join a worker to his bridge-building project but find that there is more involved than they had thought. These newbie ninjas find themselves in the centre of a conflict between a mob boss trying to take over a community and others who stand in his path. Instead of fighting them because they are naturally evil,

Team 7 must do so because Zabuza and Haku are on the opposite side of a conflict. This arc shows how politically involved Naruto would eventually become, which is instructive to viewers. Sometimes it’s difficult to tell who is right and who is wrong in the show.

The Birth Of The Ten-Tails’ Jinchuriki Arc

The Birth of the Ten-Tails’ Jinchuriki storyline features the bloodiest conflict of the Fourth Shinobi World War. The battle scene is filthy and chaotic. Gai squares up against Madara in one of the series’ most surprisingly brilliant confrontations, Obito is defeated, and Naruto and Sasuke combine their tremendous skills to unleash a deadly onslaught.

It looks like the heroes have little hope of surviving the battle when Madara unleashes the Infinite Tsukuyomi, bringing up some of the fiercest conflicts Naruto has ever witnessed.

When Kakashi warned Sasuke that everyone he cared about had already died, viewers will learn what he meant in the Kakashi Gaiden arc. In this plotline, Kakashi’s teammate Obito gets pinned beneath a boulder

and gives Kakashi his sharingan eye, believing that he will soon pass away. Madara, Obito’s ancestor, uses the opportunity to attempt and recruit Obito in his cause of eradicating and restarting humanity before finally saving and healing him.