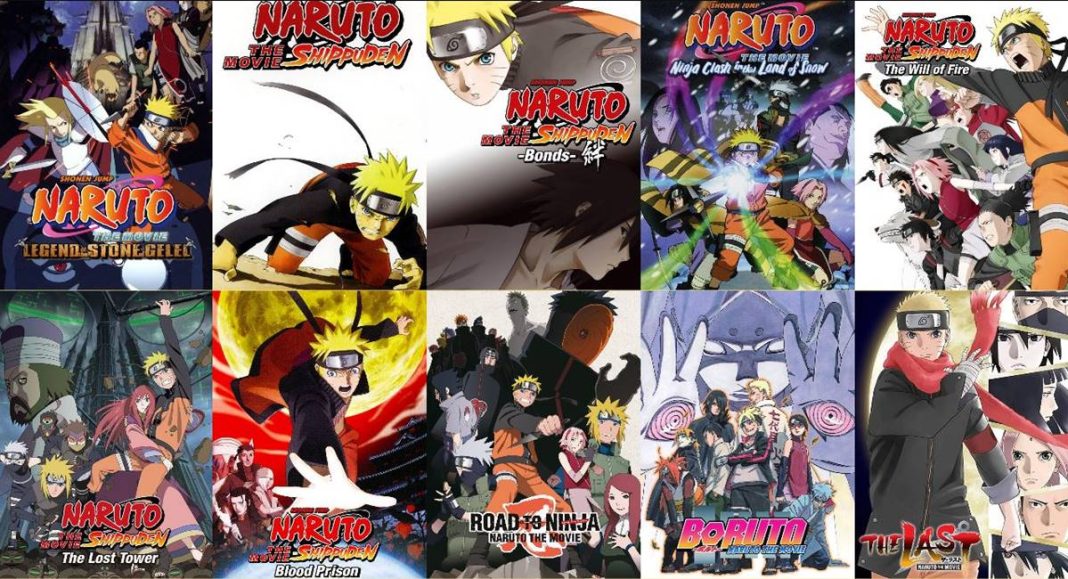 Naruto Shippuden canon movies: The anime series Naruto is among the most well-known in history. The Ninja universe has been the setting for a variety of films, in addition to the show’s long run of hundreds of episodes. The number of these that are canon may have crossed your mind if you’re a fan of the show after seeing them previously.

Since the anime version of Masashi Kishimoto’s novel Naruto began in 2012, there have been 11 films of variable caliber. Therefore, we have analyzed which films, ranging from Naruto the Movie: Ninja Clash in the Land of Snow to Boruto, serve to further contextualize the tale.

Ninja Clash in the Land of Snow

A job to accompany a film team into the Land of Snow is given to Naruto, Sasuke, and Sakura in the first movie in the series. Yukie Fujikaze, the lead actress, refuses to go there and puts up barriers to make the mission harder for Team 7, and after a run-in with some shinobi, Yukie’s troubled past is revealed. In contrast to the rest of the film,

which is all action, the opening part of the movie is very humorous. The first Naruto movie is mostly filler and should be skipped unless you’re just there for the action, despite the production value and respectable battle scenes.

Naruto, Sakura, and Shikamaru are attacked by a group of knights lead by Temujin while completing a low-risk mission in Legend of the Stone of Gelel, which takes place after Sasuke left Team 7. The group decides to aid Temujin in defending a potent stone at some point. While the fantastic art perfectly compliments the action scenes, the story is quite formulaic and heavily draws from anime cliches. The visual appeal of Legend of the Stone of Gelel outweighs its lackluster plot. You should skip this movie.

Guardians of the Crescent Moon Kingdom (2006)

When Team is sent on a mission to take a spoilt Prince back to the Moon Kingdom in Guardians of the Crescent Moon Kingdom, Rock Lee goes along with them. The team is assaulted by a squad of ninja mercenaries, though, and the mission goes awry. Actually, it’s very clear that Kishimoto wasn’t involved in making this movie. This entry, which is obviously filler, mostly concentrates on supporting cast members. Although the animation is still done beautifully, there aren’t actually many action moments. Guardians of the Crescent Moon Kingdom’s key advantage is that it demonstrates Naruto’s development and strength before the main plot moves into Shippuden. This film should be avoided overall.

Shion, a young Priestess, predicts Naruto’s demise at the hands of a strong demon in Shippuden’s opening scene. Shion wants to permanently seal the demon away in order to stop his death, and Naruto is charged with doing so despite being warned to keep away from her. In comparison to the first three Naruto movies,

this one deals with more mature subjects that raise the stakes of the plot and make it more intriguing. The fact that Shippuden is still filler, nevertheless, lessens the suspense around Naruto’s impending demise. Even said, Rock Lee occasionally steals the show as the action and fights are swift and beautifully rendered. This might be another skip, though, if you’re not searching for another filler narrative.

The Hidden Leaf Village in Bonds is unexpectedly attacked, and a second World War is a serious possibility. Amaru, the trainee of a talented doctor named Shinnou, is to be protected on their journey back to their town by Naruto, Sakura, and Hinata. The two briefly put their enmity aside to confront a shared foe when Sasuke shows up to fight alongside Naruto. As a preview of their encounters in the Naruto: Shippuden anime, Bonds emphasizes their rivalry and previous camaraderie. The bond between Naruto and Sasuke is not the only thing Bonds emphasizes. Amaru’s friendship with Shinnou, the film’s antagonist, who excels at medical ninjutsu and has mastered dark chakra, is what drives the plot. I’ll say it again: the animation and fight scenes are stunning.

The Will of Fire (2009) (Naruto Shippuden canon movies)

Throughout the world, ninjas with bloodline constraints start to vanish in The Will of Fire. Tsunade commands Kakashi to give his life in order to avert a war. To stop Kakashi’s sacrifice, Naruto, who disapproves of the decision, starts a battle with both allies and foes. The Will of Fire encompasses nearly everyone—as opposed to earlier films,

which only included a select few characters—with the exception of Sasuke. Following that, the movie contrasts each character’s viewpoint on Kakashi’s sacrifice, setting friends against friends. This poses a serious threat to the Fire of Will, a way of life that holds that love is the way to peace and that everyone in the village is a member of a big family. This one is by far the most moving and inspirational, therefore it is worth seeing.

Naruto accidentally enters the past twenty years while on a mission to find a missing-nin. The Fourth Hokage, Minato Namikaze, is there when he meets him. The Lost Tower’s main attraction is unquestionably Naruto fighting alongside Minato, yet the concept is overall quite creative. Furthermore, throughout the bulk of the movie,

Minato isn’t aware that he’s his father, so having him there lends the movie some credibility. Even so, this will be done better in a later Naruto: Shippuden movie. The Lost Tower may be best avoided if you are not interested in seeing Minato or a young Kakashi in it.

The kidnapping of Hanabi by Hinata’s younger sister Toneri Otsutsuki occurs two years after the Fourth Great Ninja War. She needs to be saved, and Naruto, Hinata, Sakura, Shikamaru, and Sai must do both while fending off this new menace. The Last’s primary goal is to establish Naruto and Hinata’s bond, which was undeveloped throughout the series overall. It might be better than nothing. The Last boasts some excellent fight scenes and a step up in animation quality. The Last ends up being a crucial installment in the saga because it deals extensively with the relationship between Naruto and Hinata.