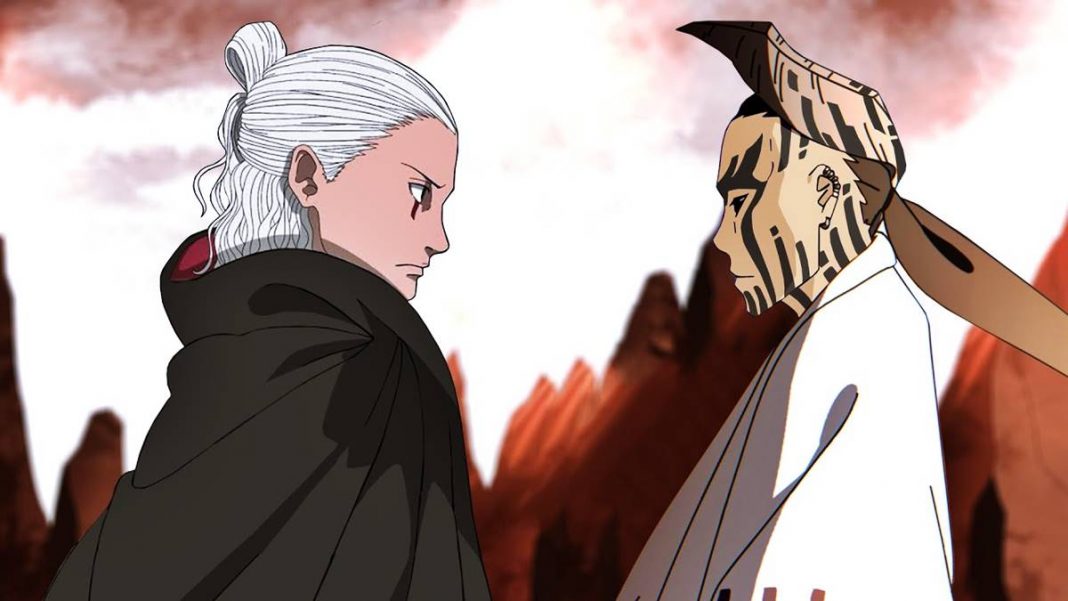 About Kashin: In this blog, I am going to tell something about Kashin Koji versus Isshiki Otsutsuki. Like both are two important anime characters.

Kashin Koji’s appearance didn’t take at the same time in anime and manga.in anime, he makes his appearance in episode 53. But this episode didn’t reveal his face that much. He doesn’t make his first appearance until much later. In the manga, he appears in chapter 15. On the other side, Isshiki Ōtsutsuki made his debut character as Jigen in chapter 15 of Boruto. He came out with all other members of the kara organization. So his proper introduction is in chapter 35 in Boruto called “Up To You.”So Isshiki became the center of attraction from chapter 35 of Boruto’s story and his history is filled with action sequences.

Being the clone of Sannin and an inner of Kara, Kashin Koji is a monster type when we look at his abilities and power. He is superhuman. He was able to defeat Konohagakure’s top jōnin. For Kakashi Hatake, he is a very dangerous opponent in the anime. As he killed Victor with so ease he was considered to be one of the strongest inners. So he was confident enough that he can defeat Delta. Even Isshiki Ōtsutsuki praised him as a powerful man.

He was able to defeat Isshiki’s vessel when he was weakened so much and he even stood up to Isshiki himself. On the other hand, I think Isshiki was also as powerful as Koji. He even has the power to control all the strengths embedded in Jergens body. Isshiki prevented Jigen from using all the powers he gained and enhanced.

He even defeated Naruto Uzumaki and Sasuke Uchiha with his limited powers. These two strongest characters in shinobi history couldn’t resist the power of Isshiki. Naruto was sealed while Sasuke almost faced death. Amado had described Isshiki’s power. That if he can use his whole powers he even can destroy the earth and no one won’t be able to stop him.

Amado used Scientific Ninja Tools to modify Koji’s body. He moves at a breakneck pace, capable of catching an opponent off guard from afar while they are facing him. Even a severely weakened Jigen could contend with him as he was able to counter and exchange blows with him effectively. He’s extremely tough, having survived an arm amputation his body and legs paralyze and still convening a toad to get away.

Similarly, despite his damaged state, Koji has incredible chakra control, performing techniques with just one hand. He can likewise employ Sage Mode because he has the same amount of chakra reserves. On the other side, When compared to Naruto in his Six Paths Sage Mode form, Isshiki wields a great amount of chakra.

Its immense reserves and strength, when used to their full potential, are capable of overpowering Jigen’s body. His dark chakra was strong enough to terrify Ino Yamanaka to the point of near-collapse even when he was limiting himself. His chakra was such strong it terrifie Sasuke into running and afterward scared both him and Naruto when he release more of his power through Jigen’s Kama.

MARKS ON THE BODY

Members of the Kara have a roman numeral assigned to them. The reason behind this is unknown. Leader of the Kara group Jigen had the roman numeral IV on his cheek. Koji had it on the face.it starts from the corner of the eyes and extends downwards. On the other side, Isshiki doesn’t have any roman numerals but has some karma marks.

Isshiki is an Otsutsuki clan member and so he got the power to give his karma marks to others. By doing so he can use that form as a backup if something might happen to him in the future. This he did first to Jigen, giving his first karma mark. This he had put upon a thousand years ago and didn’t use it. He decided to use Kawaki’s body as a vessel by giving him the karma mark.

This was because Jigen’s body can’t take all his powers. In the Boruto manga prologue, we can see Kawaki with Isshiki and the birthmark is visible meaning he still can use it in the future.