The movie ‘Tokyo Entry Tokyo Ghoul’ is a road show this summer. In addition, in the weekly Young Jump released on January 26 (Shueisha), Shimizu wearing the uniform ‘s uniform, which is a costume in the movie’ s play, will appear on the cover and also the gravure will be posted. 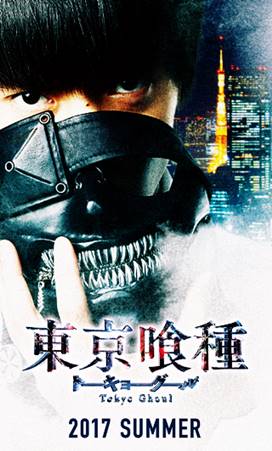 (From the left to right in image below) Yuu Aoi (live action Rurouni Kenshin’s Megumi) as the Rize Kamishiro, EXILE’s Nobuyuki Suzuki as Kotaro Amon, and the Yo Oizumi (voice of Layton in the Professor Layton series) as the Kureo Mado.

Kentaro Hagiwara (‘Super Star’ short) is directing the film, and the production shot principal photography from the last July to September. The film will be open in Japan in summer.

Viz – publishes the manga in North America and it describes the story.

Ghouls also live among us, the same as normal people in every way except their craving for the human flesh. Shy Ken Kaneki is thrilled to go on a date with the beautiful “Rize”. But it turn’s out that she’s only interested in his body eating it, that is. When a morally questionable rescue transforms him into the first half human half Ghoul hybrid, Ken is drawn into the dark and violent world of Ghoul’s, which exists alongside our own.