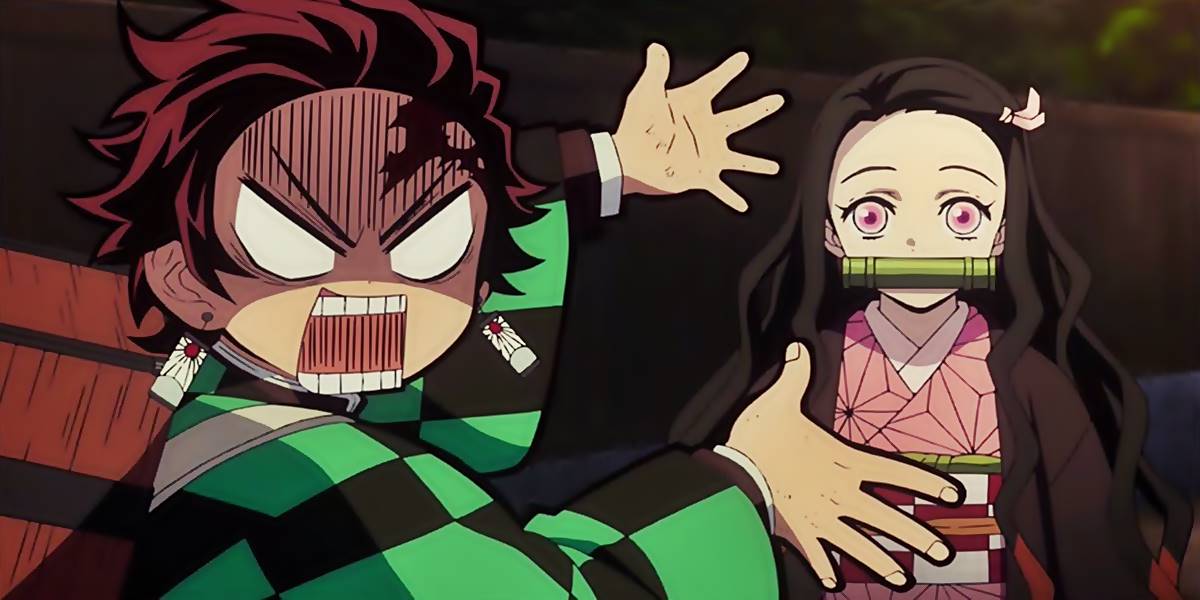 Nezuko: Hello guys. This blog is about Nezuko Kamado from Demon Slayer (kimetsu no Yaiba). She is the main second main character in the series and the youngest sister of Tanjiro kamado. Nezuko name means ” Red bean” and also Flower( Japanese snowball). She was human but later turned into a demon.

She was introduced as Human in the series but later turned into a demon. Her age is 12 years. Nezuko birthday is on the 28th of December. Her hairs are black in color with flame orange ends. His eyes are pink in color. She made her debut in chapter 1 . She is petite and with fair skin. According to kamado, she was the Great beauty in their hometown.

she wears a pink kimono. There are patterns on it which are white cheques. She wears a long sporty dark brown haori over it. Which reach her knees towards her ankles. With pink and white socks. She also has a small ribbon around her head and a piece of bamboo in her mouth to make her not to bite anyone. Her hair was buckled up when she was human but kept open when she turned into a demon.

Before becoming a demon she was living with her family happily. She was a very beautiful person. She was very affectionate towards her family and friends. Nezuko always cared about them. She also helped her mother in cooking.  She also helped her mother in taking care of her younger brother and sister. Tanjiro and Nezuko were close to each other.  After becoming a demon she was First tried to attack Tanjiro but later protected him when Giyu attached Tanjiro which shows that even after becoming a demon the Nezuko has some humanity left in her.

It is seen that most of the Demons in the Demon slayer cant withstand Daylight. Most of the shows show it. But Nezukk being an exception is very good at handling the sunlight. It is seen in many instances that Nezuko is able to walk in sun even after becor a demon. She also healing capacity like most of the Demons to heal her when she gets burning or hurt. It is said that she has been the chosen one because she is an exception. As she sleeps most of the time Tanjiro always carry her box on his back so she can rest.

Nezuko comes from a family of powerful people as seen many times. Her father was a trained Fighter with his own fighting style of sun breathing. They are sword person who is especially in fighting. His brother Tanjiro has some abilities like her. Because of these traits, she is most powerful nowadays. The kamado family is said to be a decent dent of the Sun family. That is why Nezuko is natural. That is another reason why she is very fierce in her demonic form.

Unlike other demons who feed on human blood to live she didn’t attack on humans for blood instead she heals herself by sleeping more than usual. Her emotional capabilities is very high. She can control her emotions and human consciousness even after becoming a demon. When they fight with demons and Tanjiro is in danger she makes it to her and protected Tanjjro in many cases. She has manor changes after becoming a demon.

When shown many times she can use many techniques like a Demon against demons. Usually, demons don’t kill each other in a fight. She has immense power and strength. Her ‘ exploring demon blood art’ is becoming strongest. With her abilities, she has raise her skills and immense speed. She uses this blood demon art again in each fight.  With her unique ability and mastery towards demoninc power, she is becoming a dangerous person to deal with.

Many instance has been shown were the Nezuko reveal his natural demon powers and protected his Brother. But she also has a dangerous form in which she becomes uncontrollable and rages out at everyone. There seem to be horns coming out of her head when she goes in this form Vine marking appearance on her body in this Frome. In this form, she starts asking blood of human and killing them. Only Tanjiro can calm down in her this state. Tanjiro sings a song for her used by her mother to sing. It helps nezuko in coming to her back natural state. She is very risky at this stage and this Tanjiro always helps her come to a normal state.

B. she is always thinking about the family she lost to the demon She also thinks about her brother who is trying to help her come to a normal state.

C. Due to her special abilities she was constantly followed by Muzan so he can find out about how she is unable to burn even after in sun.