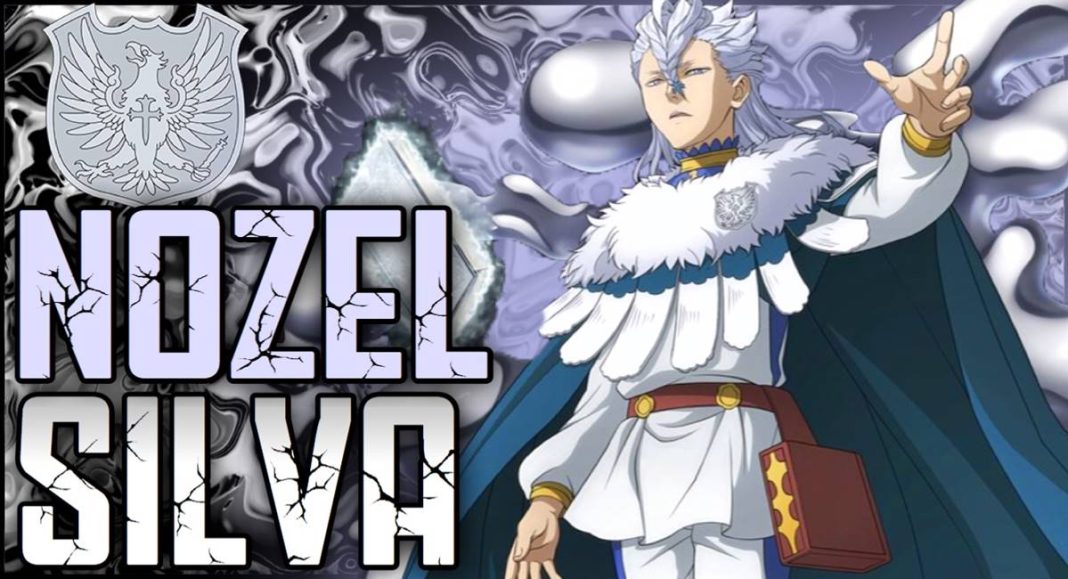 Nozel Silva is a nobleman and the eldest son of House Silva, the reigning dynasty of the Clover Kingdom. He is also the team captain of the Magic Knights’ Silver Eagle squad. We initially believed Nozel Silva was arrogant and an evil brother for Noelle when we first saw him. Though, he is the polar opposite. Let’s look at some Nozel Silva facts in this article.

Nozel Silva is a thin, fair-skinned man with narrow purple eyes and little brows. He has pale, silver-white hair, which he wears in an uncommon way, is occasionally mentioned by other characters. Nozel hair is long and straight in the back, but forcefully curled and swept back on the top and upper sides creating a huge spiky fringe. His long bangs are braided and dangle between his eyes and down to the tip of his nose, where he wears a little House Silva pendant. Nozel wears a squad robe that resembles pairs of feathered wings, two in the front and two in the back, six months after the elves’ attack.

Nozel dresses in the same way as his siblings, in a loose-fitting shirt with a high collar secured at the top by a gold ring but left open below to reveal his collarbone. He also wears flimsy sandals and loose jeans with tight bands below the knee. In addition, Nozel is dressed in the Silver Eagles’ traditional robe.

The robe comprises a short fur mantle and more extended frilled panels that extend down to the elbow. Like that of other squads, their squad symbol is worn on the left side of their robes. Nozel’s mantle also has a gown connected to it that reaches almost to his feet. On his left hip, he has his grimoire case.

8. Nozel Silva is an arrogant man.

Nozel, like the rest of House Silva, is an arrogant guy who believes he is superior to others. Despite his contempt for peasants and commoners, he takes his role as a Magic Knight seriously and holds himself and his brothers to high standards. When Solid disparages House Vermillion after Fuegoleon is seriously hurt, Nozel counters that House Silva is worse because they were not present during the battle.

Despite his pompous nature, Nozel shows hints of caring for and respecting those close to him. After being harmed, he declares that he will avenge Fuegoleon and subsequently mocks Fana’s magic, hinting that Fuegoleon’s flames were far patronizing to hers.

When Nozel is irritated, he can be very combative, despite his lack of expression. He openly despises Yami and taunts him on several occasions. When they argue over how he styles his hair, he threatens Yami and Asta. When Rill makes a Fuegoleon impression at the captain’s conference to lighten the mood, Nozel is one of the captains who furiously urges him to stop right away.

Nozel does not publicly love any of his siblings, but he particularly dislikes Noelle, whom he blames for their mother’s death. This is, however, to disguise his dread of losing her, who resembles their mother so closely, and after witnessing Noelle’s resilience and progress, he apologizes to her.

6. Nozel Silva was the firstborn.

House Silva’s first son, Nozel, was born. Nozel and Fuegoleon Vermillion grow up together as children and develop a rivalry. Nozel’s mother, Acier, gives Noelle when he is 14 years old and hides in a hidden location. Nozel takes Noelle and hides in the bushes during Vanica Zogratis’ onslaught while his mother fights Vanica. However, Noelle’s sobbing attracts Vanica’s attention. Vanica threatens to destroy the children, but Acier kills the devil host with a single stab. Vanica has been mortally injured, so Megicula curses Acier and Vanica flees. Due to an extra effect of the curse, Acier is gravely weakened and bedridden, and Nozel cannot speak about Megicula’s involvement.

He has incredible endurance, as evidenced by his ability to remain conscious and cast spells despite being punctured through numerous giant compass needles through the torso. Nozel, being a prince and captain of a Magic Knights Squad, wields enormous magical strength,

which Yami notes are more extensive than his own but less than that of a devil or the most extraordinary elves. He can build a tremendous pressure field around himself by releasing it, and he can manifest a gigantic eagle with his magical ability. Nozel’s magic necessitates pinpoint accuracy, and he can retain that level of precision even in dense, chaotic mana.

Nozel uses this magical ability to create and manipulate mercury. Nozel can mix offense and defense by shifting his mana’s shape at will, thanks to his rapid and accurate control of it. He uses this type of magic to improve his physical powers. Nozel uses this magic to shape items and creatures out of mercury.

Nozel has a three-leaf grimoire with a variety of mercury-based magic spells. He has a magical tool to construct a Healing Magic field. He has a tiny device to interact with his squad members. It is only capable of transmitting audio.

The rivalry between Nozel and Yami Sukehiro is identical to that between Nozel and Fuegoleon, except that their mutual disdain of one another ironically fuels their rivalry. Nozel is outraged by Yami’s misbehavior and frequently reminds him that he is a foreigner in the Clover Kingdom. Yami regards Nozel as pretentious and delights in mocking his haircut. However, they respect each other as fellow captains and formidable combatants, and they have demonstrated that they are more than eager to fight alongside one another when necessary.

The House of Silva has a firstborn, Nozel, and the House of Vermillion has a secondborn, Fuegoleon. They grew up together and became so enclosure that a rivalry developed between them. The animosity between them remains even after they both became Magic Knight captains. When Fuegoleon loses against the Eye of Midnight Sun, Nozel feels embarrassed because he could not assist him.

In Black Clover episode 108, a stunning secret about Nozel is revealed. It comes out that Nozel has been in love with Noelle all along. Following the death of their mother, Acier Silva, Nozel does not want to lose Noelle in the same way that he lost his mother. This is why Noelle is assigned to the Black Bull unit, which only receives challenging missions on rare occasions. He can keep Noelle out of harm’s way this way. Nozel, on the other hand, recognizes Noelle’s power and fights alongside her as she grows stronger.