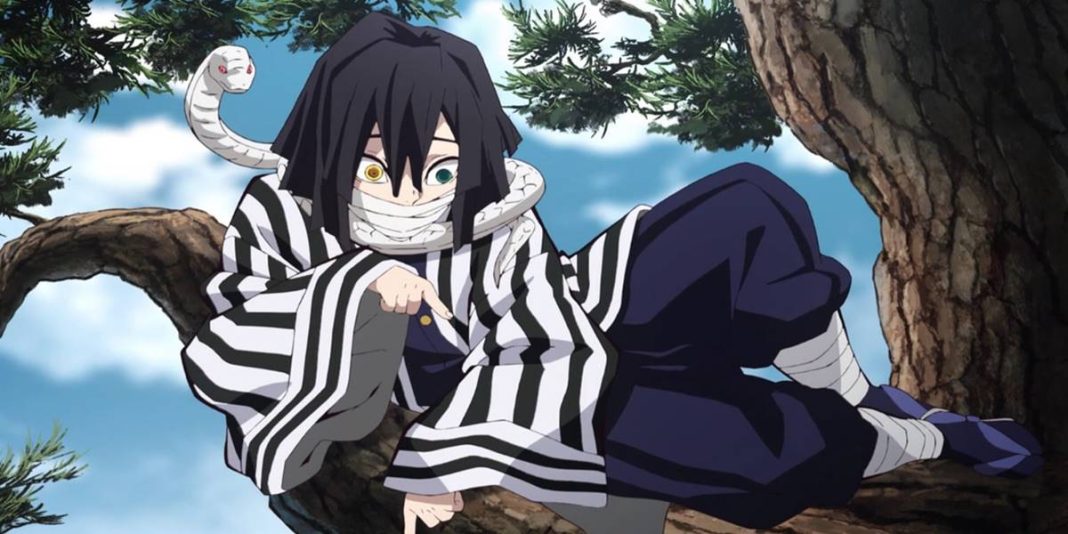 Obanai iguro: Hello friends how are you all? This blog is about another supporting character from the anime Demon slayer whose name is Obanai iguro. He is currently a member of the Demon slayer corps. He is also a hashira and known as snake or serpent hashira as his ability is to control snakes. As a member of the Demon slayer corps, he also follows the order of the Kagaya ubuyashiki. Obanai is one of those hashira who uses an unorthodox Breathing technique known as serpent breathing which he himself developed and later created and mastered all the forms.

Obanai iguro is one of the characters whose looks define them accurately. He is short heightened with a pale complexion. His hairs are very unusual and uneven reaching his shoulder and covering his face. His eyes appear to be just like snakes and he has heterochromia in eyes which is a disease that causes the color to change. Obanai one is yellow and another is green on torquise. His face is covere with a white mask. It is said that when he was young his mouth was cut till the ears just like a snake. A snake is wrapped around his neck always.

Talking about his personality, Obanai is a harsh person who shows no interest in anyone. He is strict and doesn’t respect anyone who doesn’t follow instructions. He shows no mercy in mocking his own fellow Hashiras when they suffer. Such an incident is seen when Tenzen was injured fighting the weakest upper rank, Obanai mocked him and said that he should leave the demon slayer corps as he is so weak that he doesn’t kill a Demon. He should give up his Hashira rank to someone more deserving.

Obanai was a person who didn’t care about anyone until he met Kagaya and joined the demon slayer corps under his guidance. He then followed all instructions of Kagaya and became a Hashira of demon slayer. He follows the code of conduct of Demon slayer and says that no one should disagree to follow the code of conduct and if anyone does it then he should be punished straight away. Obanai also helped Giyu and Tanjiro when in a fight with Muzan the strongest Demon. He was cornered during the fight but Tanjiro saved him. Later he is shown Thanking Tanjiro which shows that his heart changed.

Obanai is a personality of sheer determination and an incredible sense of justice. He shows no mercy against any demon and always does his best when fighting against them. During his fight with Muzan, Muzan threw his attack and made Obanai completely blind, yet obanai didn’t give up and fought against him till his last breathe. He also protected Giyu and Tanjiro against Muzan showing his ability to care for his fellow. Later he also changed his harsh attitude and became a friendly person.

Obanai was born in a family that worshipped a demon that had a face like a woman but a body like a snake. His family was a family of thieves who lived on the things and money they stole from the person whom the demon killed. That demon liked newborn babies and obanais family offered that demon newborn babies and in return that demon didn’t kill them. Obanai was the first boy born in 370 years in this family. He spends his childhood in a cage-like a box. He was given all the luxury and food. That demon didn’t kill him but always roaming around him and liked him. Obanai was frightened by the demon and tried to run. Demon almost killed him but he was saved by Flame hashira, a demon in return killed all his family members.

It is shown that Obanai has a snake around his neck, snake name is Kaburamaru. He found this snake when he was caged alone in a box. He was not allow to go outside and he was lonely. Obanai sometimes talked with Kaburamaru and wanted to leave that cage. He became successful in doing that after that Kaburamaru stayed with him around his neck. He considers Kaburamaru as his friend more than just a pet. During the fight, obanai was kill by the demon leaving Kaburamaru alone. Later with the help of Sanemi that snake was entruste with Kanao Tsuyuri who took care of him.

When obanais whole family was kill by the demon, the last person who remains was his cousin. When he returned his cousin abused him and said that he is responsible for the death of all his family members. Hurt by his words, obanai became a harsh person. His cousin also said that obanai should have sacrificed himself so that his clan lived. Obanai became a person with guilt and also decided to join demon Slayer just so that he can kill demons and make his rage come out on someone. He also became a person with no fear and self-love.

Obanai was the very lonely person who didn’t like people around him and spend his time mostly with his snake. He also hated women due to his upbringing and the demon he hated was also a female. When he first saw Mitsuri, he fell in love with her. He also followed Mitsuri everywhere since he found her to be very attractive snd beautiful. Obanai also thinks that Mitsuri will never accept him due to his appearance and past life. He considers himself to be so tainte because of deeds done by his clan that he would have to take birth again to be able to match with Mitsuri.

When Obanai faught with Muzan, he was fighting like a person who just wanted to win at any cost since he has no one to live for. The fight was so intense that he awakened his demon slayer mark that took the form of three snake-like patterns from his right hand and right side of his chest. He became so powerful at that time that even Muzan admired him. It greatly enhance his ability to attack and despite being severely injure, he stood on his ground despite being blind.

Obanai has a very versatile fighting style which he developed himself known as Serpent Breathing. In all Breathing styles, it was different since it uses the name of a Living Being. He was help by his Pet or friend Kaburamaru to master all the forms of the techniques. He mastered all these forms which he created. Some of them are the First form name Serpent flash which uses moves like a snake in a winding pattern and many others like Venom Fangs, coil choke, Twin head Reptile, Slithering serpent, etc. It was also found to be very effective against the poison which demons possess since it fights against that.