Home ANIME One Piece The Man Marked By Flames 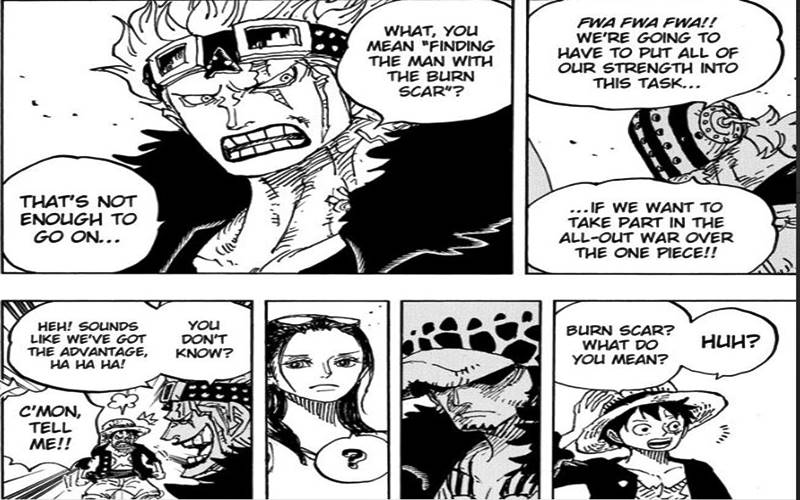 One Piece The Man Marked By Flames: Hi guys, I am back with another Hot Topic in the anime One Piece right now that is who is the character called The Man Marked by Flames? See One Piece Anime is full of unexpected twists and turns and every now and then we can see a new mystery come out and fans get confused and want to solve that mystery. With so many characters in the anime, it becomes even hard to get the right answer. One such question which is popping out now is who is this Man Marked by flames or a man with a burned scar on his face?

In Chapter 1056 Kid and Killer point out a “man with a burn scar” that may want to be key to the conflict for the One Piece. The point of this man “marked by means of flames” has spurred a lot of fascinating dialogue amongst Japanese readers,

so I thought I’d share some theorized candidates! The true identity of the man with flames is not revealed yet but based on his name, which shows that many characters are to be connected in the name of the man marked. Some of the words could be Admiral Kuzan, Sabo, Luffy’s father Monkey D. Dragon, or Blackbeard. There may be an introduction of a new character will introduce in the future,

someone more powerful and someone who knows more about One Piece treasure. In this article, I would like to tell you why this character will be so special and why he will be the one responsible for things that will happen in the Manga later. Here are some of the characters that may be the ones we are looking for the next time.

One main character who is first in the race to be called the man marked by the flames is the Admiral of the Navy, his nickname is “Aokiji” which means Blue Pheasant, he has the power to control ice which he got from his Devil Frozen Fruit. He is the representative of the navy on the motto of sloppy Justice.  Grand Admiral Sengoku wanted him as his successor.

He may be the one because he has a large scar on his face created by flames. He is the one who is around for a while and also it is expected that it is his nickname which will be revealed later in the series and will leave everyone shocked.

The next one who is on the list is Sabo, who is the second most senior member of the revolutionary army behind Monkey D. Dragon. He is another person who may be the man marked by flames as he has the scar that somehow perfectly fits the description and also he has a devil fruit that is focused on fire,

he has a brilliant story which made him popular among people and changed his perception over the years. There is a high chance that he is the person because over the years his story has not been told fully and he is only named as the assassin of Neferteri cobra. Also, he is the spiritual brother of Luffy and Portgas D. Ace,

and he is also the adopted brother of Sterry, the current king of the Kingdom of Goa, which makes sense that he is connected to the plot related to Luffy. He is the man market by the flames will be revealed in the future but we can’t say that it is necessary which is why there is no proof.

One of the most powerful characters who is in the race to be called the man marked by the flames is Blackbeard, also Marshall D. Teach, who is the admiral of the Blackbeard gang. He also has the same goal as Luffy, to find one piece and become the pirate king.

Blackbeard may be associated with both the One Piece mythology and the late Pirate King Xebeck’s mythology, but it doesn’t make much sense in that respect. I don’t think he’s likely to be a  candidate. More or less the kind of power he possesses makes him one of the biggest contenders for the position.

Urouge is a very powerful pirate, who is able to cross and reach half of the grand line. He is also one of the supernovae, fast and agile as a killer in a fight. However, Kizaru was able to easily defeat him with that power. During the time skip, he was able to defeat Charlotte Snack, one of the four Sweet Commanders of the Big Mom Pirates,

and the bounty reached 600 million berries, a testament to his strength. However, Urouge managed to survive and escape. He is the next character on the list to be said the man marked by the flames because he has a flame-shaped tattoo on his arms but it is to be revealed yet and we have to wait for it.

Monkey D. Dragon is Luffy’s father, who is the most wanted enemy of the world government and he is being hunted by assassinations and killers from the government. He wants to overthrow the World Government and he is able to control the weather with his will. He is another one to be called the man marked by the flames since he also has a tattoo on the left side of his face. It would be a great thing to see him as the man since it will be a great plot for the fans

and this will create a big impact on the story of the anime. Also, there are high chances that a new character might appear in the upcoming times since there are introductions of the characters every now and then in the anime which makes it difficult to predict who the man marked by the flames is

So here is the answer to the question of who the man market by flames is and I hope you are satisfied with the answer.