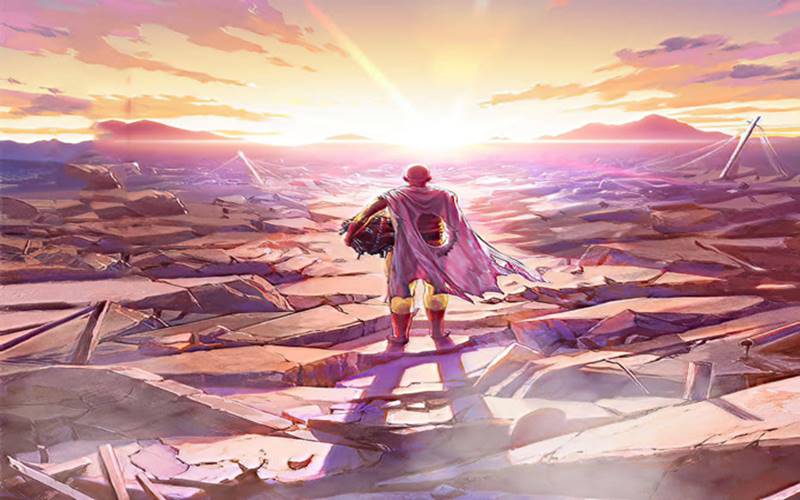 It’s taken me quite a number of days to prepare this review because time hasn’t really been friendly. But I’m happy i was able to do it all the same. This chapter was perfect in its entirety. It was a fitting conclusion to the Monster association saga. I rate it a perfect 10/10 for drama, intrigue and substance. Now join me as we review this chapter 15 pages at the time.

1A. From the first page, we can now conclude that Garou had sensory ability as he stated he couldn’t sense any presence before he was punched. And the reason this punch was so powerful and effective was simply because this was a punch from a future version of Saitama who had grown exponentially in power. And so, the punch was far too lethal for that version of Garou who was yet to begin his mimicry of Saitama’s abilities.

B. The next page shows the lower class Heroes identifying and preparing to exact their revenge on Garou for what he did to them in the past. These were mostly disciples of Tank top Master and other C-class heroes.

2. Once Genos connected and plugged in the core of the future version of himself from another timeline, memories of what transpired came flooding into him. Since this core was held by the future version of Saitama(who’s not a cyborg), all through his battle with Cosmic Garou, quantum energy, bearing the memories of all that transpired in that timeline were imbued into it. And so, as the bodies of his future and past self merged, Saitama lost his memories of what actually transpired but Genos’ mechanical core retained them. I believe this is a summary of Genos’ ambiguous explanations of the theory of relativity with regards to the occurrence of this phenomenon.

3. It’d seem that Saitama wasn’t the only one who traveled back in time. Temporarily but Somehow, Garou’s spirit made its way back to the past alongside Saitama long enough to see and awaken Tareo. It’s unclear if this was meant to save his past self or if he truly missed Tareo and wanted to see him one last time.

4A. The next 15 pages elucidates on the assault on Garou by the lower ranked heroes. Even though Garou had no understanding of why he lost so suddenly to a single punch by Saitama, he accepted his fate. And although he was still clad with the power of god and obviously had the power to beat up the Heroes bullying him, he didn’t resist this assault but instead taunted them more with the sole intention of provoking them to kill him. This was most likely because his past self had orchestrated everything.

B. Because Saitama interfered in the past and lost his memories, he had no idea that it was he who defeated Garou. And neither did the Heroes. Most especially Flashy flash who was suffering from vertigo as a result of the injuries he sustained in the battle with platinum sperm and Garou. Though he saw a naked silhouette, he couldn’t make out who exactly that was. And so he concluded it was Blast when in reality, it was actually Saitama.

5. In manga chapter 113, Homeless Emperor recounted his encounter with God to Zombie Man and how he acquired his power. Later in chapter 153, a visibly shocked Zombie Man witnessed the gruesome death of Homeless Emperor by an unknown force and personality. And so, it was no surprise that Zombie Man stopped the angry assault of the Heroes on Garou to inquire about the source of his power and any possible connection to god.

Similarly in chapter 138, Blast explained to Flashy flash and Saitama the existence of a mysterious being that communicates to people and grants them power via special heavy cubes. This mysterious being is non other than god. And so this was why Flash was able to bring Blast’s mention of God to remembrance.

6. Thanks to the timely intervention of Tareo and King, Garou was saved from the murderous hands of Sweet mask who was bent on executing the Hero Hunter for his crimes. Bang also commented that Garou wouldn’t be allowed to die that easily as he had to make atonements for the many crimes he committed. Saitama also supported this by saying that in the end, Garou’s goal to become ‘Absolute Evil’ only succeeded in exposing the goodness in his heart as he saved Bang, Genos and King from the hands of dragon level monsters in chapter 154. Though Garou escaped, Saitama had faith that he had changed for the best as he refuted Genos’ words that Garou was going to go back to committing crime. Going forward, he also had faith in Bang’s ability to rehabilitate his wayward disciple.

7A. Contrary to what happened in the webcomic, Metal knight and his army of robot drones suspiciously arrived when the battle was already over to clear the Nuclear Fallout that resulted from Garou’s Nuclear punches in chapter 165. He also ordered the heroes present to submit themselves for immediate nuclear poisoning decontamination. It’s unclear what motive Metal knight has for choosing to join the battle at this time when he outrightly refused to join the mission to rescue Waganma, son of Narinki, founder of the Hero Association in manga chapter 86. I surmise Bofoi has an ulterior motive for this. But time will tell what that really is.

B. It’s seem Z-city was completely destroyed during Tatsumaki’s battle with Psychos. It’s no wonder Saitama said once Dr Kuseno fixed Genos, they’d go to look for what is “left of their apartment”. It’d be interesting to see what happens from this moment forward as we march into the Neo heroes saga.

Thanks for reading this review. Please do leave a reaction or a comment if you can.