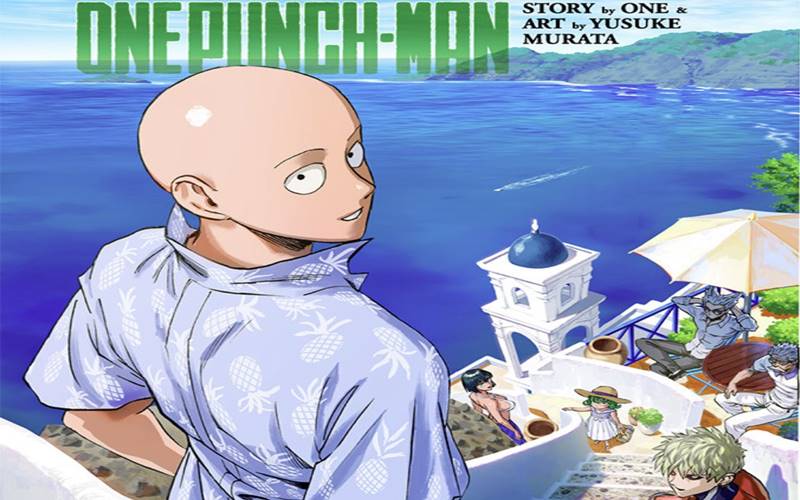 This chapter was awesome. It was the perfect conclusion to the Human monster arc and the best chapter Murata and ONE could leave the fans with before embarking on their one month break. Though there was no action whatsoever, this chapter had powerful moral lessons to teach. I rate it a perfect 10/10. Let’s review this chapter together.

1. The first three pages shows Garou comically lamenting on everything that had previously occured and also stressing on the reason why he chose the path of villainy in the first place. This was actually shown to be a DINE & DASH INVESTIGATION. Since the phrase ‘DINE & DASH’ means eating in a restaurant without paying, a DINE & DASH INVESTIGATION is simply a casual interrogation in a police station where a criminal is examined and assessed without being arrested. This is mainly due to the fact that the criminal has already been pardoned in one way or the other.

According to Garou, he believed absolute judgement was essential to keeping law and order no matter the cost. He further lamented that unlike Monsters, humans are seldom punished for their crime. He considered the one sided targeting of Monsters as an unfair treatment when humans are always allowed to get away with all sorts of evil deeds. And so, he became a hero Hunter to change that paradigm by becoming a monster no hero could take down. In the end though, Garou indeed regretted all of his wrong doings and chose repentance.

2. The next six pages shows us just how loving and caring a Master Bang really is. By forgiving Garou and staying by his side through all the examination and reconciliation process, he proved himself as the best father an orphan like Garou could ever have. For all he ever wanted for Garou was continually good and not evil. Garou himself came to see and embrace this fatherly love Bang had for him even though he found it very difficult to express.

It’d also seem Garou lost all the techniques and martial art secrets he had awoken as a monster after getting One punched by someone (Saitama) who he couldn’t identify.

3. The next four pages show a Totally matured and transformed Tareo. The boy who was once shy and timid now had a word of his own. Tareo could now stand up both for himself and what he believed in. A sudden change that shocked his friends.

What more, Tareo also displayed a heart of forgiveness. By choosing to forget what was done to him and being kind to the other children who once bullied, mocked, and took advantage of him in the past, Tareo showed what being a hero truly is all about. Even Waganma, Son of Narinki, founder of the Hero Association changed as a result of Tareo’s influence. Something that pleased his father very much.

4. Garou’s statement in the fourteenth panel/page of this chapter seems to have generated a great deal of debates and questions these past few days. While asking Bang to arrange a small fighting contest between him and all the Heroes he fought as a monster, Garou mentioned Blast. The question now is why did he mention Blast when he never fought him in the changed timeline?

Quite tricky indeed. But I believe the answer lies in the events of chapter 169 after Garou’s defeat at the hands of Saitama from the future. On the twentieth page/panel of chapter 169, we see Saitama suggesting Blast as the person who defeated Garou. Other heroes present seemed to have bought this suggestion. And so, it’s very much likely that Garou also bought it as well and concluded he fought Blast. This is the only reasonable explanation as to why he mentioned Blast amongst those he fought.

5. In a conversation between Sitch, Chairman of ‘The Earth is in danger prophecy counter-measure committee’ and Sekingar, Managing Director of the just concluded Monster Association hostage rescue operation, it is revealed that not only has Bang tendered his resignation letter, he had also chosen Garou as his successor. While this is a huge development considering the positive impact Bang has made both in the Hero Association and the world at large, it’d be a huge responsibility and void for Garou to fill both in Character, trust, and ability.

Sitch’s eagerness to see Garou replace Bang is very much understandable considering Shibabawa’s prophecy was slated to be fulfilled within 6 months of utterance. And so, having a boy of Garou’s skills and talent would bolster the Hero Association’s Ranks and increase their chances of victory. Sitch originally tried to do this in Manga chapter 40 when he assembled a gathering of both heroes and villains alike for the purpose of ensuring the survival of humanity come the fulfillment of Shibabawa’s prophecy. It’d interesting to see how Garou copes as a hero.

6. We further see Bang asking Garou if there’s any girl he likes to the later’s embarrassment. Garou however gives in and confesses that he likes a popular Sentai actress named Kiiro. Sentai is a Japanese military unit; a squadron, task force, group or wing. Kiiro seems to be an actress in a popular Sentai show considering Bang knows her as well.

7. Finally we see Genos and Saitama digging and searching the grounds of what’s left of their home in Z-city for any useful belongings they can salvage. We also see what looks to be a miniature Overgrown Rover secretly watching Saitama and Genos from a distance. In the Webcomic, Saitama adopted Rover and Black Sperm as his pets. It’d be safe to assume that he’d do same in the manga. Going forward, it’d be interesting to see where Saitama and Genos would live next.. I’m filled with great excitement at the resumption of the One punch man manga in a month’s time.

Thanks for reading this review. Please do live a reaction as usual or a comment if possible. Also, do share this review if you can. I’d love for more OPM fans to follow my posts. Thanks so much once again.