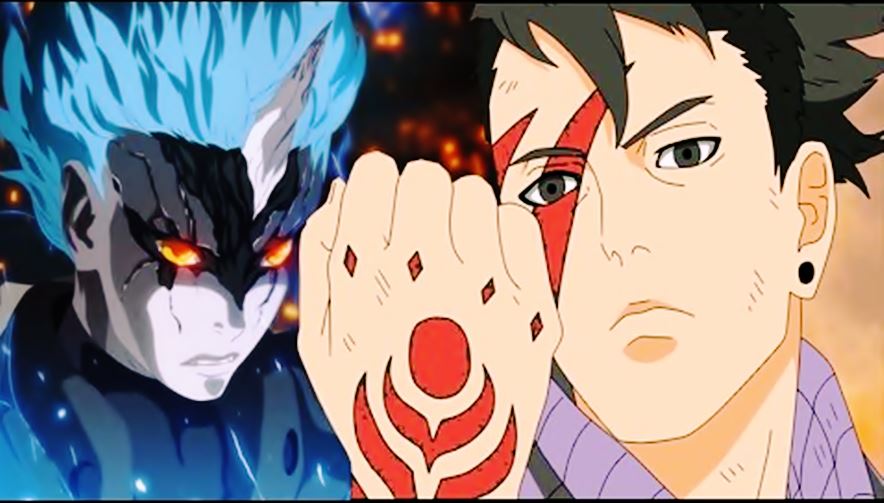 Katasuke Tōno and the other Hidden Leaf scientists were able to take some of Naruto Uzumaki’s DNA when they were growing him a new arm with the Hashirama’s cells. Sometime in the future they were able to take Sasuke Uchiha’s DNA. They did this to create the most powerful human ever as Naruto Uzumaki and Sasuke Uchiha are currently the most powerful chakra users known so far and accessible to the scientists. Katasuke Tōno and the other Hidden Leaf scientists for Kawaki is a synthetic human, They may have also been so jealous from Orochimaru synthetic human, Mitsuki, so they wanted to prove that they were better then Orochimaru They unknown 3rd Otsutsuki granted Kawaki his power resulting in him getting the sigils/marks on his arm just like Mitsuki granted Boruto Uzumaki his marks/sigils Boruto most likely met him after the Chunnin Exams and became friends with him Unfortunately Kawaki gained a mind of his own and as a result of how he percieved the shinobi life, he wanted to end the era of shinobi as he didn’t like it He is highly likely to be a new character and not Iwabe or any other people that other theories suggest He may also have his Senju hairstyle as a result of them maybe adding Hashirama Senju’s cells in to the mix, possibly allowing Kawaki to use Wood Release P.S Tsunade’s younger brother was called Nawaki Senju Therefore we can expect Kawaki to be a worthy opponent for Boruto Uzumaki and it will be a battle as Naruto vs Pain or Naruto & Sasuke vs Kaguya if not better.