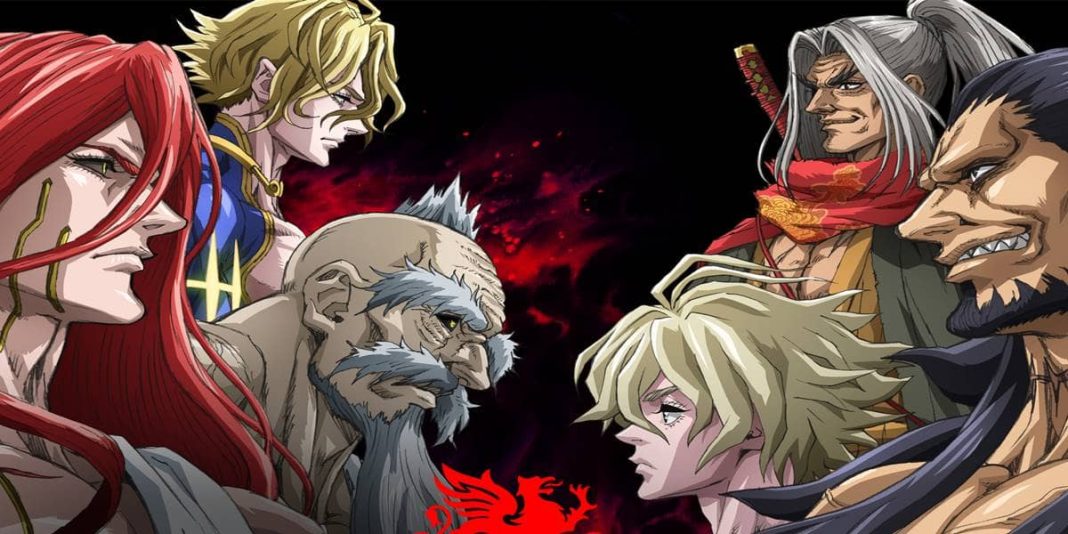 Record of Ragnarok: Top 10 Strongest Characters in the Series

Record of Ragnarok: Record of Ragnarok’s series manga began performing worldwide in 2017 and has grown in popularity ever since. His talented writers Shinya Umemura and Takumi Fukui and their fantastic team of illustrators Ajichika should be grateful for this. So, here are the 10 most powerful characters in the Ragnarok ranking. Not only is

Manga is beautifully and painstakingly detailed. It follows a very optimistic and heart-breaking storyline that blurs the boundaries of who the fans want to support. His recent animations are now selectively shown on Netflix. The current manga consists of 11 volumes and 55 chapters, and the art style and elaborate battle scenes will intrigue you. The plot of this manga revolves around a meeting of the gods that take place every 1000 years and determine humanity’s fate.

Poseidon, the god of the sea, specialized in hydro kinesis and showed this in the third battle. His sacred weapon is the trident, which helps him deliver fast, powerful strikes. God’s skill, Amphitrite, is a trident attack that follows a circular pattern and deals excellent damage when accompanied by God’s lightning.

Lightning-speed continuous trident attacks create water afterimages. And the 40-day flood attack surrounds the opponent with a water dome that symbolizes the rapid onslaught of the trident.

Kojiro Sasaki is the biggest loser in history and was introduced in Chapter 13 of the manga. He has a unique disposition for swordsmanship and later became known as the strongest swordsman. Rapidly advancing skills, the ability to develop strengths, great observation, and a desire to be strong will lead him to victory in most situations.

With the power of visualization and the ability to protect thousands of images, his visual training allows him to analyze his opponents and predict their movements. He can also fight someone and instantly copy and clone his sword style. In addition, it has tremendous reflex control abilities, which helps to practice the Ganryu style.

Ha-jun suddenly appeared and destroyed half of Helheim, so he is called the Six Heavenly Demon King. He is from Zero Fuku, but his personality is not the same. So far, Ha-jun has only used the celestial magic that has broken through his Buddha’s defenses. However, it also possesses tremendous pure power capable of large-scale destruction.

Hades Greek god of the underworld and the brother of Zeus. Although he didn’t show his strength, we can expect her to be on par with Zeus. Because he is the only one who rules the underworld, as a god, he is expected to have divine powers, immortality, and authority.

Thor, The God of thunder, is known as the most potent Norse warrior and god. His solid physical qualities helped him wield Mjolnir alone and also helped defeat 66 Jottun alone. He also possesses the power of electric movement to destroy enemies using lightning through his divine weapon.

This Thor’s Hammer skill allows you to summon lightning and infuse it into Mjolnir. His other skill, Geirrod, causes him to throw Mjolnir and causes a boomerang effect that doubles the destructive power when he returns. In the awakened state, Mjolnir is melt by electricity, giving his opponent defeat.

Odin is portrayed as an older man with an eye patch, a whimsical hairstyle, and two hoodies on his shoulders, so you can probably communicate with him. I haven’t seen Odin’s abilities appear on a large scale yet, but I do know that Loki has the wisdom to see through bluffs.

This leads us to assume that bluffing or cheating in dealing with him may not work. We’ve also shown his ability to disintegrate the life-consuming life of those around him, which can be fatal to anyone fighting him unless he resists ranged attacks or sacred weapons.

Hindu god of destruction, first introduced in Chapter 1, with 4 arms and 3 eyes, making it more open to various attacks and ranges. But his true power lies in fighting dance. Swarga’s hidden treasure is one of them, which increases his attack speed, making his attack patterns unreadable.

The second is Tandava, which increases your heart rate, attack speed, and body temperature to literally terrifying levels. Finally, the third and deadliest war dance is Tandava Karma, in which his body is ignite from the inside out, burning the victim and eventually turning to ashes.

Zeus is known as the godfather of the universe and chairman of the council of gods. Although fragile, he is one of the most powerful gods in Nordic history. In the battle of Hercules and Ares, he fired from both sides, effectively stopping the battle. He also has a divine skill called the Meteor Jab that can attack in 0.01 seconds and land attacks 10x faster.

His other skill, the Timeless Fist, is a deadly blow in the fight against Chronos, who personifies time to stop time. In his newest form, called Adams, Zeus can grip muscles and even destroy the skies.

In the final chapter, the Buddha is portray as a god-hating, selfish egotist who takes man’s side. He is one of the four stars, with quick reflexes, great strength, and incredible flexibility.

But, armed with the staff of the six kingdoms and the eight senses that can see the future after enlightenment, he is a cunning foe. However, his most impressive skill is the eleven-faced Guanyin Ahimsa, which turns his sacred weapon into a Buddhist sutra shield.

The first human being and humanity’s father is a man with a strong will to protect his family. He can replicate any attack directed at him with his quick reflexes, muscular body, and God’s Eye. This favorite puts the ability to copy and counterat-tack before fully seeing the attack at the top of this list. And he’s also one of the cutest characters because he uses his brass knuckles Welland to fight to the death to give humanity hope.

Hermes is generally known as the Messenger of the Gods. But, based on what we’re mindful of, his heavenly weapon is undoubtedly his violin. Hermes most presumably has a force identified with music or violin control. Further, he ended up being more talented than Ares in understanding the execution of most assaults.

Indeed, that is it for our list of Top 10 Strongest Characters in Record of Ragnarok Rank. What’s more, as each side conveys its best and most ground contender, our eyes will be genuinely honor with remarkable characters forme from the real world and history itself, and the series is simply going to improve.