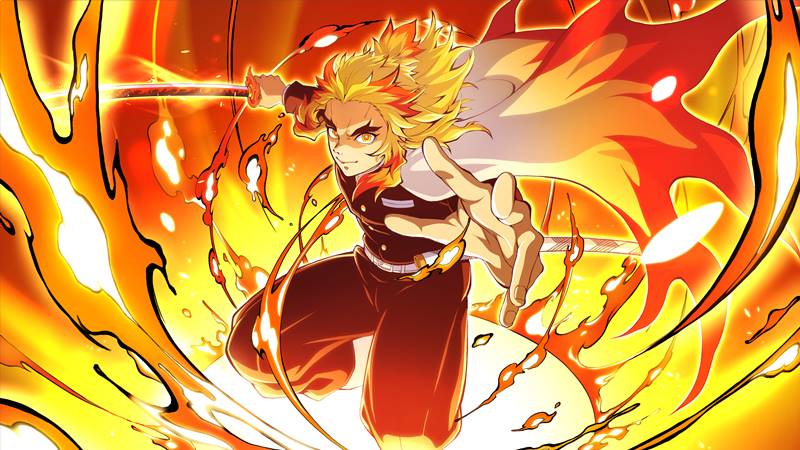 Rengoku: Hello friends how are you? This blog is about Kyujoru Rengoku the character of Series demon slayer. Rengoku was first introduced in “The Mugen train arc” of the anime series. He is not explored in the first season of the series but he will be all favorite once the new season drops. Rengoku is one of the hashira and also a very smart and heroic person. He will be seen fighting with demons and killing them in season 2 of the demon slayer. Here are some facts about Kyojuro rengoku.

Talking about his appearance he is a very bright-looking young tall man. He has long red-orange hair with the same eyes. He has a bright happy face. Rengoku is athletic and very cheerful. He wears his demon Slayer uniform with a long red white coat. In his first appearance itself, he said that he pity Tanjiro and wanted to kill him and his sister. He then says he has also been enjoying the comp of demon slayer corps.

He is a cheerful person, no matter what happens he is always happy. He says that he always remains happy. Rengoku helps others in difficult situations. He does his duties as hashira with pure enthusiasm. His heart is pure of love for others. He is a warrior who believes in a code of conduct and moral values. From a young age, he was taught that he should be respectful and help others by his parents.

He is also a great foody. He likes to eat anything which comes in front of him. Rengoku likes to explore different flavors. He can eat anywhere he gets food. He likes to express his emotions when he eats anything he says”delicious”  which shows that he is very into his food. Whenever he sees any food wanderers roaming and selling anything he buys all the food items from them. He then shares the food with his friends and fellow comrades.

4. Rengoku Relationship with others

His relationship with others is good with everyone. His fellow comrades respect him a lot. They say that Rengoku is a funny man. His relationship with Tanjiro, Inosuke, and Zenitsu grew very good just even after meeting them on the train. He also said that he would train them without even a penny and asked them to become his apprentice. His first disliked Nezuko because she was a demon but later when he saw Nezuko protecting Humans he decided not to hate her. His fellow hashira always loved him and said that he is the most polite and lovable and helpful person.

Kyojuro loves his family more than anything. He always respected his father, Shinjuro Rengoku, and got his initial training to become a demon slayer from him. His father was also a great fighter. His father told him that you should always help others whatever the situation is. Rengoku also had a younger brother, Senjuro Rengoku whom he also trained to fight. He was kind to them no matter what. But slowly his father was growing apathetic towards him. He said that he loves his father and no matter what happens he will protect them.

Under his funny and easy-going personality. He is a skilled fighter and tactical person when it comes to fighting with demons.  His ability to fight with demons is impeccable. When someone is attacked by a demon and is in danger he uses his mind, acts quickly to fight the demons. He also is optimistic when it comes to his friends. He also is great at accepting and appreciating talents whether they are demons or human. Even with his final fight with one of the twelve moons Akaza he lasted till his last breath, even came close to cutting his neck. He used all his energy to fight Akaza and protect others. He was successful in protecting others even after he lost his life. As he was dying to be said that he is happy because he died while saving the life of others.

This technique of Flame Breathing was taught to him by his father who was himself a flame hashira. He is known as flame hashira because he uses a flame to fight and kill his enemies. Rengoku read the book left by his father on a flame Master technique he read these books and became a master in this technique. He became so proficient in this style which we can see in his Fight with upper rank three Akaza, and lower rank Hairo. Tha technique has nine forms in which he mastered all of them.

He has immense endurance and stamina as compared to a normal human being. That is why he is a hashira of the upper level. They have to fight with demons who are very dangerous and threats to human lives. When in train fighting enmu he protected every member of the train while fighting with demons which shows his speed and stamina. He can fight with them without stopping.

9. the First hashira to be killed

If haven’t watched it then it is a spoiler for you guys. When fighting with Akaza upper moon he let his all power out and then gave his life while protecting others. He fought well on the train and saved everyone on it until Akaza appeared. Rengoku then fought with Akaza to protect Tanjiro and their friends from Akaza. It was a disastrous battle in which he was badly injured. He came very close to beating Akaza but the ability of demons to regenerate was very quick. Rengoku fought till his last breath but was killed by Akaza.

10. Acknowledged by Akaza the demon

While fighting with demon Akaza, Rengoku came so close to beating him. Akaza was also shocked to see humans fighting like this against him. He was shocked to see Rengoku speed and power of his blade. Akaza also said that he will leave Rengoku alive and offered to turn him into a demon so that he can be more powerful. Rengoku denied this offer and fought him during the long dark night. At night demons are more powerful which is another reason why Rengoku lost the battle.