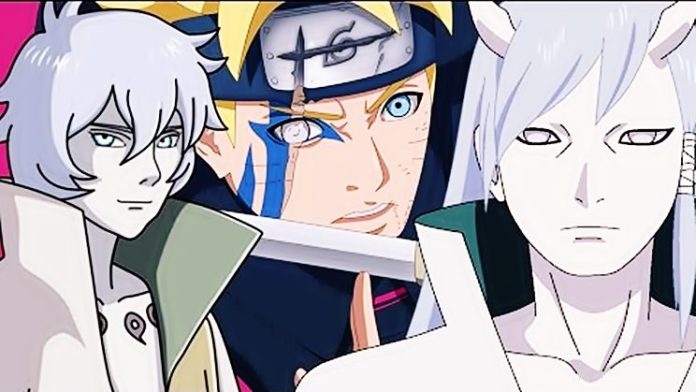 We know that Hamura Otsutsuki blood line has byakugan then tensigan and six paths (Hagoromo) has sharingan then mangeko sharingan change into rinnegan so what if you combined those two chakras what eyes Rinnegan + Tensigan would you get, powers of them and possibility of Uzumaki boruto having them??

Rinne Sharingan seems to be a result of eating the chakra fruit, at least for Kaguya it was. Where the Tenseigan fits and how Hamura Otsutsuki got it is unknown.

As for the Tenseigan, it personally strikes me like the (MS) Mangekyo Sharingan, it’s an advanced form, seeing as it literally takes having Byakugan eyes to form it. Difference being it seems to take combining 2 powerful chakras to manifest it, rather than pain of loss

When Otsutsuki Toneri was draining chakra from Uzumaki Naruto, Hyuga Hinata used her own to mix with Naruto’s, preventing Otsutsuki Toneri from draining anymore for whatever reason, he couldn’t drain Otsutsuki Hamura’s chakra, when at the start of the movie he drained Hyuga Hinata’s chakra entirely (before she met Otsutsuki Hamura). As well as using it to destroy the Tenseigan Energy Vessel before that, with some help from Uzumaki Naruto

Hyuga Hinata even said that Otsutsuki Hamura’s chakra flows within her when questioned about how from Otsutsuki Toneri- it shows well, considering that it changed her Twin Lion Fists color from blue to purple Uchiha Sasuke had a similar thing happen to his Chidori when channeling his half of Otsutsuki Hagoromo’s power/chakra

As far as descendant though, that’s about as far as any Hyugas being descended from the Otsutsuki clan, there’s no proof it was anything more direct. Even Otsutsuki Hamura’s title of Byakugan Princess seemed to be because Hyuga Hinata chakra was pure ‘simply’ because of that fact, rather than anything truly special. Or least that’s how I saw it.