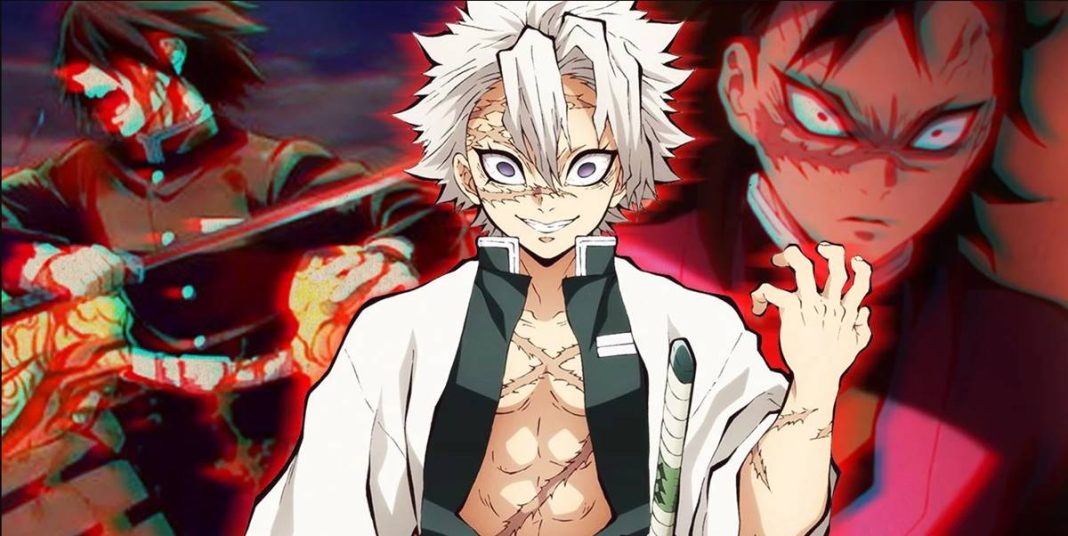 Sanemi: Hello friends. I hope you are doing great. This blog is about one of the most underrated yet important people from Demon Slayer, Sanemi Shinazugawa. He is one of the loudest and strongest characters in the series. One of the Hashiras and also a member of the demon slayer corps. Sanemi is also one of the characters who also fought with demons even before becoming a Demon slayer. He faught many demons and finally became a hashira. Here are some interesting facts about him.

Sanemi is a tall man with a muscular body. His eyes are pale purple which is very bright and his hair colors are white. He fought many demons and as result, he has several scars on his body and face. He cut his hair short before the Mugen train arc. Sanemi wears a Demon slayer corps uniform keeping his front unbuttoned showing his abs. He is a powerful person but also during the fight with Kokushibo he loses his fingers. Though being able to fight till the end and coming out alive.

As seen from every instance Sanemi Shinazugawa is a person who is always in a rude mood. He is a stubborn person and very hot-blooded. His rude behavior is because he has lost many person who was important to him. But his anger is only controlled by Kagaya ubuyashiki whom Sanemi respected after he found out that  Kagaya is much more than a normal person what he is shown outside. Kagaya helped Sanemi cool down somewhat leaving him less angry. His behavior somehow changed after he became Demon slayer and later a hashira.

3. Deep hate towards the demon

Sanemi had a large family, he lived happily with them unless they were killed by the demons. He lost his family members and also his friends to a demon attack. He has a deep hatred towards the demons and he says that demons and humans can’t coexist. When he wants to do something he just does it without even thinking anything about results. In such an incident when he first meet Tanjiro and Nezuko, he tried killing Nezuko because she was a demon. He stabbed Nezuko with his sword until Tanjiro stops him. He stops after Nezuko Denise to drink blood when he offered her blood by cutting his hands. Sanemi still doesn’t trust them fully.

Sanemi has only one alive member in his family that is his younger brother Genya Shinazugawa. When Genya decided to join Demon slayer corps in search of Sanemi. Sanemi abused him and asks to leave him and the demon slayer corps. He always tried to push Genya away from him. But after all these things he didn’t hate him fully. He just wanted to Genya to be away from him so that he can live a happy life, marry and have a family, not like him living life killing demons. He wanted Genya to settle down and live a happy life with his family.

Sanemi loved with his parents and six other children. His father abused him but he was killed by someone. His mother raised them alone but later she was turned into a demon. She later killed her five children and when she was about to kill Genya, the only left one, Sanemi killed his mother to save him. Sanemi was wounded badly and his face was scarred by her attack. His brother instead accused him of killing his mother. In return Sanemi was shocked and left him to hunt and kill demons.

Sanemi was the one who awakened his demon Slayer mark while fighting with Kokushibo upper rank one. He awakened his mark that looked like a windmill appeared on his cheeks. The mark increased his ability to a maximum level such that he can easily fight with Kokushibo. But even after awakening his demon slayer mark, he was not able to fight and kill Kokushibo. Muichiro and Gyomei helped him and killed Kokushibo. If they didn’t help Sanemi Kokushibo would have easily killed him.

Though being a hot-headed and person who doesn’t care about anyone he is considered to be the second strongest hashira in the series after Gyomei himejima. He possesses incredible speed and reflects. Despite having numerous scars and cuts all over his body, he never shows any sign of pain. When he fought with Muzan for almost an hour without stopping. He made Muzan to corner up. Muzan also got impressed with his fighting abilities and said that Sanemi has surpassed the powers of a normal human being and he is very fatak now.

In anime, it is shown that Marechi is a special type of blood that attracts demons more than normal blood. Sanemi also possessed this blood type that is why demons were attracted towards him. His blood is so powerful that a small amount of blood can make demons lose focus immediately. Kokushibo also got attracted toward his blood but he somehow controlled. The same case with Nezuko is resisted even when Sanemi offered his blood to her, showing Nezuko can control the bloodthirst as Sakonji taught her.

Sanemi is a special gift ability of contracting his muscles up to certain levels. He has the ability to manipulate his muscles in close fights and prevent fatal and vital wounds, this helps him in preventing bleeding in fights. When fighting with Kokushibo he has been shown to have recovered his abdomen wounds fastly. And also when he was fighting he used his brother’s sword and gun in conjunction with his own blads showing his ability to control weapons.

He is one the hashira who uses Wind breathing techniques as fighting techniques. Sanemi learned this technique with his friend Masachiko Kumeno. He has mastered his technique in search of the demons. This technique has many forms but he uses some forms some of them are Dust whirlwind cutter, claws purifying wind, clean storm tree, rising dust storm, cold mountain wind, black wind mountain mist, gale sudden gusts etc. He also uses Nichirin blades or Katana