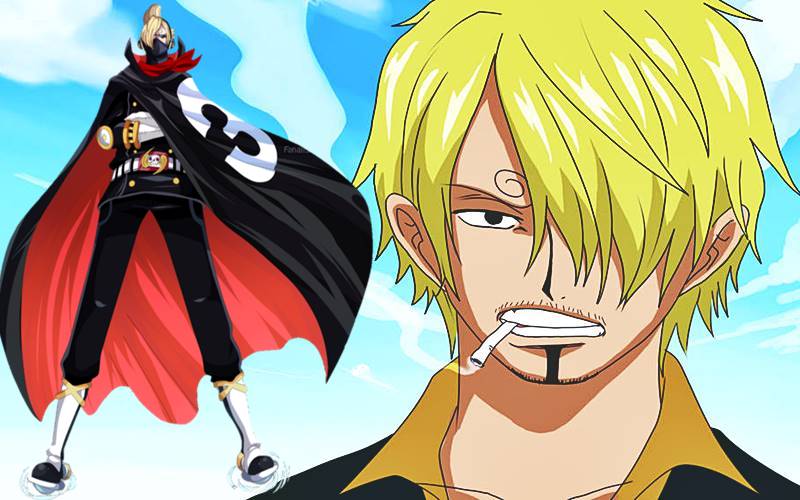 Sanji: In this blog, we are going to see ten interesting facts about Vinsmoke Sanji. He was a chef at the sea pirates. Sanji is a man who hates his family and doesn’t want to go back to them. He is very loyal and compassionate towards his job. Let us see some Infos about him that makes him special from others.

Sanji got a Raid Suit from his brother Niji at the end of the Whole Cake Island Arc. At first, he doesn’t use it thinking of his horrible past from his family. But anyway he forgets it and starts to use the Raid Suit several times during the Wano Country arc. Having the Raid Suit, Sanji comes to number three Stealth Black in Germa. This gives Sanji a lot of power upgrades like increased speed, power, endurance, and durability. His Raid Suit can blend in with his background. This gives him pseudo invisibility.

Sanji’s mother’s name is Sora. She was the only member of the Sanji family to show love and affection towards Sanji. Even back the boy loved her so much. Sora encourages his son in all aspects and expresses him in a manner that is right to him. Also, she encouraged him in his cooking. But his father never liked him cooking. Sora is a very loving and kind mother and among all the children she has, she gave all the love and affection to Sanji.

The third prince of the Germa kingdom is Sanji. It was before he was banished by his father, Vinsmoke Judge. All the Sanji’s siblings are genetically modified super-soldiers. he is not this. It was because Sanji’s mother took precautionary actions. So he was born not having superhuman abilities. In his childhood days, he has to suffer for this. His siblings would gang up against him taking the advantage of his physical inferiority. So he grew up hating his family and with the help of his sister Reiju he escaped from the Germa Kingdom.

Sanji someway escaped from the stubborn Germa kingdom and he managed his way around East Blue. Sanji starts to wanders around East Blue before he was going to become a chef in the ship Orbit. The Orbit faced an attack by Zeff on the sea. Many interesting events took place and a thunderstorm causes cataclysmic changes damaging both the Orbit and Zeff’s ship. Sanji and Zeff someway managed to escape but they were stranded on an island. Also, they were having less food. It was revealed that Zeff give Sanji the food he had. It was before he was going to eat his leg for a living. This action made endeared Zeff not only to the audience but also to Sanji. So He was the most loved One Piece Character.

One of the longstanding members of the Straw Hat Pirates is Sanji. His joining was during the East Blue Saga and it was after he was invited onto the ship by Luffy. After that, the role of the ship’s chef belongs to Sanji. Treating the crew members with the highest nutritional value food was the main priority of Sanji. He know the importance of feeding the crew good meals as there were occurrences where pirates died due to malnutrition and starvation. Like other Straw Hats, he is very loyal to the Straw Hats’ ultimate mission. He sacrificed his dreams so that other crew members’ dreams come true.

Sanji returned stronger than ever after a two-year training stint on Momoiro Island. Sanji spent a lot of his training time fleeing from the Okamas of the Kamabakka Islands, which helped him gain strength, stamina, and power. Because he was away from women for two years, Sanji’s passion grew stronger, and when he returned to Sabaody, he was able to generate more flames from his body, which burned even hotter than before. Sanji’s appearance changed as well, with the most notable difference being a new hairstyle that revealed the previously hidden left part of his face.

Sanji is a fiery character with a spirit that never dies. Flames are frequently used to represent this spirit. These flames can be ignited at any time by Sanji, and they can cause severe burn damage. This heat-based ability is typically used in conjunction with Sanji’s Daible Jambe methods. Sanji’s destructive skills are substantially increased when he combines his kicks with the flames.

Sanji is a very gentleman and we can see this many times. But he is a flat-out doting pervert. He is very excited when there are some females around him. This showcases his lack of self-control. And we can see massive nosebleeds which hinder from time to time. One such incident was during the Fish-Man island arc. He was near to losing his life due to a nosebleed. He received it after meeting a pair of mermaids

9) Search for All Blue

The main reason why Sanji joined the Straw Hat was to go out and search for a fabled ocean known as the All Blue. Four oceans make the One Piece world. These oceans have strange and mysterious creatures. The four seas meet and the part is believed to be called All Blue. We can find some rarest animals in that location. he had dreamt that one day this ocean will use its marine life to use his skills as a chef.

Sanji is known for his kicks. His body is very flexible. He can fight from any angle and can give powerful kicks. he takes his job very seriously. This job led him to develop a fighting style that is based only on kicking. This is to protect his hands. Because he can’t forgive it if he loses it which he uses for cooking the meals. This fighting style has a name and Sanji is given the name ‘ Black Leg’. This is due to his potent kicking power.