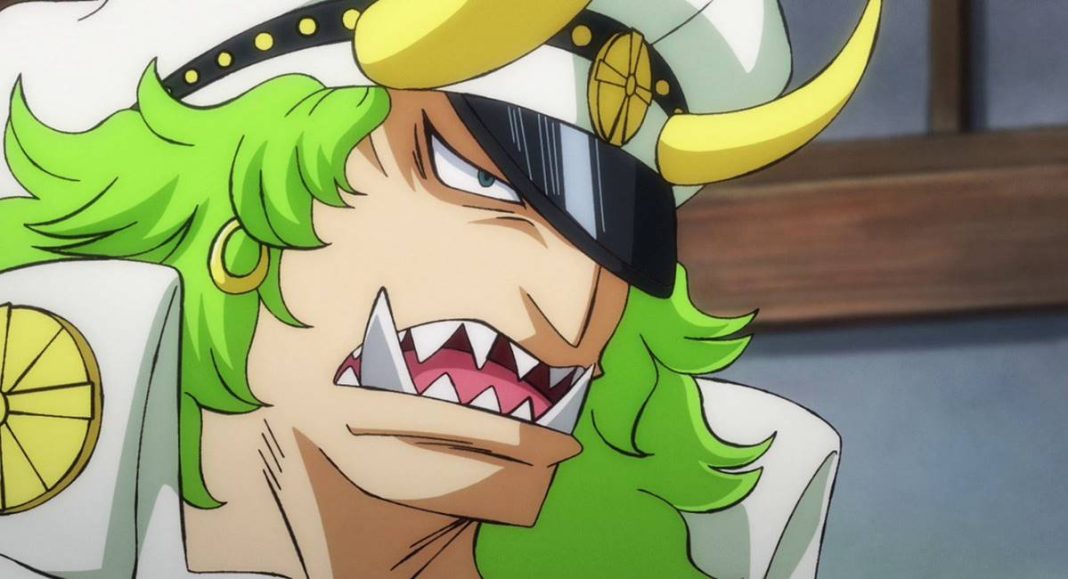 Sasaki: Hello friends how are you all? Today in this blog I am going to write about one of the members from Tobi roppo from  One piece named Sasaki. The strongest six shinuchi of the Beast Pirates and also leads the crew armored division. He is a great personality with high intelligence and possesses a high amount of fighting skills. He has fought numerous fights and captained a crew under him. Due to his work and past life he is a villain in the series. Here are some facts about him.

As shown in both manga and anime he is a tall man with light skin and an average body. He has sharp eyes which cover his face and show that his nose is a bit large. He has shaggy hairs and which reach his lower back. Sasaki also has a tattoo located around his shoulder area, upper arms, and back. He wears a mix of Japanese and military dictator-type dresses. He was also born in the Grand line which he said to allow his past life formation.

In the anime he is calm and an easy-going man with a great personality. Sometimes he just scoffs at some persons higher than him. But also he has been shown that those whom he considers friends he works with them and also help them. But he doesn’t tolerate those who betray him. when his subordinates were against him by the power of devil fruit .he still doesn’t hesitate to fight against them.

Sasaki has been shown to have a beast personality when it comes to fighting. Also, he is shown to have a high amount of disregard to his senior authority. He behaves like this cause he was once a captain of a crew of his own. He has a high degree of confidence in himself and his strength, which makes his challenge all-stars. But he also takes pride in the member of Tobi roppo.

Sasaki is said to be the master of combat. He takes complete pride in his abilities and he also believes that his ability of dinosaur will help him because he thinks that the dinosaur is the strongest animal ever lived on the planet. He is sometimes behaving like an arrogant person and when something wrong goes in the fights he doesn’t consider them as mistakes.

Sasaki is said to be a party lover when it comes to the celebration. Kyoshiro says that Sasaki is fond of partying since he was captain of the crew. When he was outside of the golden Kagura he was not showing his presence in the party because he tends to remain in solitude. He also enjoys drinking. It was also seen that he searched for the Yamato with his bottle in his hand. His subordinates say that he also enjoys drinking with none other than Kaido.

6. Sasaki relation with the crew

When it comes to respecting the member of the Tobi roppo, he seems to have respect among everyone. Once when Ulti insulted his boss, Sasaki was not impressed with him. He also said to show his interest to drink with Kaidou. Also, like Who’s who, he also hates All-stars and sees them as obstacles in his pots. He also doesn’t take any order from them until Kaido name is attach to it. While he enjoys the company of the Tobi roppo around him, Sasaki sees them as obstacles and wants to go above them in rank. He also mocked X drake and Page one for getting to a higher rank. Also TobiRoppo and Sasaki and Who’s who is considered to be most dangerous. Sasaki is also a man with a big heart when it comes to the things like saving his crew against the enemies without caring about his life.

Sasaki is considere to be one of the most dangerous and powerful members of the Tobi Roppo crew. Only Kaidaou and All-stars ranked above him as shown. He is the leader of the powerful crew Armored Division. Sasaki has full command over his crew and follows his order fully. He has the third-largest bounty in the Tobi Roppo member. His power can be seen against Franky who was his biggest enemy and almost defeated him.

Sasaki was also one of those who ate the devil fruit. He ate the fruit named Ryu Ryu no MI, triceratops, an ancient zoan type Devil Fruit that allows him to transform into a Triceratops and human Triceratops hybrid at any will. This devil fruit grants him the ability of immense strength and also uses his full power against them in the process. His skin becomes hard like a Dinosaur which increases his durability and his power of things. He developed three longhorns on his head.

Sasaki has a special kind of sword that he uses named as Karakuri Rasento. The sword also has a rotational thing attached to it in the shaft which allows the blade to spin at high speed whenever Sasaki activates it.  Thus the sword behaves like a drill machine when attacked perpendicularly from the center blade. With this blade, he can easily cut off shred supports and things attached to it. His ancient Zoan transformation allows him to charge at his opponents.

A. He is said to be the most important and dangerous character among the Tobi Roppo. He was name after the card game “44A” also known as Sasaki, a popular card game in North Korea.

B. He is also a character who can transform into a Giant Dinosaur and thus making him almost difficult to stop. His favorite food is said to be Asparagus which seems that he is a herbivorous animal.

C.  His appetite for Alcohol is known by everyone but since his time has been known. He serves it in an overflowing style which makes it more difficult to understand what is going in.