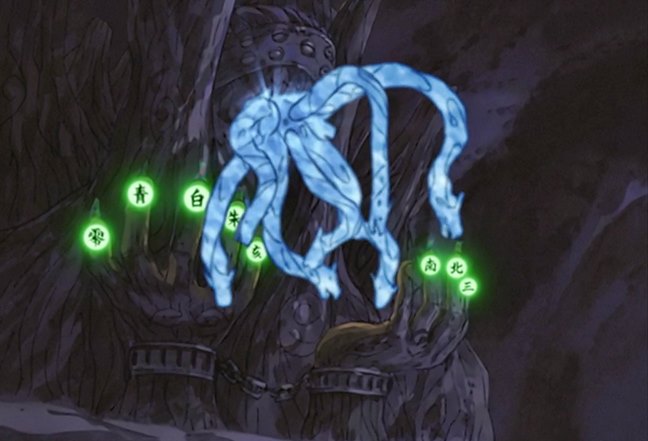 The Sealing Technique Phantom Dragons Nine Consuming Seals (Fuinjutsu: Genryu Kyufujin) is a technique that was used by Pain (Nagato) and the other all members of Akatsuki to forcibly seal a tailed beast or to extract a still living jinchuriki’s tailed beast chakra into the Gedo Statue (Demonic Statue of the Outer Path). The technique took three full day’s to complete if nine of the all Akatsuki members were present. Black/White Zetsu stated that if there are fewer people to perform the Jutsu (technique), it would take a while longer.

To prepare for the technique, Pain (Nagato) would summon the Gedo Statue, after which each member would then stand on one of Gedo Statue fingertips, corresponding to their specific ring finger. When performed, this Jutsu (technique) caused the bit to fall out of the mouth of the Gedo Statue. Each of the Akatsuki member’s would then concentrate, causing the kanji of their rings to appear on the nail of the Gedo Statue finger they were standing on. Nine dragon like effigies then poured from the Gedo statue’s mouth, surrounded the captured host, and the painfully removed the tailed beast from jinchuriki. In the case of an unsealed the tailed beast, the same thing happened to the beast itself, and still took as much time as if it were sealed. After the Sealing process was complete, the beast was sealed within the Gedo Statue, and one of the Gedo Statue’s nine eyes opened. The host would die due to the removal of their tailed beast. There is a numerical order, to seal tailed beast with the “Nine Tails” needed be sealed last, or the Gedo Statue would shatter.

However, with Nagato now dead, Tobi (Obito) claimed that they would need a new pawn to synchronise with the Gedo Statue in order to seal the Eight Tails and the Nine Tails. Though Nagato intended to use it for peace in the form of a weapon of mass destruction to keep government’s in line, the technique was created for Uchiha Madara’s Eye of the Moon Plan, as Obito (Tobi) was tasked with ensuring that the Gedo Statue of the Outer Path and the tailed beasts would become the Ten Tails once more.