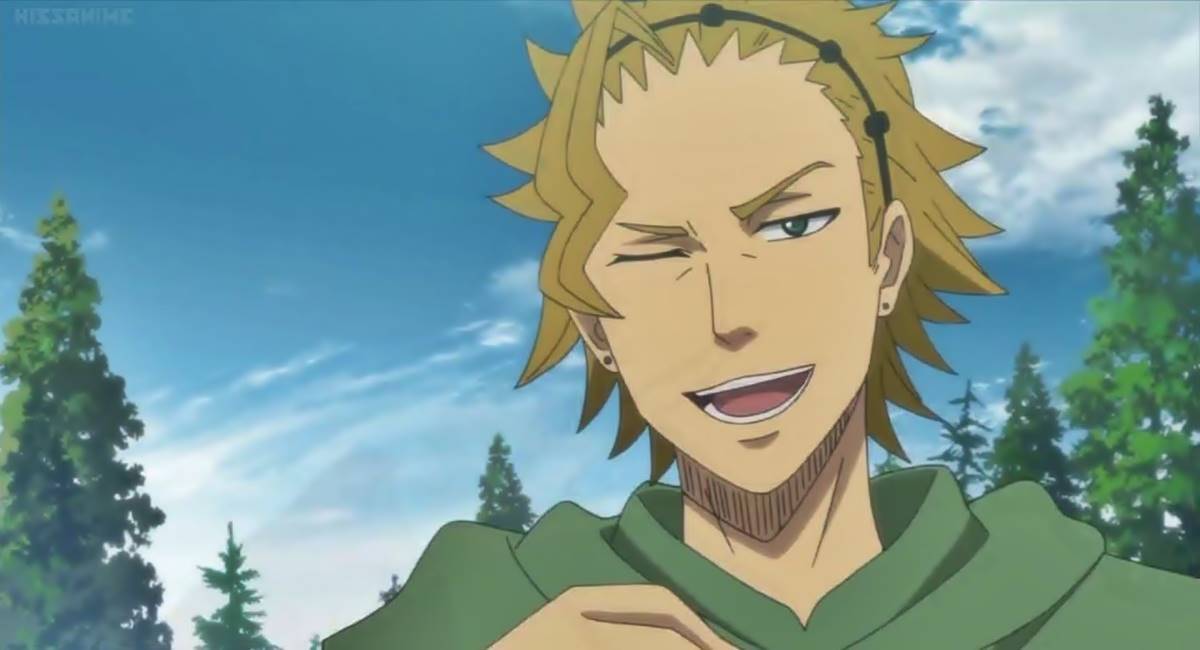 Sekke Bronzazza is a young womaniser who joined the Magic Knights Entrance Exam for the possibility to join a high-ranking Magic Knight Squad, manipulating Asta, the weakest participant, to make himself appear good. Sekke, on the other hand, lost the fighting test to Asta and was only able to join the Green Praying Mantises after bearing a grudge against Asta, who alludes to him with his “Bah-ha” laugh. He creates and manipulates bronze in a variety of ways using Bronze Magic. He became King Augustus’ personal companion after “saving” him from a possessed Coral Peacock magic knight, much to his chagrin, as he was only fleeing the mayhem the demon had wrought in the realm. Let’s see some facts about Sekke Bronzazza.

The King of Bah-ha is unquestionably the poorest character in the entire story of Black Clover. When we first encounter him, he’s bragging about his powers while fighting Asta, assuming that because of his royal status, he can beat any commoner. He’s immediately defeated in a single strike and forgotten about,

at least until we see him subsequently recruited to the Green Mantis Squad… as Jack the Ripper’s gofer. Sekke’s every appearance includes him fleeing from battle or hiding behind someone else who is doing the effort. His strange chuckle (Bah-ha!) and inflated ego should make him obnoxious, but his ineptness makes him endearing.

9. Teenager with a lean build

Sekke is a lanky adolescent with blond hair that is cut to a medium length. His hair is combed back and secured with a black hairband, leaving barely a few strands in front of his brow. Sekke wears a grey shirt underneath a dark grey vest with a large V-shaped neck. He also wears white slacks and black high boots with brown belts. Sekke also has a tan belt with a pouch on which he keeps his grimoire. Sekke Bronzazza is a Junior Magic Knight of the Green Mantis squad of the Clover Kingdom.

The satchel is slung over his left shoulder. Sekke is dressed in a magenta coat with long sleeves and black horizontal stripes around the forearms to cap it all off. Sekke is wearing the Magic Knight squad’s trademark robe as a member of the squad. It’s made of plain cotton and has a hood, however it only covers his body. In the centre of his chest, it is held together. On his left side, he wears the squad’s symbol.

Sekke is a shrewd individual who will do anything to maximise his chances of getting what he wants. This side of him was revealed when he purposefully stayed near Asta during the Magic Knights Entrance Exam

so that the captains might compare his abilities entirely to Asta’s poor performance. He is also a pompous individual who enjoys insulting individuals he considers to be beneath him or fabricating lies to elevate himself when he is with someone he considers to be above him.

Sekke is also a womaniser, and he enjoys flirting with ladies he finds beautiful. His seduction methods mainly involve standing seductively and delivering them speeches that highlight his romantic side, or lying and embellishing his achievements. Sekke also has a penchant for saying “Fuhha!” at every opportunity.

Sekke enters the Magic Knights Entrance Exam at the age of 16 in the hopes of being admitted into a Magic Knights squad. He approaches Asta, whom he deems to be the worst contestant based on his performance in the first exam,

in order to boost his chances of selection. Sekke then sticks close to Asta throughout the exam, hoping that the captains judging the test will rate his abilities higher than Asta’s.

Sekke creates and manipulates bronze using this magical ability. Sekke utilises this type of magic to sculpt bronze items. He employs this type of magic to instill a curse into a bronze artifact he manufactured. Sekke has a grimoire in which he keeps his bronze-based magic spells. The grimoire’s covers are light-colored, with a huge T symbol on both sides and a dark-colored horizontal line in the middle. On the front cover, there is a three-leaf clover symbol.

During the Magic Knights admission exam, Sekke Bronzazza approaches Asta and begins to hover around him, assuming that by surrounding himself with examinees of lesser competence, he will be able to impress the captains. After seeing his efforts to raise the broom up in the air, he chose Asta to perform the part. As the exam progresses, Sekke excels at all of the required tasks, whereas Asta is unable to complete any of them.

Sekke enjoys being in a relaxing environment and petty gambling. Bronzazza, Sekke’s surname, is a reference to bronze, his magical attribute. “Sekke” could be derived from the Japanese word sekkei, which means “design or plan,”

and refers to his Creation Magic. In the first popularity survey, Sekke was voted #44 (tied with others), #20 in the second, #54 in the third, #35 in the fourth, and #41 in the fifth. Sekke is one of Snow Man’s favorite characters.

William Vangeance reveals that the final exam will be a combat test at the end of the exam. Sekke begs Asta to join him in the test right now. While Asta is pleased with Sekke’s decision, he soon reveals his actual intents and continues to criticise Asta while detailing his plan after getting accepted into a squad. Asta remains deafeningly silent, still reeling from the revelation of Sekke’s genuine motives.

As Sekke casts his spell, the battle begins. Following that, Sekke invites Asta to launch the initial attack, which Asta eagerly accepts. Asta sprints at an alarming rate at Sekke, summoning his sword and slicing through Sekke’s enchantment. Sekke is knocked out by Asta’s attack since he is unable to respond to the rapid attack. While Sekke is on the ground, Asta announces his plan to join the Magic Knights, which is in direct opposition to Sekke’s. Sekke, meanwhile, has already been defeated and is unable to hear or respond to Asta’s remarks.