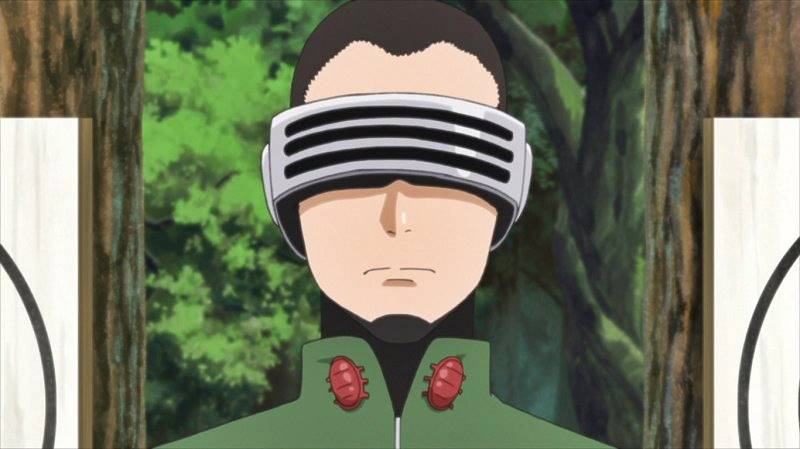 Shino Aburame: didn’t get nearly as much screen time as other characters in the Naruto franchise. In the manga, he didn’t make his appearance until the fourth volume. He did get to appear in the first episode of the anime, and viewers got to discover more about his family, thanks to the expanded back-story for the characters.

Shino developed over the course of the series as a member of Team 8, alongside Kiba Inuzuka and Hinata Hyuga, from someone with little patience and understanding for collaboration to someone who understood the significance of working together and waiting out unpleasant events. Look at the 10 most interesting facts about Shino Aburame of Naruto.

1. Shino is Calm and Composed

Shino has been a calm, composed, and isolated guy since childhood, and he is rather mysterious. He is depicted as being somewhere between stoic and matter-of-fact, rarely smiling or displaying any emotion; rather than thanking his teammates for congratulating him on his preliminaries victory, he told them that he expected them to do the same. He also has a habit of carrying grudges and being frightening, as evidenced by Naruto’s failure to recognize him at the beginning of Part II.

2. Shino can communicate with insects

Shino possesses a unique skill as a member of the Aburame clan in Konohagakure. His ability to converse with and train insects is often regarded as repulsive by his Shinobi Academy peers. Shino, on the other hand, considers it a regular part of life because it’s all he’s ever known. The Aburame clan actually injects a certain insect into the bodies of their neonates so that their symbiotic relationship can begin right away. Shino began to experiment with other bugs as he grew older, but his original training began the moment he was born.

Hayate was the Chunin Exam’s announcer, and he was deserving of the distinction. He could move at such a fast rate and with shadow clones that there were dozens of after pictures of himself. However, considering Shino’s ability to avoid blades and make substitutes as needed,

these direct melee methods are unlikely to be successful. Furthermore, Hayate would only get one shot at them before being entirely overwhelmed by the insects, draining his chakra and leaving him a defenseless target for Shino to finish out.

4. He is also very brave

Shino is also brave, as he and his comrades were horrified when they saw Gaara’s abilities during the second stage of the chunin Exams, but he still decided to assist Sasuke with Gaara in any way he could. He also expressed apologies for being unavailable and thus unable to assist in the retrieval of Sasuke. He resolved to work on his teamwork skills with Kiba and Hinata from then on. Shino even assisted Hinata in honing her skills, and is one of the few people, aside from Naruto, who openly expresses faith in her.

5. He attempted for Chunin tests

Shino and his Academy classmates were ambushed while they attempted the Chunin Tests for the first time, and the exams were never completed. Shikamaru Nara was the only genin in their community to be promoted to chunin. During a significant time jump, this altered. A two-year time leap occurred between the Naruto and Naruto Shippuden series, during which Naruto studied with Jiraiya and traveled. Shino and his companions took part in the second round of Chunin Exams. These were also disrupte, but this time it was due to a sandstorm that occurre while the team was moving across the desert. Lady Tsunade had already made the decision to elevate all of the genin from Konoha to chunin.

Shino, who is more concerned with science and rationality, is unlikely to believe in astrology. If he did, his birth date of January 23 would make him an Aquarius. Aquarius is a rebellious sign that is concerned with societal reform. That doesn’t sound like Shino, although he fits a lot of the other popular personality traits. Aquarius is generally associate with eccentricity, aloofness, and nonconformity. Shino seems to blend in, despite the fact that even his teammates are unfamiliar with him and his fondness for insects distinguishes him from his classmates.

He is reasonably certain of his talents and that he will win a conflict, and he will strive to communicate this to an opponent for the sake of their own safety. Shino, on the other hand, enjoys fighting and dislikes being denied the opportunity to do so, as seen by his going out of his way during the Konoha Crush to face Kankuro after the latter had forfeited to keep his puppets’ secrets hidden.

8. He has the same style as his clan

Shino is frequently seen wearing dark round sunglasses and a sea-green jacket with a high, upturned collar, similar to the rest of his clan. He wore a similar costume to the one he does now in Part II when he was in the Academy, although his jacket was a light grey color. Shino is the tallest member of his graduating class and has light skin. He has long, bushy brown hair and dark, piercing eyes, both of which are only visible in the anime. Shino, like the rest of his clan, keeps his eyes hidden from strangers because even his teammate has no idea what his true appearance is.

9. He has featured in four Naruto movies

Shino, unlike some of the other members of Naruto’s age, isn’t as well-known in the cinema. Only four of them feature him. Shino essentially had a cameo in Naruto Shippuden The Movie: Bonds, however, it was a powerful one. He was able to destroy an entire base by himself, thanks to his insects. Similarly, his appearance in The Last: Naruto The Movie was brief. At first, he looked to be having dinner with Kiba, and then later as part of a study mission. Fans got a glimpse of an alternate version of him in Road To Ninja, one who didn’t even like insects.

Before the Boruto series began, Shino had completed 44 missions. There were 17 D-Rank missions, 17 C-Rank missions, 9 B-Rank missions, and a single A-Rank mission (the most challenging). Shino was never officially assigne to a task for the S-Rank of elite shinobi. Of course, this number excludes missions he took part in during the anime’s filler episodes, such as the search for the bikochu beetle he actually led.