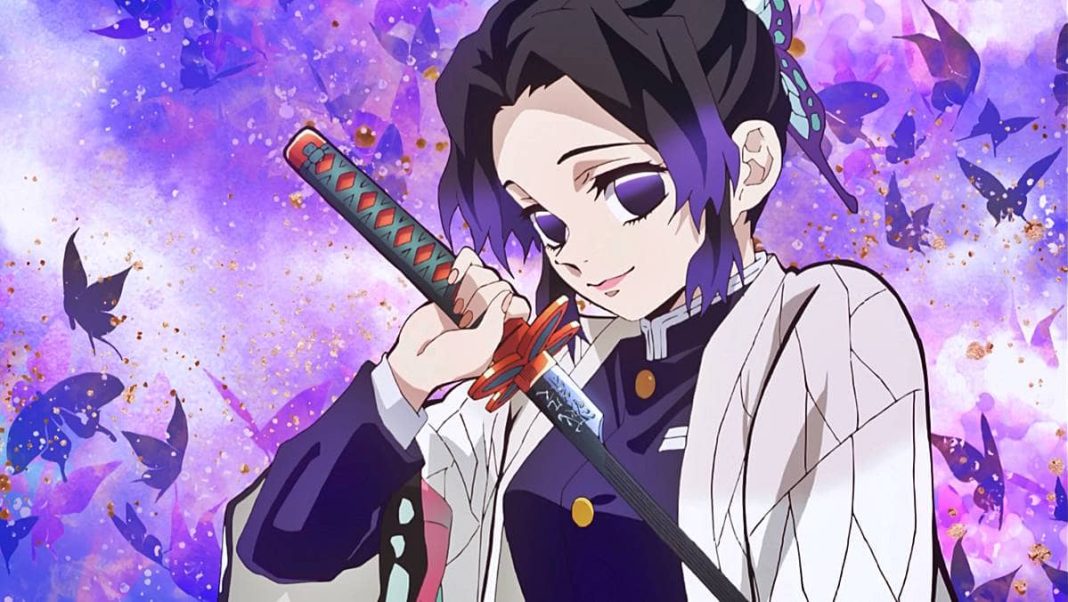 Shinobu Kocho: Hello friends. Hope you are doing well. This blog is about Shinobu kocho one of the supporting characters from the Anime Demon Slayer. She was one of the Hashira and practice Insect breathing as her technique of fighting demons. She joined the demon slayer corps when she was very young. He wished that there should be a world where demons and humans can live together without killing each other and became friends. She was very kind to everyone and always supported her fellow comrades in any situation. Her personality is different from others but here are some facts which might describe her.

Shinobu is a very beautiful woman with bright eyes purple in color. She has a very innocent look whenever anyone talks to her, they just fall in love with her. Shinobu is kind of small in her body type but very attractive. She sometimes appears frail which leads people to underestimate her. She wore a dark purple straight jacket and pants with a common demon slayer corps uniform. Shinobu has also a haori which bas a butterfly print that moves as she also moves. She has a sword and makes up using his all powers.

She is the calmest and friendly person we see in the anime series. She surprises anyone by suddenly showing on them and saying “Moshi moshi” in their ears, leaving another person in shock and a murmuring voice. Shinobu smiles every time but beneath it, she is a dangerous killer. She said that her smile is a reminder that she is also human after killing so many demons she almost forgot that she is a human too. She was a hot-headed person when her elder sister was there but after she was killed Shinobu was left alone.

Under her personality which she shows outside like a sweet and lovely beautiful person. She is a trained Fighter and kills demon-like any other hashira. Whenever a demon harms any human or her friends she goes into her killing mode brutally killing demons for killing humans and also bringing peace to humans. She has a straightforward personality and whatever the situation is she remains calm. Shinobu always says that demons and humans can be friends but when demons disagree with her she kills them with her sword and with a smile on her face. She enjoys punishing them.

Shinobu is a master of making friends. She says that whatever a situation is a person can be changed or demons can be changed also. Whenever she visited and fight any demon before killing them she asks them to leave the killing of humans and she will leave them alive. But still when demons don’t agree she slashes them without showing any mercy and beheads them in a second. She believes in that the prophecy that a demon was once a human who falsely became a demon and they should be given a second chance to live just like demons.

Shinobu was a hot-tempered girl from her childhood but her elder sister Kanae kocho was a Very calm and beautiful lady who always calm her in any situation when Shinobu became angry. She loved her elder sister and Shinobu also got her training from her. They helped everyone and they had a simple and peaceful life. But one day her sister was killed by demons and she was left alone without any help. When her sister was dying she said to Shinobu to always smile whatever the situation is. Following her sister’s wish Shinobu always keeps a smile on her face no matter what.

Apart from being a trained Fighter, she has also mastered the art of medication. She knows every treatment and whoever is injured by demons, treats them and makes them healthy again. She can create any medicine according to the injury caused by demons. Her medicine heals the poisoning of wounds and works as an antidote. When Zenitsu was affected by spider demon Poison her antidote cured him. Later when they were hospitalized she took care of them and helped them recover.

When she first met kanao tsuyuri, kanao was a small dirty, and very pale skin looing girl. She was starving to death and her parents sold her to a man. Shinobu and her sister rescued her and protected her from that evil man. Shinobu also kept her with herself and thus she can be very happy. After that, she also taught her how to fight against demons. She made her a professional Fighter and she came first in the demon slayer corps test.

She is one of the people who derived her own style of fighting or breathing technique known as insect breathing. Shinobu cultivated her own style watching how Insects sting and poison others. She just like an insect stings demons and makes them don’t watch. Her sword is itself shaped like a needle pointed at the ends which helps her sting just like a bee or insect. She has four forms given on the name of insect dances. The insect breathing is a very different one which is quite efficient and works very well.

As one of hashira she has to be a master swordsman. She is one the strongest Hashira and too a woman. She doesn’t cut the heads of demons instead she injects demons with deadly poison using the needle end which is dipped in poison. Shinobu is very agile. Demons always underestimate her because she is a woman. But she makes them regret it. She just moves like a butterfly and makes herself flowless against the attack of demons. Her speed also helps her in attacking demons. As she might be the fastest hashira as seen in various fights one of them against the lady of the spider clan and later against the fight with doma.

A. She is the first lady hashira to appear on the screen.

B. She has “evil demons” and “destroy ” written on the right and left sides of the swords respectively.

C.  She had a uniform just like Mitsurk opened from the front breast area but she disliked it and ordered to make a full buttoned demon slayer uniform.

D. The poison used by her on the needle tip can actually kill 700 people in just a blow.

E. She is very famous and thus stands out in every aspect of the series.

F. Her parents who weren’t mentioned said that they worked in a medicinal company saying which made her a talented person with medicine.