Something About Chinoike Clan (The Country Of Lightning)

For those who do not know The Chinoike Clan, the clan of the chino girl was a clan that lived in the country of lightning at the time of the beginning of the formation of the villages (obs: in fact, chino and much older than Sasuke). Standing out for his improved use of genjutsu through his dōjutsu. (For those who do not know the name of the new Donjutsu is Kerryugan and is at the level of the Sharingan and among the strongest of the Donjutsu eye powers). Shortly after the formation of the villages began, the Chinoike clan was recognized by their blood-red eyes, and it was said that the moment they were captured by their pupils, it would no longer be possible to escape. At that time, it had been arranged for a girl member of the Chinoike clan to marry the daimyō of Lightning Country, becoming his second wife but the official wife became jealous. Shortly after the girl became his second wife the daimyō fell ill and died. Then the official wife apparently put all the blame on the second wife, saying that the Chinoike clan had cheated the daimyō and then they had killed him. However, it was all a lie, but the people close to her and who knew the unique genetic make-up of the Chinoike clan resolved to regard the official wife’s words as true. As a result, the official wife hired the Uchiha clan to chase after the Chinoike clan, leading them to insulation in the Hell Valley (Sasuke Shiden episode of Hell Valley), located in the Land of the Hot Springs. After being exiled in the Valley of Hell, the Chinoike clan had its presence erased from the shinobi world and many considered that all members of the clan had been annihilated. However, the clan was able to survive under precarious conditions for many years. Finally, it was found that, although they survived for a long time, virtually all members of the clan ended up dying in the Valley, only two members were left alive who were no longer in the Valley of Hell. (The member who are still alive are: Chino and Oyashiro en) Oyashiro en and the guy that Sasuke is chasing in the ep and having no idea who the guy is, when I discovered Sasuke’s whereabouts tried to kill him. 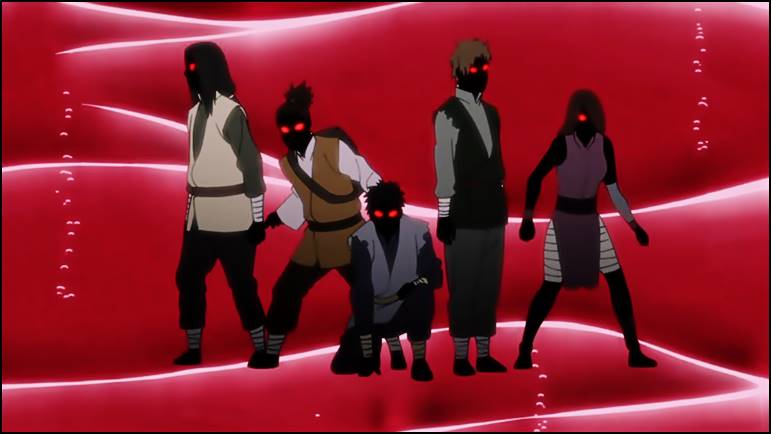 Kerryūgan came to be very much recognized for the power it provided, even to the point of being even compared to the Three Great Eye Techniques. (Compared with Sharingan, Rinnegan, Byakugan) In addition to their ocular power, members of the Chinoike clan also had the ability to manipulate various techniques using blood, making special use of iron in the blood, allowing them to create shapes such as that of a Dragon and fighting Taijutsu lethal blows.