Something About “Hinoko” And Her Jutsu “Chakra Needle”

Hinoko is a Konohagakure Anbu who strongly prefers her codename Soku.When she was younger as a student at Academy, She invented her own signature technique “Chakra Needle”. Because of such an accomplishment, Hinoko was scouted by the Anbu and the, upon her graduation exam, was immediately recruited as a the member.Hinoko height is about up to Shikamaru shoulders. While on the duty, she wear’s a Anbu cat mask and the standard Konoha jacket. Hinoko is a very skilled kunoichi and supported by the fact that Hinoko was scouted by the Anbu while she was still an the Academy student, implying that Hinoko is very skilled for her age. Hinoko created a technique that allow’s her to fire the chakra needle’s from her fingertips, that had a variety of effects including the paralysis, death and even the energising the target.
When Shikamaru Nara was tasked with infiltrating the Land of Silence with the dual purpose of finding missing shinobi from konoha, including Sai, and assassinating country head Gengo, the Sixth Hokage, Kakashi assigned Hinoko and Ro to aid him. After showing off her abilitie’s, Hinoko and the rest of the group departed at dawn at the hidden back entrance to Konoha. During the mission, She makes it clear to the Shikamaru she doesn’t like being called by her real name.
When Hinoko and the rest are brought before Gengo, he nearly succeeds in the placing her and the rest in his mind altering genjutsu until the timely arrival of the Temari and her Suna and the Konoha reinforcements breaks Gengo hold on them. She engages the brainwashed shinobi by restraining them despite the injuries Hinoko received from torture. After the Shikamaru defeats Gengo, having gained a concept of his dangerous genjutsu, Hinoko uses her Chakra Needle to paralyse Gengo’s tongue enabling from ever speaking a word again. With the mission accomplished, she prepares to escort the Shikamaru back to Konoha with the rest of Konoha personnel. Before leaving, She breaks from her tough exterior and gushes loudly when the Shikamaru approaches Temari for the romantic reasons. 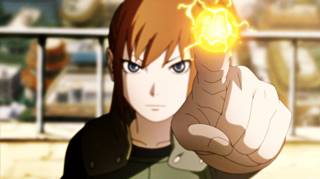 Hinoko shoots a chakra needle from her fingertip’s, that will alway’s hit the target. She can alter the properties of the needle to have different effects on the target once they are hit, such as by the paralysing, revitalising or killing them.