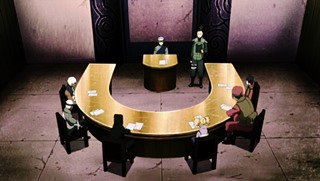 Shikamaru Nara and another shinobi handle documents for 6 Hokage “Kakashi”. Kakashi tells them Shikamaru should take a break sometimes. During a break, Shikamaru look’s at the clouds, and the other shinobi asks if Shikamaru gets bored with a desk job. The other one tells him he sounds like an old man sometimes. At the end of the day, Shikamaru and Kakashi discuss how things have changed during the peace times, and how Shikamaru is doing a desk job so he can help Naruto become Hokage in the future. Kakashi invites Shikamaru to eat, but Shikamaru has a game scheduled with Onoki. At the game, Shikamaru beat’s him. Later that night, Shikamaru train’s. During the day, Shikamaru performs his duties as Kakashi’s aide. Shikamaru arrives late for the barbecue with Ino and Choji, where they discuss what they’ve been up to. Shikamaru says he has to leave for Shinobi Union business. On a “Shinobi Union” meeting, Shikamaru is asked about the drop in mission requests but says it’s still being investigated. Later, Temari tries getting more information out of him, but evades her questions, she slaps him. Shikamaru informs Kakashi Temari is growing suspicious of him, and that their independent investigation on the Land of Silence could lead to Shinobi Union intervention due to rogue and missing shinobi potentially undertaking illegal missions there. They finally receive word from Sai, who left to infiltrate the Land of Silence. Sai’s report gets them worried, and Shikamaru requests two Anbu to accompany him to the Land of Silence. Shikamaru is introduced to Rō and Hinoko, who were selected based on Shikamaru’s mention of preferred abilities. Shikamaru visit’s his father’s and Asuma’s graves. At Asuma’s grave, he is met by Kurenai, Mirai, and her babysitter. Early in the morning, Shikamaru runs into Naruto, who’s on his way to Ichiraku for the breakfast. Shikamaru meets up with Ro and Hinoko by Konoha’s gate, ready to leave for the Land of Silence.