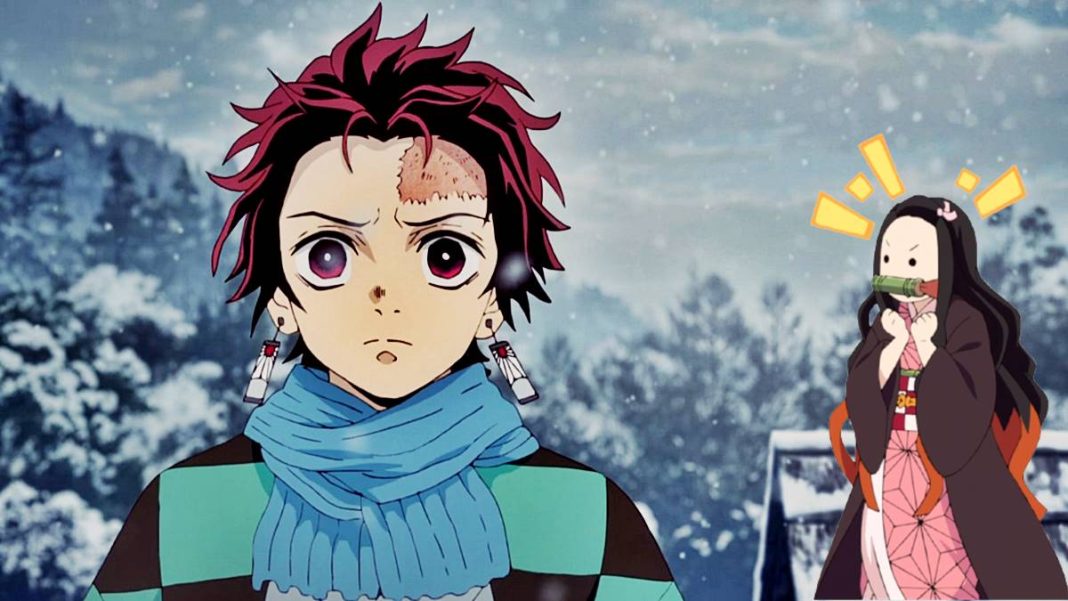 Tanjiro: Today we will talk about Tanjiro Kamado from Demon Slayer.  He is the main character from the Series Demon slayer( Kimetsu no yaiba). Tanjiro has names the ” Kenji” for charcoal or to heal”. The second name which refers to as the exorcist of Demons He is a male character who made his debut in chapter 1 in both manga and anime.

He is an average look person. His age is 17 years old. He is muscular-looking and fairly skinned. He has black color hairs with burgundy tips Tanjiro also has black eyes Tanjiro has a scar on his forehead His hands are very rough Which shows that he trained for it very hard Tanjiro wears a chequered black sea green haori over white pants and black pants Tanjiro has a turquoise scarf and white looped around his calves. Tanjiro wears Hana Fuda earrings. He also has a small ponytail.

Tanjiro is a simple person. He lived with his family members with a single mother and brother and sisters. Nezuko was the eldest sister. Tanjiro made his daily earnings by selling coals in the village. He is the only one who worked for earnings in his family. His father was already dead. He was very happy with the family. One day after selling his coals, he was returning home and saw his family has been killed and Nezuko has been turned into a Demon.

Tanjiro was shattered by these things He was so confused and sad. Nezuko tried to kill him but Giyu saved him from her. He was angry and wanted to know who did this to his family He then started a journey to find the real killer. Tanjiro faces many difficulties in this approach He find it difficult to find the real killer and later he joined The demon slayer corps.

He was sent to the Demon slayer corps and finds it amusing to be a part of it there He met the Hashiras in there Tanjiro was there to find the killer of his family with their help He then was required to give them a testimony that the Nezuko is a harmless Demon and won’t be doing this thing. Everyone was pleased to see the love of brother and sister as she was turned into a still he loves his brother.

He is very kind and gentle. Tanjiro has an unbreakable determined mind and sheer power to achieve anything He protected his friend and special his younger sister But sometimes he becomes angered by the behavior of Zenitsu and Inosuke and thrashes them He is hiding vengeance inside with this face He wants to kill Muzan Tanjiro emphasized even with demons that why he hesitated in killing them He is gaining experience and becomes a more powerful and good fighter.

he got some really helpful abilities

A. Nichirin red blades.- This blade is most powerful in this demon slayer world Tanjiro unlocked this ability when Nezuko lit his blade with her demon art. His sword turns red when he really wants to kill anyone.

B. Foreseeing- He can calculate the actions of the enemies by analyzing their blood flow and move Thus he increased his ability to speed up and do things faster. He is not an expert in this but still, he is good.

He also learned amazing skills in his journey.

A. Enhances Accuracy- He has good aim and precision as seen in the fight with Giyu and akaza.

B. Great smell- he has a supernatural ability to smell anything. He got it from his father I think. Tanjiro can sense any scent of anyone.  He has extrasensory perception.

C. Enhanced strength- when he was training he also gained superhuman strength by Jumping and practice things. He broke Inosuke’s ribs and later helped them in this state. Ha has Genius intellectual.

D. Speed and reflection- He has superhuman strength and reaction time. He can turn faster and uses the total concentration technique to control it.

He was a sword artist from the start. His master Sakonji Urokodaki helped him in this He has more skill than his fellow hashira members. He showed it when fighting one of the twelve moons Tanjiro can easily match the performance of hashira Tanjiro is easily in way of Muzan and went head with him.

He uses water Breathing as his technique Sakonjj taught this technique to him He also has the abilities of fire breathing style of his father He easily defeated two moons with it named Enmu and Rui.

Names of his twelves technique.

As a demon slayer, he also has Katana or a sword made up of nichirin, deep black in color Sometimes his swords turn red in with help of nezuko demon art and demon slayer mark He has black rings and ‘ metsu”, written on it Which means Destroy His helt is called by Rengoku swords match. He uses his swords like a master.

B. He can’t lie and always cant keep his head straight.

C.  His blade appearance changes he is the only character to do this.

D. He can understand what birds are saying. He is tone-deaf.

E. He is a tragic hero followed by the deaths of many of his members.

F. He has always deamt about battle and training. He always thinks about his past and what things go wrong.