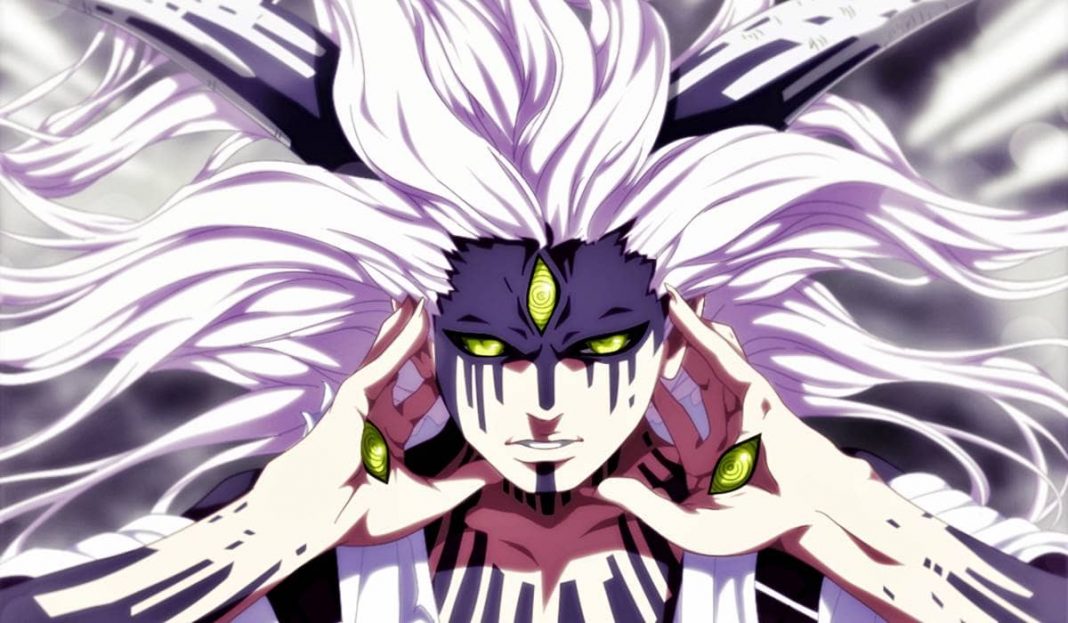 Momoshiki Ōtsutsuki is a central villain in Boruto: Naruto the Movie. He arrived in the Naruto world to obtain the chakra. Chakra is from Nine-Tailed Demon Fox. Being a member of Ōtsutsuki, he went out to see Kaguya along with her God Tree. And then planned to build up a new one. He wants to build it from the chakra of the Seventh Hokage. He already know that he will be killed by Boruto Uzumaki so he placed a kama on him. So that his spirit will be available through the mark.

Through engulfing Kinshiki, Momoshiki’s powers all get increase into a high volume. With this he defeated many. With so much of ease he defeated Gaara, Darui, Chojuro and Kurotsuchi.With his bare hands he was able to assert against Naruto using his Six Paths Sage Mode.

Earth, water, wind, lightning, and fire all are controllable in Momoshiki’s hand. He can control any type of attack. For example, firebird. Even when it comes to large tailed beast balls he can destroy them. These balls have the power to make vanish vast areas by fire. He had engulfed Kinshiki. So his power and chakra powers increased. He controlled many strongest creatures like molten lava golem. He has the power to bury down Kage.

Momoshiki has a very different look. He had a curved horn. Eyebrows are very short and this indicates nobility. Hair is like a long ponytail looking like a curved pattern. Skin and hair are pale.

The Otsutsuki clan members had a lot of Chakra. Even Momoshiki also had. He is as dangerous as Kaguya. Once he had kicked off Naruto. He rumbled through the Chuunin Exam building. This showcases how powerful he was. He can also fly and have all the rights on Chakra. He can also take out chakra. So that his victims can get lost their energy. This he had done to Killer Bee and Naruto.

Momoshiki is not a person who likes hardworking. He likes to use others powers and abilities, instead of using his own. So he continued this and now he won’t have the skill in taijutsu. This became his weakness.

7)Angry and not well informed

He also got very angry sometimes He got tempered when things don’t go well. Once Boruto torn his dress, he got very angry. He was very angry in the fighting fields. Momoshiki had done nothing to keep the chakra. He blindly believed that his superpowers sustained him. Momoshiki thought he can rejuvenate Chakra from the fruits he got. He thinks he can also recharge its samples getting by attacking others.

Momoshiki is a very cool person. He will manipulate and calculate before doing anything. He is also a sadist. The audience understands this while seeing the fight between him and Kinshiki on Konohagakure. There he harmed some poor human beings by firing them. Then he laughed by seeing it. He used to call human beings “lowly beings”. This showcased how much superiority complex he held of people. He thinks that humans are just mere people.

He got a golden chance to obtain jutsu or chakra at the rinnegan, but he can’t. This was when Boruto, Naruto, and Sasuke throw kunai knives. They throw knives into the palm of his hand. But unfortunately, he got caught by the Rasengan of Buroto and he died off. They make powerless his rinnegan.