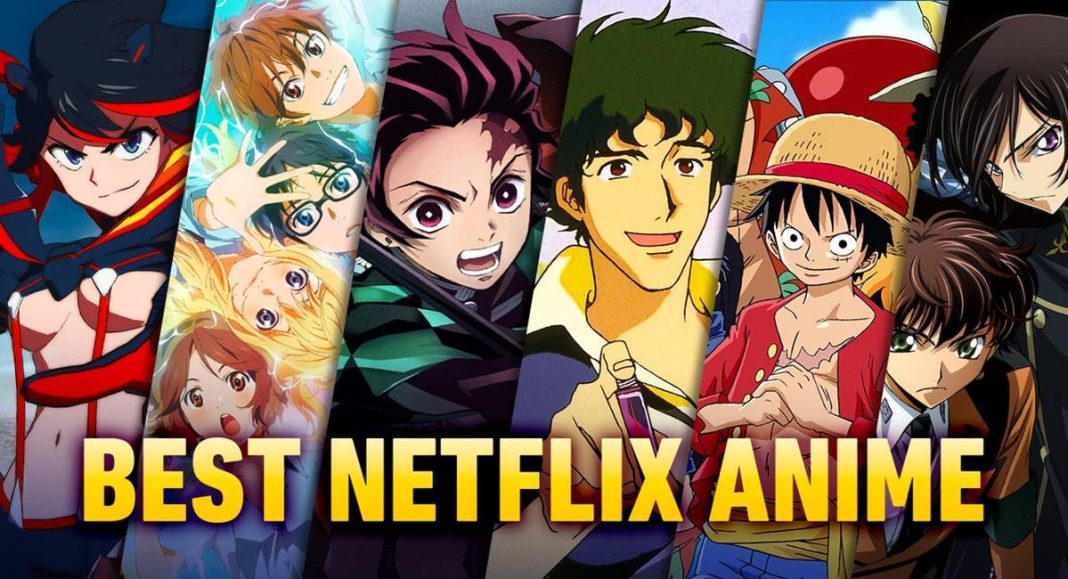 The best anime on Netflix (August 2022): In addition to fresh slice-of-life series like Uncle From Another World and venerable oldies like Ouran High School Host Club, Netflix is already producing its fall anime program for 2022. Despite the fact that slice-of-life anime is also a fantastic starting point into the medium,

many individuals first discover anime through the shonen genre. Anyone interested in slice-of-life anime, whether they are a novice viewer or a seasoned fan, will find plenty to enjoy on Netflix. With several exciting new series that haven’t even finished their first seasons, the streaming service has a particularly strong roster in August.

The survivors of humanity in a post-apocalyptic future reside in a technologically advanced city-state that is labyrinthine and under constant threat from the Safeguard, ornate robots that resemble spiders. Killy, a warrior dressed in all black from “below,” saves a young girl named Zuru from the Safeguard

in the 2017 anime action movie “Blame!” and provides salvation to humanity. Zuru’s community is in danger, so Killy partners up with him and Cibo, a cyborg from before the techno-apocalypse, in an effort to preserve it. They are looking for a human with the Net Terminal Gene, which can operate the robots. Blame! merits the exclamation point in its title thanks to its conceptually complex and action-packed plot.

In this post-apocalyptic retelling of “The Little Mermaid,” “Attack on Titan” filmmaker Tetsuro Araki imagines a changed Tokyo. Strange gravitational anomalies were sparked five years ago by the appearance of unknown sky bubbles. Now that Tokyo is completely engulfed in a huge bubble, the youngsters

who are still alive are engaged in perilous parkour activities to compete for resources. Young Blue Blazes player Hibiki is accidentally thrown into the ocean during one of the team’s games, and a strange female by the name of Uta appears out of bubbles to save him. Uta’s identity is unknown. Her origins are unknown. What misplaced connection to Hibiki’s past does she share? Both the storyline and the animation in “Bubble” are expertly done, delving into these issues.

in which a female heroine has more than two prospective love suitors for a significant portion of the narrative. But Haruhi and Tamaki, one of the best slice-of-life couples out there, is a main relationship that is repeatedly alluded to throughout the anime.

The protagonist of Kotaro Lives Alone is a young child who moved into an apartment building by himself. He encounters Karino, a struggling manga artist who takes care of the youngster, while on his quest. Kotaro Lives Alone isn’t necessarily the most cheery anime out there,

despite being one of the best comedies of the 2020s already. Although Karino steals the show, it is heartwarming to see how committed the entire apartment building is to nurturing the odd kindergartener. One can laugh or cry a lot while watching Kotaro Lives Alone.

The Promised Neverland just needed one episode to captivate the whole anime community, and in just one short season, it rose to the top among 2019’s new releases. Three of Grace Field House’s most intelligent orphans discover a terrifying dark secret

when they break the law and leave the property. They need to find out a way to leave their ostensibly beautiful home since their lives and the lives of the other orphans are in jeopardy.

Since its arrival to Netflix’s catalog in 2017, One Punch Man has been a regular, and throughout the past five years, it has ranked among the most-binged and frequently-rewatched shows on the service. Saitama makes a commitment to become a superhero after saving a child’s life. The result of Saitama’s extensive training is that he defeats all of his foes with a single punch,

losing all of his hair in the process and being unable to find a challenge. He finally consents to join the Hero Association after taking on the cyborg Genos as his student.

despite the absence of subsequent seasons. This is likely due to the loyal fan base. A great number of people, including Eren Jaeger’s mother, are devoured by the terrible titans as wall Maria collapses. Eren wants to unite the Survey Corps and discover a way to permanently exterminate the titans because he has vowed retribution against the monsters.

Undoubtedly one of the saddest anime stories, just because the animation hasn’t been finished. The anime has been on television for years, yet viewers still hold out hope that it will end one day. Gon Freecss, who hopes to follow in his father’s footsteps and become a legendary hunter,

is the son of a well-known hunter. Gon Freecss has all the skills necessary to become the best hunter in the world and locate his missing father thanks to his limitless talent, potential, and amazing companions.

Seven Deadly Sins was among the first anime that Netflix licenced exclusively and it continues to be one of the most watched and adored anime in the Netflix collection. The Holy Knights serve as the country’s primary guardians in the kingdom of Britannia. However, when a select group of knights known as the Seven Deadly Sins is accused

of killing the Chief Holy Knight Zaratas, it forces them into hiding. The princess of Britannia, Elizabeth, embarks on a quest to track down the Seven Deadly Sins in order to save her realm as a new threat materializes.

Death Note, anime’s edgier cousin in the middle of the 2000s, helped devoted anime fans mature to a degree that other series at the time couldn’t. Your bucket list should include Death Note because it’s practically a requirement for any anime lover. After acquiring a Death Note, a notebook with the power to kill anyone

whose name is inscribed inside, Light Yagami, a student at a highly competitive high school, starts ridding the world of its criminals. L, who is as intelligent as Light and realizes that Japan is the source of the deaths, sets off a perilous game of cat and mouse with Light.