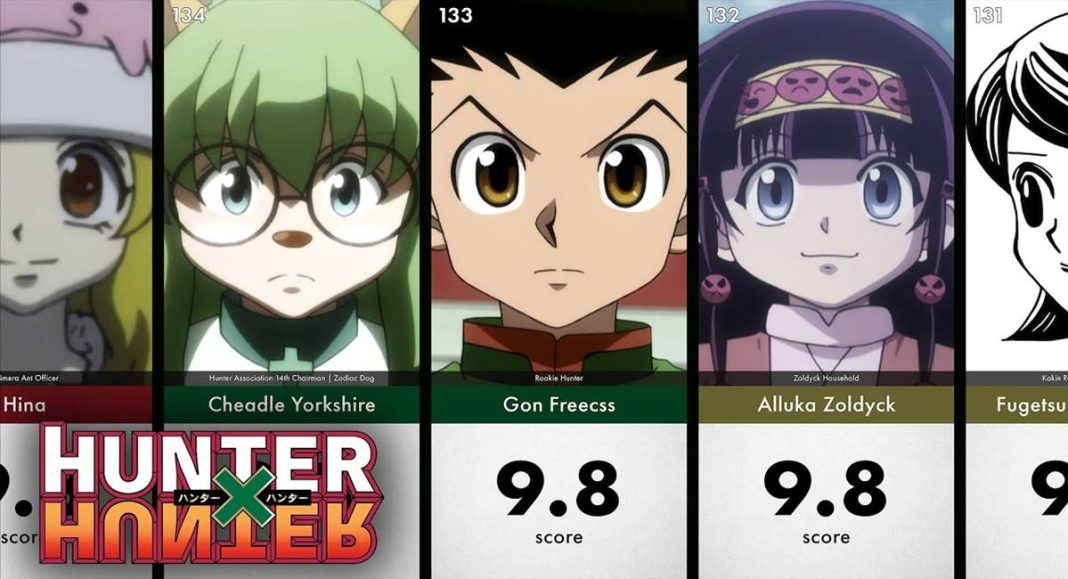 The Best Hunter x Hunter Characters: Due to the fact that the protagonists in shows like Hunter x Hunter are prone to traveling around a lot and meeting new people, these shows frequently have tiny main casts with a large number of supporting characters. Some of these characters are more endearing than others,

and they sometimes manage to draw viewers’ attention in a way that even the main characters fail to do. It’s obvious which characters are the most popular when it comes to how fans feel about them based on how many fans have added them to their MyAnimeList favorites lists. Both those who unexpectedly failed to make the cut and those who are unexpectedly popular.

Feitan Pohtoh is a fan favorite, and that much is clear just by looking at him. He has the same minimum speech and smoldering, bored appearance as Sasuke, which Naruto fans will know. Feitan also looks great in all black and has dark hair. He is a thief who serves as the Phantom Troupe’s torturer and interrogator, and in this capacity, he exhibits overt sadistic tendencies, which makes him an intriguing character.

Pitou is another character whose appeal to fans is partially understandable. She is effectively a cat girl because Chimera Ant is a cat-humanoid, replete with ears, a tail, and a cat mouth that usually looks to be curled up into a smile. She also has a very feline-like personality,

readily becoming intrigued and sidetracked, and frequently abandoning her duty as a Royal Guard to go play.

Actually, the pick of Isaac Netero as a fan favorite character was quite unexpected. Being an old man, he should often be written off as a character. He looks considerably younger than his age, if not in his face and hair, then certainly in his body,

which is extremely strong and muscular. Isaac Netero is also quite animated and playful, and he enjoys playing practical jokes on his Hunters by giving them projects with improbable due dates. He also doesn’t exactly behave like a traditional elderly man.

Leorio Paradinight has the appearance of a character from a Shinichiro Watanabe anime crossed with a character from Lupin III, making him an excellent choice for a fan favourite. When first introduced to the audience, his appearance and behaviour reveal him to be an unlikable narcissist

who is preoccupied with power and money. But this appears to be an act since he also has a strong desire to help the underprivileged as a doctor and often acts as a big brother to others.

In terms of character design, Chrollo Lucilfer is one of Hunter x Hunter’s greatest; nonetheless, he actually seems more like a Jojo’s Bizarre Adventure villain. The Phantom Troupe, who otherwise have traits not exactly suitable for team development,

are led by him since he is a charismatic antagonist. Even though he is unquestionably evil, he is also incredibly fascinating. He has many ideas about the nature of humanity and the reasons why people, including himself, act in certain ways.

That there are so many villains among the top 10 characters chosen by fans is not particularly shocking. Very few villains are given the same personality qualities or methods of being bad, giving them a lot of leeway to experiment with theories about human nature. Meruem is a fantastic illustration of a villain that has drawn fans’ attention. This is due in part to his reputation as a brilliant antagonist and in part to the fact that he experiences a change of heart after befriending a young human girl.

Kurapika, a teenage hunter who is smart and composed under duress, is another character on this list with a past similar to Sasuke, a fan favourite character from another series. At the age of 12, he lost his family, and this has motivated him to seek retribution ever since. Due to this objective, he doesn’t get to know many people, but he does manage to form relationships with people where he cares about their happiness.

The fact that Gon Freecss, the protagonist of Hunter x Hunter, is among the top three most beloved characters is not surprising. Although it isn’t much of a surprise that he isn’t number one, this is to be expected given the fact

that protagonists are frequently less compelling than supporting characters. Gon is still a wonderful shonen hero because of his optimistic outlook, can-do attitude, desire for adventure, and will to grow stronger.

In this list, Hisoka Morow, a member of the Phantom Troupe, is the highest-ranking villain. He has the same appearance as Lucilfer, which suggests that he would fit in perfectly as a villain in Jojo’s Bizarre Adventure, and he also has the personality to do so. He enjoys engaging in combat, particularly when up against highly strong opponents. In most circumstances, he maintains his composure and coolness while focused on his love of war and his desire to watch others suffer for his entertainment.

One of the series’ main characters and Gon Freecss’ closest friend is Killua Zoldyck. He is a happy youngster who aspires to be a Hunter at the start of the series, and he is immensely endearing because he has a major sweet tooth. He’s also a little more complicated than Gon because, at times, he approaches combat with a ruthlessness

that one wouldn’t typically associate with someone his age. In fact, he does frequently appear murderous. His character path is unrivalled, and Gon’s positive impact aids in his ability to get past these emotions.

The Chimera Ant King’s most devoted guard by far was Shaiapouf, one of the royal guards. He has two sizable wings and antennae on his head due to his half-butterfly nature. He is an admirable thinker as a person, and you can frequently see him reading or practising the violin. In addition to his improved strength, he has the ability to fly, apparently at great speeds. He is a brilliant supporting character who uses Manipulation Nen and has the ability to immerse people with overwhelming Nen.