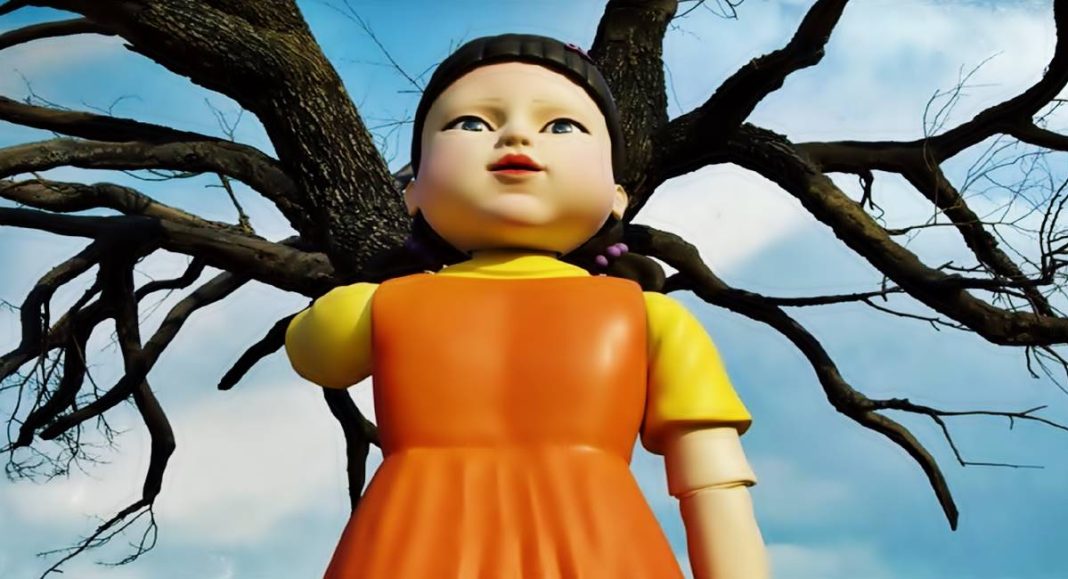 The Origin of Squid Game’s Creepy Doll: The cast of Squid Game, the latest gritty Netflix original series, has provided information regarding the giant killer doll’s Korean roots. The South Korean show is based on a life-or-death competition where one contestant out of 456 has the chance to win a prize worth 45.6 billion, but the consequences are fatal, and the showrunners aren’t afraid to show

the sadistic violence contestants face as punishment for losing easy children’s games. Since its debut, it has surpassed all other television programs in popularity in the United States and the United Kingdom. This has sparked a discussion and generated numerous memes online.

South Korean celebrities Lee Jung-Jae, Park Hae-soo, Jung Ho-Yeon, Kim Joo-ryoung, and O Yeong-su can be seen in Netflix’s Squid Game. It’s a dystopian nightmare that utilizes playground games to illustrate the extremes of human avarice and class differences. The games, “Red light, Green light,” is the most unforgettable moments. The game is more violent in this edition because a huge killer robot doll shoots anyone

who moves when the light “turns” red. In order to explore the show’s primary effects, the Squid Game cast appeared on The Tonight Show Starring Jimmy Fallon. Fallon also displayed his bobblehead doll to the audience. Ho-yeon interjected to clarify that the doll is a common representation of a student from South Korean textbooks. She had a male equivalent named Chulsoo, according to the actress, whose name was Younghee. You practically need to watch Squid Game twice to really appreciate all of its levels of symbolism,

Easter eggs, and foreshadowing. It serves to illustrate the innocent essence of the activities with a violent twist. The popular doll used in school texts is just that. Squid Game is a firmly South Korean interpretation with an even harsher and more graphic portrayal of economic unrest, despite comparisons to The Hunger Games, which the show has been compared to.

The internet provider SK Broadband of South Korea has even sued Netflix over Squid Game after the programme unintentionally “damaged” the internet. Squid Game has clean the world by storm. While there is probable for a second season, viewers will have to wait to see if the spooky doll appears on Squid Game in the future.

The origin story of the Creepy doll from the Red Light, Green Light game in Squid Game would terrify you if the doll itself did not already creep you out. A South Korean village’s real doll actually belongs to one, as recently discovered by internet users. You can, in fact, go see the doll.

In Chungcheongbuk-do, South Korea’s Jincheon County, the doll truly belonged to the village where horses were used for transportation. It takes two to three hours to move by bus or automobile to Jincheon County,

which is located not far from Seoul. The county is home to the Macha Land town and horse-drawn carriage museum. Right now, the doll is tall and standing by the door.

Following filming, the doll was delivered back to the community. Citizens claim that it was there prior to the filming of Squid Game. It was borrowed by the production crew briefly before being returned. The doll appears to be lacking a hand right now, which is unfortunate. When the concert was over, it had both, but when I got back, it was gone. Because it’s a beloved and well-known character from their school days,

the “Squid Game” doll has an added degree of spookiness for South Korean viewers. The actress Jung Ho-yeon, who portrays Sae-byeok on the show, discussed the history of the enduring character

in an interview with “The Tonight Show Starring Jimmy Fallon” (per The Hollywood Reporter). Korean viewers are forced to see an actual, cherished figure from their childhood murder characters by the hundred, while non-Korean viewers “just” see an alarming gigantic doll with a targeting mechanism that shoots down everyone who loses the Red Light, Green Light game. Ah, “Squid Game,” there’s always more existential terror to be layered on top.