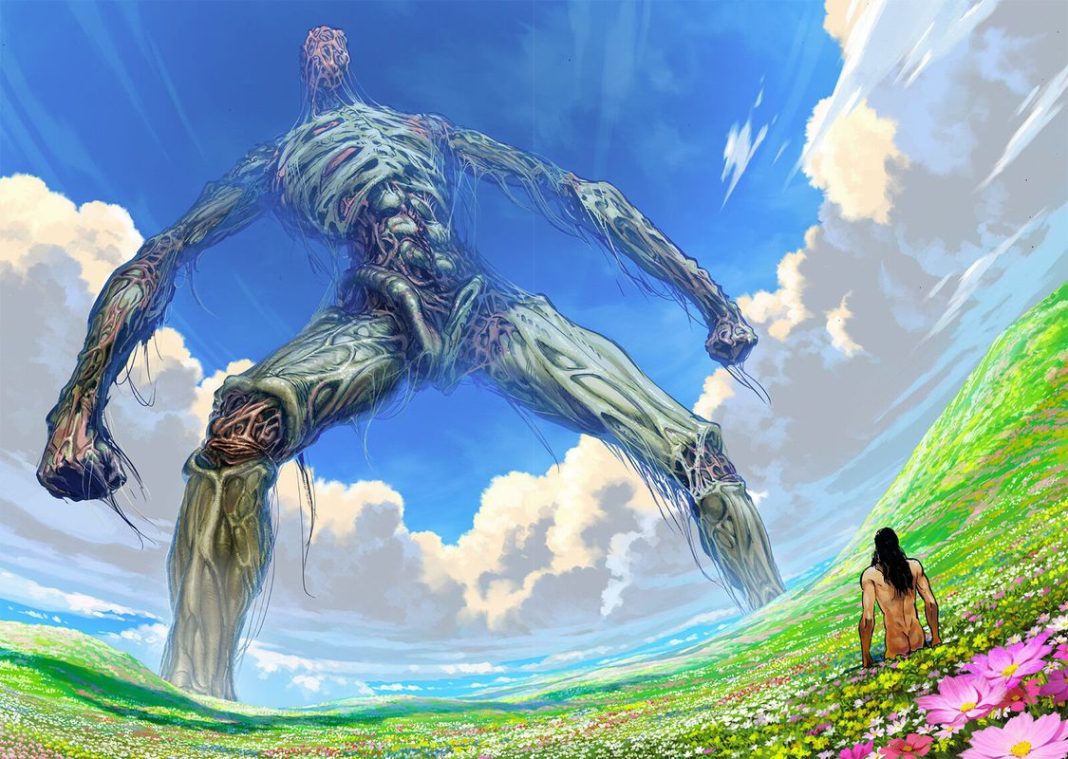 Since the release of ONE PUNCH-MAN manga chapter 167, a lot of questions have been asked and a lot of theories have surfaced. One of these questions has been “What was the huge spine-like structure we saw protruding from the crater on the moon in panel 8?” “Was it the spine of another ‘god’ or was it the same God we all know?

It wasn’t until a month ago or so that i began to correlate and corroborate info on the possible existence of multiple gods all thanks to a seasoned OPM fan and my bro Jonathan Sanchez, who first stipulated the theory of MORE THAN ONE GOD. Well, to answer all the questions, we’ll have to go back to the origin story. Please read on patiently.

WHO IS GOD & WHERE DID HE COME FROM?

On numerous occasions, God has been stated to possess immeasurably potent DIVINE POWER. It was most recently mentioned in manga chapters 166 & 167. But how exactly did he acquire this power? In chapter 115.5, Orochi explained to Saitama that in a desperate attempt to create the ultimate lifeform, Gyoro Gyoro carried out several tests and experiments on him. He was even offered several sacrifices to boost his growth and power. However, when these sacrifices proved to be insufficient, Orochi instinctively dug his way into the earth’s core only to discover a SHRINE hidden beneath. To his greatest surprise, depicted on the wall of the shrine was a large ancient painting of a creature that looked exactly like Orochi himself. Also shown on the painting were humans worshipping this creature and offering sacrifices of various kinds of animals to it. Even newborn babies weren’t spared.

Orochi further explained that at that moment, he knew he was destined to become a GOD. And so after that, he made effort into putting up a front for psychos while at the same time searching for a worthy opponent to sacrifice on his altar and finally become the GOD he was meant to be. At the end of that chapter, we see Orochi’s altar crumbling only to reveal a full-bodied painting of God himself..

What does this tell us in essence?

The God we saw on the painting actually started out like Orochi. We can therefore describe GOD as a MONSTROUS BEING created as an END PRODUCT of numerous SACRIFICES offered on a designated altar. In other words, God is the supreme manifestation of a monster. The highest point of MONSTER-FICATION.

To fully understand what MONSTER-FICATION really is, we’ll have to revisit both Gyoro Gyoro’s & Dr. Genus’ elaborations on the subject in Chapters 94 & 89 respectively. According to Gyoro Gyoro, MONSTER-FICATION is achieved when an individual “repeatedly overcomes death through extreme challenges to the body & mind.” This in turn triggers an EVOLUTION. Dr. Genus elucidates on this by stating that unlike Saitama who removed his limiter and achieved limitless power through extreme training and the intense desire to protect the weak, the EVOLUTION that comes via MONSTER-FICATION is founded on rage, hatred, cruelty, malice, and the powerful desire to dominate. Fuhrer Ugly, Garou & Orochi are prime examples.

Moving forward, we could therefore describe Orochi as a LARVA metamorphosis of a GOD who was yet to develop fully into maturity just as the mural in Chapter 115.5 depicted. But even as a LARVA, he still possessed considerable amounts of DIVINE POWER. In Manga chapter 132, we see Orochi’s remains taking over Psychos and granting her power so great that she was able to divide the ocean and nearly cut off the upper half of the earth. Later in that same chapter, it became clear to Psychos that the power she had received was of DIVINE origins. She even stated the appearance of God looked like Jupiter. Correlate and corroborate that with the info we already have and you’d see the dots connecting.

Moreover, In Chapter 156, Blast made a compelling statement in front of an opened portal that showed a gathering of heroes from other planets. He reassured King that he wasn’t FIGHTING ALONE. This means that the threat of God isn’t limited to earth alone. There are other gods wrecking havok all over the galaxy and universe.

The existence of a galactic league of heroes

The existence of a galactic league of heroes similar to the Green Lantern Corp further solidifies this assertion. According to Blast in Chapter 139, the strange heavy cube which has the ability to distort space and allow for communication with God is scattered all over. And since he’s been picking them up as a hobby, it’s safe to surmise that the presence of these cubes are indeed proof of the existence of other gods.

In conclusion, if Orochi had the potential to become a god, then there surely are others. The dormant god we saw squatting deep underneath the monster association hideout in chapter 138 is different from the god that stood on the moon and killed Homeless emperor in Chapter 153. Also, the spine-like structure we saw in chapter 167 resembles the spine of the dormant god we saw in chapter 138 which makes me to believe that there is another god squatting dormant in the moon. The active God also seems to be the one we saw in chapter 153. This god has been busy imparting or attempting to impart people with DIVINE power to carry out his sinister will. From Homeless Emperor in chapter 113 to Tatsumaki in Chapter 156 and now to Garou.

It is now clear that these Gods will be the fulfillment of late Shibabawa’s prophecy not Cosmic Garou. It’d be interesting to see what new info is revealed about God. I just hope we don’t have a situation similar to the MCU’s Celestials unfolding as time passes. Time will tell though.

What are your thoughts on the theory of MULTIPLE GODS? Do leave them in the comments box below.