HomeANIMEThis is 6 Scenes Make You Sad in Naruto Series!
ANIME

This is 6 Scenes Make You Sad in Naruto Series!

6 – Sasori the Puppet hug his parents 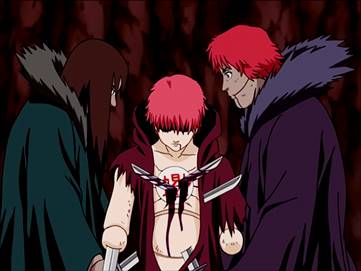 Sasori growing up without both parents. It was later revealed longing on the father and mother with two dolls made to resemble them. Both ‘kugutsu’ is often used Sasori around himself, and try to establish a sense of warmth of a hug that she had never felt. In episode Sakura and Granny Chiyo battle against Sasori, we will be made to cry with the scene of the death of a member of the Akatsuki. Sasori death for both dolls attacked his own parents. He died in the arms of both parents makes.

Anyone who watched the scene Naruto in this scene must have tears in her eyes. 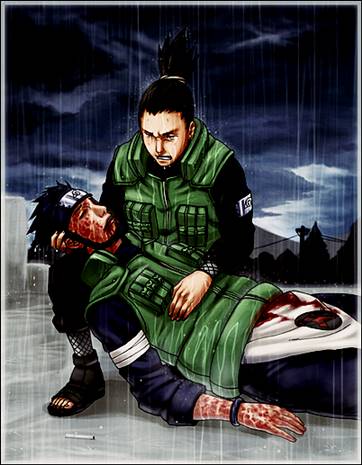 Death of a teacher who has taught many things to his third, Ino, Chouji, and Shikamaru, Naruto is a scene which has been draining a lot of tears from the audience. It can not be denied, ninja-themed anime fan this one would be carried away mourning over the death Asuma-sensei. Grief was shared by the students, especially when the child was pregnant Kurenai from Asuma. The woman had no idea that his son would be born without the presence of a father.

Sadness was enveloped one of the closest disciples with Asuma-sensei, namely Shikamaru. Pupils who have the nature of the idler still do not believe that the teacher will go fast. Moreover, was killed by an enemy who is a member of Akatsuki. Shikamaru feelings become unmanageable. She even lit a cigarette in honor of his beloved teacher. But since he was not a smoker, Shikamaru was choking. The young man continued to devise tactics to defeat Hidan and Kakuzu, two members of Akatsuki has killed Asuma.

Obito and Kakashi are close friends who are united by together ness through each mission. Their members are three: Rin, Obito and Kakashi. They were guarded by a teacher named Minato. Even so, less likely to Kakashi Obito who had indifferent nature. Moreover, far above the ability of Kakashi Obito, it makes Obito so envious. They both often fight one another. However, friends remain friends, will not decrease in value. Obito dying next to her body crushed by a large stone decided to give one of his eyes are still intact to Kakashi.

3 – Minato and Kushina testament to the Small Baby

Naruto is the son fruition the love of Minato and Kushina. Naruto is the main character in the story series Animanga the famous works of Masashi Kishimoto. Well, in one episode, narrated that Minato Kushina also been intestate at Naruto before he died. When they were both dying trying to hold back the raging Nine-Tailed Demon, they told a lot of things in baby boys their only child newborn. Kushina menitip many restrictions typical of mothers to small Naruto, while Minato just told me that the will something like what is presented Kushina. Then ended Nine-Tailed Demon was sealed, and they both disappeared.

Definitely the audience all baper by Naruto scenes on this one, right? Plus the fact that one day Naruto will meet with his mother and father.

Itachi is a Konoha ninja from the clan of the gifted. Many people recognize the strength to fight Itachi, including his own family. He always dielu-elukkan by his father, to often make Sasuke jealous. Sasuke is the only brother Itachi at once the most loved by him. Itachi always keep Sasuke, holding him up unique customs such as flicking a finger on Sasuke’s forehead. However, things started to be different when Itachi slaughtering member clan on one night, including his mother and father. Sasuke leaving only the big grudge to then get avenge.

Sasuke managed to grow into a strong young ninja. He has decided to go from Konoha and joined with Orochimaru to have much greater strength. It was done Sasuke solely to exact his revenge on Itachi who is now a member of the Akatsuki. With great vengeance, Sasuke finally able to meet with his brother. He fought until the end and can eventually kill Itachi. At the end of the breath Itachi, he spread his arms, then touched Sasuke’s forehead, the way he did in a little Sasuke.

This scene became so-blue, especially after knowing that Itachi has wise reasons behind the massacre clan has done.

Nothing is saddes than the death of Jiraiya. Teacher “womanizer” who is one of the three sannin it left a very deep impression. How come? He has taught many things on Naruto. The characters are typical of course will continue to stick in the minds of the fans. The scene where Jiraiya dying and sinking in the ocean has always been one of the scenes in the anime Naruto who makes us cry! Goodbye best teacher …