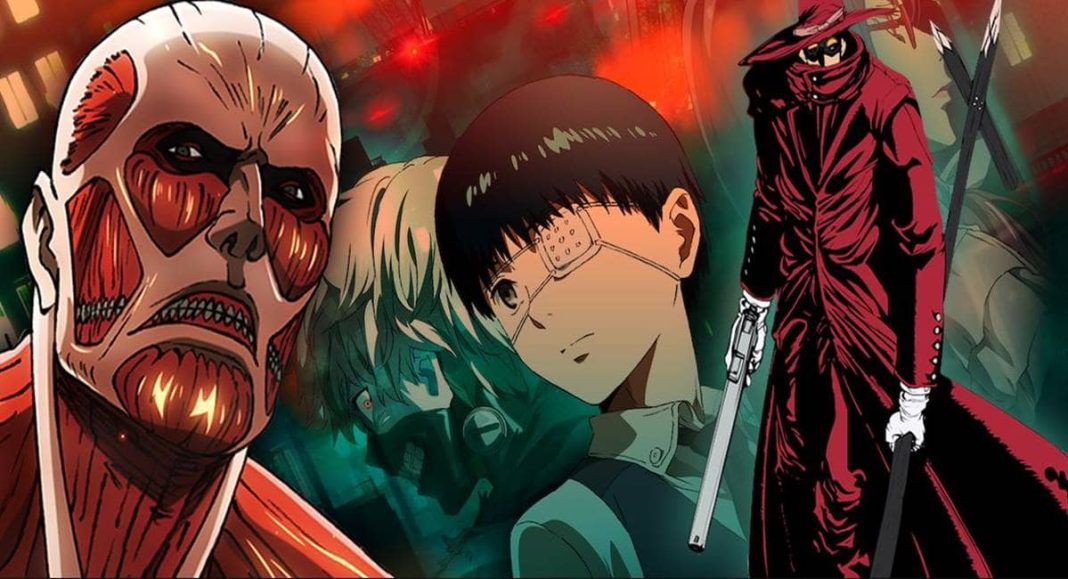 Anime Similar: We love watching Attack on Titan because of its story and everything but also we know that this is the final season of Attack on titan. Soon this will end and you will feel bored. But don’t worry I am here for you to tell you about 10 anime that is quite similar to Attack in Titan. The list here is made solely for the people who are into Action anime and like to watch people being killed by different species. So here is a list of ten shows who are similar to Attack on titan.

What will happen when you wake up someday and find your body is attached to an alien parasite which feeds on human flesh. This will be very hard to digest. The show features some of the moments which are still considered to be the best in anime history. Watch how the main hero of the show works together with monsters inside him to eliminate the bad monsters that are killing innocent people mercilessly.

The series is quite similar to the attack on titans. The series is set up in the times of medieval history where just like AOT people live on an island that is haunted by humanoids that can shapeshift themselves and they kill and feed on people around them. A group of, mysterious people come together who call themselves as an organization to kill the Yoma. The show features some powerful female warriors.

The show is quite good and suitable for people who like to watch humans fighting giant monsters wearing robotic armor. The story is set in a future world of Tokyo 3 where monsters named Angel who are quite big in size are killing humans for themselves. The main hero Shinji Ikari is sent to that place. He is equipped with large Evangelion Machines which are connected to the pilot nerve system. They are only weapons that can kill monsters and protect humanity from extinction.

This might be the only anime that is quite underrated in the real world. The show features the story of some scientists who are going to do an attempt to make the Mars planet suitable for living and colonization. The main goal of that scientist is to create modified algae and seed the planet with it so that it can purify the atmosphere and absorb sunlight to make the atmosphere good for humans living. The anime is quite horrific because it is filled with some horrible blood-sucking scenes.

The show is probably one of those shows who are able to quietly compete with attack on titans. The show features a virus named, Gastrea which turns humans into monsters after infecting them.  The only way humans can survive is by living in a fort that is made up of material that monsters can’t escape and break. Also, there are females who have some part of the virus which gave them superhuman strength. They along with people who call them mentors come across each other so that they can defeat those monsters.

6. Kabaneri of the Iron Fortress

This is another anime that fans suggest is the closest to the Attack on Titan Anime. The story revolves around the time of the industrial revolution when a virus is attacking humans and making them monsters. Just like Attack on titan, there is also a fort that protects the humans from enemies. Another most similar thing is that just Like Attack on Titan, monsters also break into the fort in the beginning. Also, the main character just like Eren also becomes a monster and human hybrid.

A world where humans live under constant fear of monsters. The story is set in the year 2071, in the place known as New Asian Union. The monsters named Aragami hunt for humans and when they don’t find any they destroy everything. An organization, whose people call themselves as Fenrir comes together to help and protect humans from these deadly creatures. They possess a special weapon called “God Arcs”. The show is taken from a video game of the same name which is releases in the year 2011.

This is one of the anime which is my personal favorite. The show is set in the human world in which man-eating human-like monsters that are called ghouls live. They hunt for humans and feed on their blood to live. They have superhuman strengths and when they don’t find any human blood they go mad and kill humans mercilessly. The main character also becomes a half-ghoul and half-human when a surgery goes wrong after he contacts a ghoul. The Tokyo ghoul has a divided fan base, some like it and some hate it because of its story.

One of those anime which is known for its famous scenes of fightings and horror. This show follows a group of people who call themselves as Band Of Hawk. the main character Guts is a very powerful person shown in the series and along with their leader, they embark on a journey to fight the terror. Watch as the friends turn into foes and some unrealistic fight scenes.

The world is full of Goblins, who wish to kill humans. The story shows a priestess who is on a journey to find herself. he along with some members tries to do a contract job but all get killed and she is left alone. titular survived because she was saved by a fighter known as “Goblin Slayer”. he along with him embarks on a journey to kill goblins and do the work.