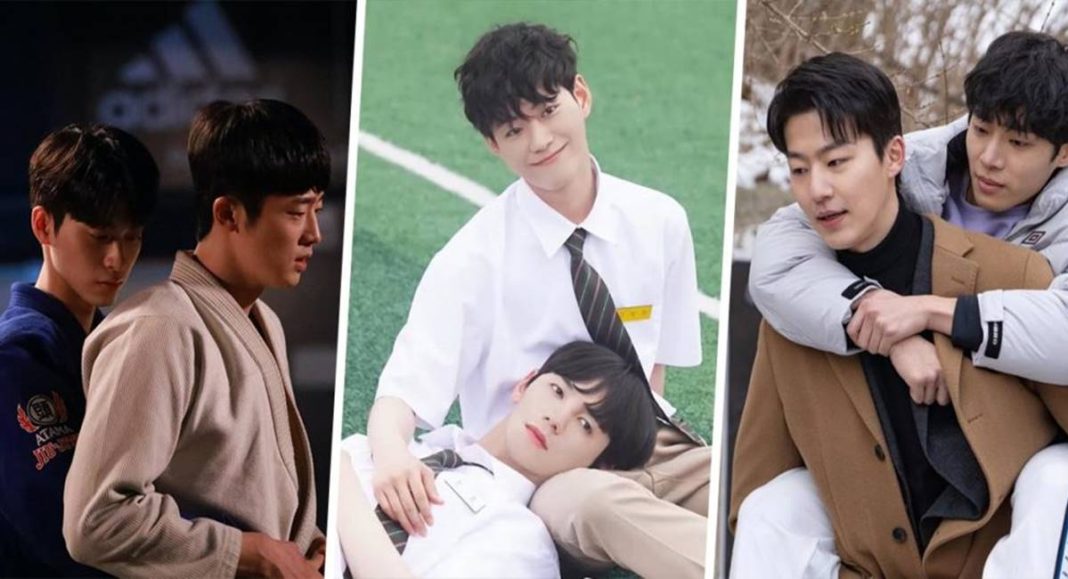 LGBTQ Couple: Another Hot topic related to Korean dramas which in LGBTQ+ representation on screen, and some shows are actually doing great in this Genre. American Shows were one once which started showing this representation on the screen. Korean dramas are still very conservative whether involving same-sex couples or small storylines. To an Asian audience, it may seem western, but nowadays they have a strong impact on society. So here is the list of ten best Korean dramas which show the love between the LGBTQ community.

Love alarm is available on Netflix. The story revolves around an app that tells people if someone near you loves you. Hye-young (Jung Ga-ram) is warned, discovers that it is another schoolboy, and pushes him into the bathroom to confront him. Hye-Young also prevented other students from being bullied by the app’s alarm sounding as they passed a group of schoolboys. the story is based on social app addiction which is very nowadays.

This K-drama is about a young male student who is very handsome and athletic and he is the crush of a girl. But when she confesses her love to him he reveals that he is gay and he like another guy. He feels very emotional after she gets sad after knowing that he is gay but he tells her that he cant change how he feels now because no one would believe him. But later the news spreads as someone was also listening to them and now he has to face the consequences. It will be very difficult for him to do things now.

3. Romance is a Bonus Book

There is not much talk about the LGBTQ in this drama but whatever is shown is worth giving a try in the first place. The x-drama has become known for its dreamlike romance, and there is one scene that has caught the attention of the audience. It happens early in Episode 2 when the male lead admits that the saleswoman is the one whose girlfriend was fooling him. But later things change and what happens in the drama is worth watching which one must find out by watching themselves.

The next Korean drama is not a full series drama but s short drama with only two episodes, but it was able to convey the message. The story is about three women, one is the former K-Pop singer turned actress who is a lesbian but she breaks uo with her girlfriend who is has known for eight hours. She along with the other two female characters, go through their life and experience many troubles. She also tries to get back to her mother. Fans of the show knew that the show was good and still they demand more episodes.

The show was aired in 2010 which is the first time anyone was brave enough to show a gay couple in a primetime Korean Drama which became very famous at that time. The story is about the Yang family, they live in a primitive culture and one of the eldest sons Tae Sub is gay and he is feeling love for a divorced professor Kyung soo. The family is against them and wants the son to marry a girl and have a happy life.

Another series aired in 2010 and also followed the relationship between LGBTQ+ couples. The story revolves around Han Tae Sun, a musical prodigy who struggles to understand his sexuality. In the process, he also develops a close bond with his mentor Oska. they help each other in tough times and he helps in the popular matter of oska which creates a love situation between them.

The story is about Joon Hae and his best friends Shi Won. He is gay and is in love with Shi won’s childhood friend Joon-jae (Seo Ing-ko). There are many scenes that drama fans remember, but after the show, the actor who played Jun-hee faced discrimination and speculation about his real-life sexual orientation. The show was one of the shows who were brave enough to show this genre in Korean drama which changed everything for Korean dramas.

This is one of the dramas where the audience only enjoys love, romance, and cute couples. The love with flaws is an exceptional show that fans couldn’t stop talking about. After agreeing to his sexuality, Ho-Dol soon meets bartender Won-suk at a gay bar. Their relationship quickly blossoms as Won-sukhelps Ho-Dol a cept who he is. When Ho-Dol is being bullied at school, Won-suk sits next to him and wraps his arms around him,  effectively silencing the discretionary student.

Mr- Heart is one of the kinds of Korean drama which marked the beginning of an era in Korean drama known as “BL Drama” which is a short form for Boy Love, a Japanese term that is used for manga series in which both the lead characters are male. K-Drama is the story of two athletic players who want to succeed

when one works with the other and has some bad feelings. The sooner they get to know each other, the sooner they realize that their feelings have changed. Can they pamper their new emotions without endangering everything? Found in the series.

10. Where your eyes linger

Where your eyes linger is another drama in the BL category which features romance and drama which is centered around two male characters. The series has things that are wanted by every K drama fan in this genre which is intense chemistry, romance,

and other things which can be seen and enjoyed in the lifetime of events. The story is about Kang-gook and Han Tae Joo who are friends for a long time and Kang-Gook is in love with him. Tae Joo has many girlfriends but none of them were loyal to him. Watch the show as they both try to come together in this drama.

I hope you will enjoy the Korean Drama which has been mentioned in the list. For more content like this please come again. Till then enjoy.