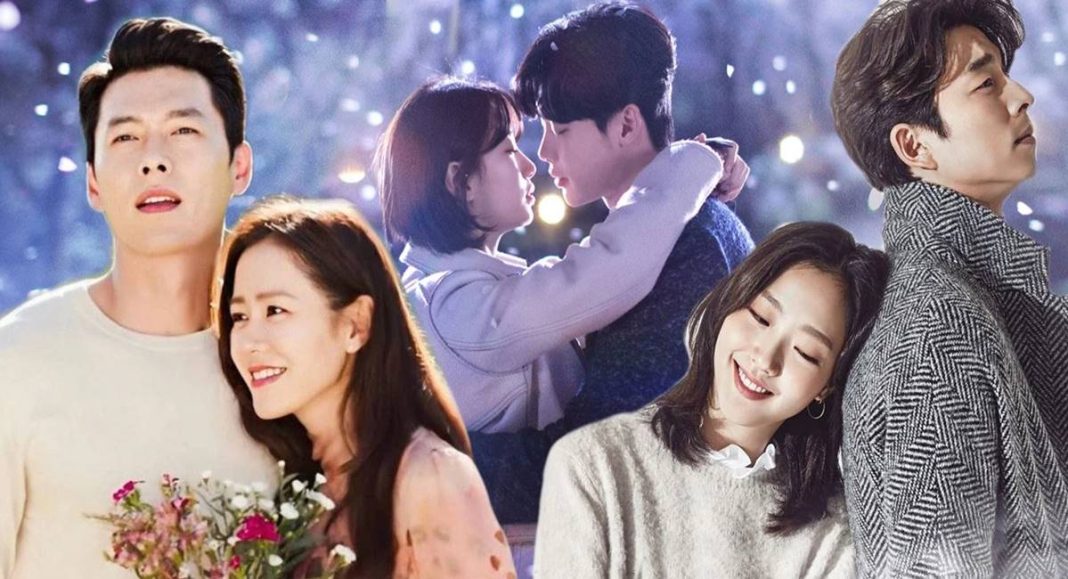 Romantic K-Drama: The valentine weak is going around and people are enjoying it very much. You must want to watch a light hearted romantic series with friends or partners. While you watch something so relaxing and comforting it not only touches your heart but also elevates your mood. With Korean things which are taking over the world, romantic K-Dramas are also in the demand. The perfect mix of the strong storyline, crackling chemistry between the lead pair, the comic timing makes you watch the entire series in once which is quite good.

This one is one of the most entertaining series of 2020, with an IMDb rating of 8.7. this is written by Park Ji-Eun and directed by Lee Jeong Hyo. The 17 episode series stars Hyun Bin and Son ye-Jin in leading roles. The story is of a south Korean Princess who accidentally lands in North Korea,

but an officer decides to help her get out, watch how they fall in love with each other, and do the things together to get out of there.

The show stars Kim Soo-Hyun, Seo ye JI, and Oh Jung Se. This K-Drama depicts the Emotional Healing of an Antisocial writer and a psyches ward caretaker when their lives intervene. The show is written by Jo Yong and directed by Park Shin-Woo, the how is rated 8.7 on IMDb. This series is 16 episodes long.

The inspiring romantic series is about a bunch of young people who call them as Entrepreneurs as they try to find their way in the Korea’s technology industry as they experience love and success. The series is rated 8.1 on IMDb which is written by Park Hye-TRyun

and Driected b oh-Chhong hwan. The star cast boasts Bae Suzy, Nam Joo-Hyuk, Kim Seon-Ho, and Kang Han-sa in pivotal roles .you must watch this series if you are a technology geek.

The romantic K-drama tells the story of a self-centered business heir whose life is turned upside down when his capable personal assistant decides to leave. The show, which starred Park Seo-Joon and Park Min-young in lead roles, was a smash hit, with an IMDb rating of 8.1. The 16-episode series is based on Jung Kyung-novel Yoon’s of the same name. Park Joon-Hwa directed this film which is available on Netflix.

This romantic comedy is directed by Oh Hyun–jong and stars Lee Sung–Kyung, Nam Joo-Hyuk, Lee Jae-Yoon, and Kyun Soo-jin in the Main roles. The story is of a group of people who are athletes in a college who are striving to excel in their fields. Among them is a weightlifting star

who meets her childhood friend who is a talented swimmer, after which he gets to know that she has a crush on his cousin. Watch how the story takes twists and turns in this story.

This one is based on a popular webfoot of the same name, the 10-episode series is about two classmates who are attracted to each other but the problem is that they are already in a cynical romantic relationship. But they somehow get involved in a friends-with-benefits equation. The series features Han So-hee and Song Kang playing the lead roles. This is written by Jung Won and directed By Ga-ram Kim and the show has a rating of 7.3 on IMDb.

This 14 Episode series shows the story of a nutritionist who meets her boss and later it turns out to be someone who she had slept with. This story features Sung Hoon, Ji-Eun song, and Jae-Yeong Kim form in the main cast. With a rating of 8.6 on IMDB, the series is directed by Kang Cheol- Woo. You can go and watch the series on Netflix.

3. Romance is a Bonus Book

With a Star cast that has names like Lee Na-ypung, Lee Jong-Suk, Jung Eugen, and Wiha–Joon in lead roles, the plot is about a man who is editor in chief of a publishing company who is at the pinnacle of success. However, a twist is waiting for him

as he meets a former copywriter from his past that is also looking for a job in the city. With a rating of 8.5 on IMDB, you can give it a go when you are feeling bored or just want to enjoy a good series that is comprised of humor and good things.

This one is on this list because the story is very painful and full of struggle. This story is about an injured soldier who meets a young surgeon and falls for her.  But it is not easy to get her as both the people are in different professions

and both differ in their Ideologies. Will they be able to keep their minds aside and fall in love with each other? Watch the series to find out the answer.  With a rating of 8.3 on IMDB, the cast has Song Joong-ki and Osng Hye-Kyo. You can watch the show on Netflix.

This one is a 16 episode long series in which the story is about a dentist who one day decides that he wants to continue his practice in a seaside village. As destiny would have it, her path crosses with a young person who is very smart and intelligent in everything who lives in the village. The series shows shin Min-a As YOOn Hye Jin and Kim Seon – Ho as Hoong Du sik. With an IMDb rating of 8.6, you can watch the series on Netflix.

So here are some Romantic shows you can watch on Netflix this valentine.