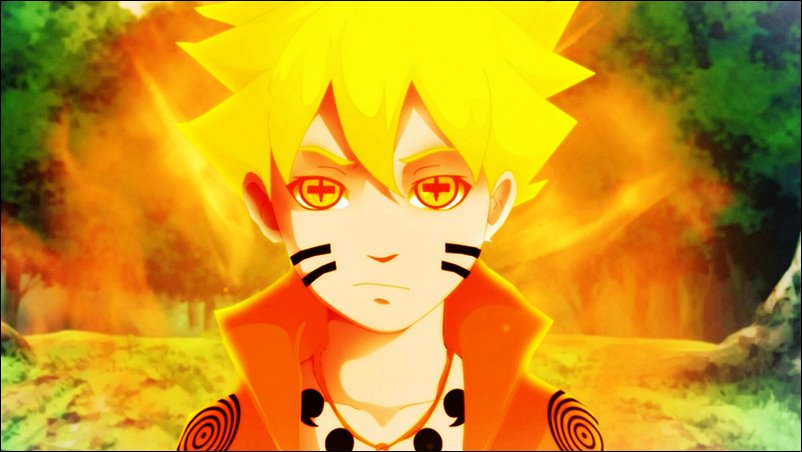 1 ⇒ Boruto is the Japanese pronunciation of the English word ‘bolt’. His name is a reference to his cousin Neji Hyūga, whose name means screw.

2 ⇒ When Boruto Uzumaki first appeared in the English Weekly Shonen Jump, his name was translated as ‘Bolt’. This was later corrected when the chapter was released in volume format.

4 ⇒ Boruto Uzumaki has 4 stars in evasion and ninjutsu, and 3 stars in unarmed hand to hand fighting.

5 ⇒ Kishimoto intended to give Boruto Uzumaki the Byakugan, but forgot to before releasing the chapter 700.

6 ⇒ According to the novelisation of Boruto: Naruto the Movie, Boruto Uzumaki’s hacked video game character is a Light Warrior who dual wields 2 swords called ‘Shadow Weaver’ and ‘Law Bringer’.

7 ⇒ Kishimoto confirmed during a TV interview that he gave Sasuke Uchiha the role of Boruto Uzumaki’s master due to the inspiration of Akira Toriyama’s like Son Gohan and Piccolo.

8 ⇒ In artwork for Boruto Uzumaki, Boruto Uzumaki is depicted with the Byakugan and in a chakra mode similar to the Nine Tails Chakra Mode.

9 ⇒ Boruto Uzumaki has been able to perform the “Shadow Clone Technique” even before becoming a genin.