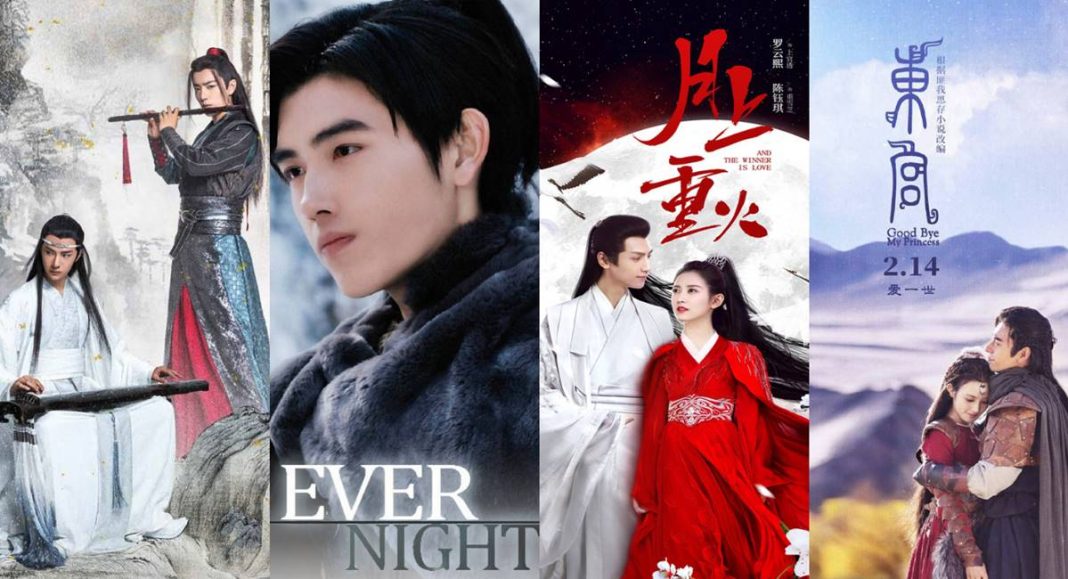 C-Dramas Based on Novel: If you enjoy reading a book and then seeing it adapted into a film or television show, we’ve compiled a list for you. Adapting novels into a show based on the novel is a common source of inspiration for Chinese dramas.

These are the Chinese dramas to watch if you want to read a novel and then see it come to existence, or if you want to fall in love with a drama and then experience it in greater detail as a book.

10. Nirvana in Fire (C-Dramas Based on Novel)

This historical drama is set in China during the sixth century. Lin Xie is 17 years old when his entire family is murdered after one of his relatives is falsely accused of committing a crime he did not commit. He is forced to flee and take a therapy that changes his look and renders him weak and unable to fight.

Lin returns to the capital twelve years later and seeks to purge the court of all the cunning officials. This series aired in 2015 and features 54 episodes. Each episode is 45 minutes long, so you’ll be able to binge watch for days.

This contemporary romance follows Xiao Nai, the coolest boy in college. He’s a gamer, a basketball player, smart, swims well, and is well-liked. On the other hand, Bei Wei Wei plays the same roleplaying game as Xiao and has recently been dumped by her in-game boyfriend.

Xiao and Bei start dating to compete in a special game tournament. Soon, his affections for her become tangible, and he must also woo her in person. Love O2O is a thirty-episode series that debuted in 2016. Each episode lasts around 45 minutes.

8. When a Snail falls in Love

Ji Bai has been allocating to work with Xu Xu, a criminal profiler. Xu Xu is socially awkward, despite his talent for deducing other people’s thoughts. This, however, is not the reason Ji Bai intends to dismiss her because she moves at a snail’s speed.

Xu lacks the physical abilities needed for the work. However, they are both talented in their fields of expertise, and their admiration develops into love as they pursue their investigations. This drama debuted in 2016 and consists of twenty-one episodes lasting roughly thirty-three minutes.

This historical fiction is loosely based on real-life accounts of Empress Feng. Princess Feng Xin’er is the protagonist of the story. She’s a sweet girl, but one day her entire family is murdered, and she’s left to fend for herself.

She ends up in enemy territory by accident and assumes the moniker Li Wei, posing as the Prime Minister of Northern Wei. Political, romance and a lot of drama ensue. There are fifty-four episodes in The Princess Wei Young, each lasting about 45 minutes — this series was also released in 2016.

6. Cruel Romance (C-Dramas Based on Novel)

Rong Jinxiu travels to Shanghai to found why her entire family was murder. During her inquiry, she meets Zuo Zhen, a triad leader. Mistakes and accidents ensue, and the two begin to fall in love.

However, a businessman develops feelings for Rong and tries to captivate her attention. Zuo becomes possessive, which leads to a sequence of tragic incidents. The show premiered in 2015 and consists of forty episodes, each lasting approximately 45 minutes.

5. My Sunshine (C-Dramas Based on Novel)

Zhao Mo Sheng is a cheerful university student who is intelligent and has a positive attitude. On their first meeting, she fell in love with He Yi Chen, one of the top students in the Law faculty. He Yi Chen warmed up to her over time, and the two became a loving pair. He abruptly breaks up with her one day, and her father forces her to leave without ever receiving an explanation from Yi Chen.

Zhao Mo Sheng goes home seven years later and quickly recognizes him in a busy store. Details and secrets about their break-up and the years between are exposed as their paths inexorably meet in the present. Is it possible for the two college sweethearts to reunite?

4. Boss and Me (C-Dramas Based on Novel)

Feng Teng, the boss of a large company, has a younger sister who requires a blood transfusion due to a rare blood type. He locates Xue Shan Shan, a coworker, and requests a blood donation. After that, Shan Shan’s brother and sister are indebted to her. Instead of paying her off the way Feng Teng usually does, his sister proposes sending her nutritious packed lunches to help her recover from the blood loss and make the thank you more personal. Shan Shan enjoys eating, and her enthusiasm for lunches, as well as her general bright and happy demeanour, begin to soften Feng Teng’s heart.

The plot follows Han Yun Xi, a woman doctor who marries into the royal family and becomes entangled in the palace’s political intrigues while falling in love with her spouse. The story is set during a turbulent period in which the country has been divided into three kingdoms: Tian Ning, Western Zhou, and Northern Li. Long Feiye, the Emperor of Tian Ning, is an intelligent and sceptical man who fears his subordinate. To lower Long Feiye’s spirits, the King arranges to marry an “ugly” woman named Han Yun Xi.

Han Yun Xi is a lovely and talented woman who comes from a family of doctors and is skilled in poisons. Likewise, she is compelled to obey the king’s edict and is merely a royal consort in the name. However, circumstances allow her to demonstrate her abilities repeatedly, earning Long Feiye’s admiration. She also makes a friendship with Gu Qi Shao, the Master of Yao Gui Valley, at the same period.

2. Untouchable Lovers (C-Dramas Based on Novel)

Tianji Tower, the pugilistic world’s most powerful organization, is hell-bent on deposing Liu Ziye, the dictatorial monarch of the Liu Song dynasty. Tianji Tower replaces his sister Liu Chuyu with their apprentice and Princess-lookalike Zhu Que to complete their purpose. Rong Zhi, the Princess’ learned friend, turns out to be a spy from Northern Wei, and Zhu Que encounters him.

The relationship between Liu Chuyu and Rong Zhi finally falls apart due to misunderstandings and opposing loyalties, and the latter fakes his death to win Chuyu’s forgiveness. Then the imperial astrologer erases Liu Chuyu’s memories, and Rong Zhi’s mind is eras. Chuyu is order to marry Northern Wei’s Prince regent, who is none other than the now Rong Zhi, five years later.

The Queen of Qing Qiu, Bai Feng Jiu (Dilraba Dilmurat), is the world’s only red nine-tailed fox. While seeking cultivation in the mountains, Feng Jiu is attacked by a wild beast and is saved by Dong Hua, the first emperor of Heaven. Feng Jiu joins Dong Hua in defeating the Demon Lord, grateful and indebted.

Feng Jiu recognizes her gratitude for Dong Hua has gradually blossomed into love as the two spend time together. On the other hand, Dong Hua has long forgotten what love is. Will many lives be enough to bring these two hearts together, even if the coldest hearts can melt with time?