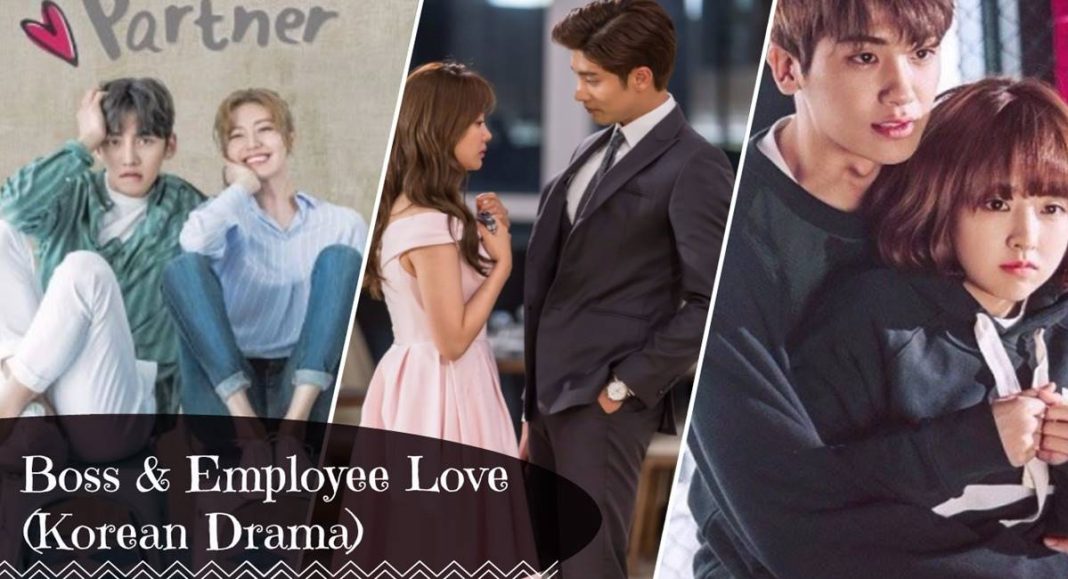 Top 10 K-Dramas About Falling In Love With The Boss:

Falling In Love: K-dramas can go to different extents to please the audience. K-dramas give all the varieties to the audience. There are suspense, thriller, crime, romance, comedy and what not. Romantic K-dramas are very popular among all the people. One of the popular ways of making the audience hook to the screen is making the employee fall for the boss. K-dramas have utilized the idea very well. These dramas give the drama a unique storyline. Many people might not admit but they get attracted to the employee boss’s love idea. If you are looking for such dramas this blog is for you. This blog gives the list of best K-dramas centered on the idea of falling in love with the boss.

Oh My Ghost is a supernatural and fantasy based drama. The drama is about a woman working as an assistant chef in a restaurant. The lady is in love with her boss who is a recognized chef. lady is very naive and shy and cannot express her feelings. The lady has the ability to see ghosts and spirits.

One day the young woman gets possessed by a ghost. The ghost is that of a lustful virgin lady. The lustful ghost thinks that the only way to the afterlife is by losing her virginity. The ghost decides to seduce as many men as possible. The ghost then uses the young women’s body to fulfill her dream. The timid lady then turns into a confident and fire cracking woman. The lady then grabs the attention of her boss because of this sudden change of nature.

Radiant office is the story of a 28 year old girl named Eun Ho-won. Eun Ho-won is tired of her multiple part time jobs. She desires to get a full time job. She fails many times and finally decides to suicide. At the hospital, she receives two news, one happy and one sad at the same time. She gets hired for a job but at the same time gets diagnosed with a terminal disease. Eun Ho-won finally thinks that she has nothing to lose. She joins the job and decides to change her perceptions about life. The series depicts a unique boss employee love story. As the boss, Seo Woo-Jin initially considers the women as neck pain and headache for the company. Their awkward relationships gradually change into something much more.

The drama series is actually about an immature and useless at work director of the DN group named Cha Ji-Heon. The chairman of the DN group is his father. Cha Ji-Heon has a rivalry with his cousin Cha Mu-won. Mu-won is exactly the opposite of Ji-Heon. He is hardworking and talented. The drama series features two love triangles. One is among the brothers and their common love interest. Both the brothers live the same girl which increases their rivalry at a personal level other than the professional level. The drama also features a girl named Eun-Seol who is struggling for a job. The girl had very low academic performance and that was troubling her in getting a job. She finally gets a job at the DN group as the secretary of the director. In the fear of losing her job, Eun-Seol works diligently.

The new secretary proves to be lucky for Ji-Heon. Both of them help each other with their problems. With the help of Eun-Seol, Ji-Heon proves himself as the capable leader of the DN group. Eun-Seol hard work and diligence get the attention of both Ji-Heon and Mu-won. Things get troublesome when we see the second love triangle of the series. This time both of the brothers fell in love with Eun-Seol.

Master’s Sun is a K-drama again coming from the category of supernatural and fantasy dramas. The story of the drama is about a girl named Tae Kong-Shil. The girl has the ability to see ghosts and spirits. She got this ability when she met with a bizarre accident. The accident gave him the ability to see ghosts. Her unique ability invites only troubles for her. He works as a cleaning lady in a shopping mall. She was not able to do her job properly because of her troublesome ability.

My Secret Romance is a drama revolving around an accidental one nightstand. Yoo-mi goes to the Gangwon-do resort to attend her mother’s second wedding. There she meets a boy named Jin-Wook. She liked the joyful nature of Jin-Wook. Their talk and attraction towards each other ended up into a one night stand. But Yoo-Mi decides to run away in the morning without telling Jin-Wook. Yoo-Mi forgets it as an accident. But Jin-Wook develops feelings for the girl. 3 years later Yoo-Mi gets the job of nutritionist in the same company where Jin-wook works. Jin-Wook’s father is the chairman of the company. As Jin-Wook has developed feelings for the girl he tries to stay close to her. Jin-Wook’s father goes to the girl’s home and finds out about a 2 year old baby.

The baby was Yoo-mi’s brother. But he mistakenly thinks that the child belongs to his son. He thinks that the child is the consequence of their one nightstand. He tells this to his son. Jin-Wook finally confesses his feelings to her. Jin-Wook starts taking care of the girl thinking that the baby belongs to him. But the drama doesn’t end happily there. Many problems arise amidst their love story. But Jin-Wook and Yoo-Mi manage to keep their love alive amidst all the troubles.

Rich Man is a romance based drama series. The drama features Lee Yoo-chan who is the CEO of a top notch IT Company named “Next in”. The CEO is suffering from a facial recognition disability. Because of this disability, he is not able to identify the face of his first love. In one of the hiring drives of the company, many aspirants came to appear in the interview. One among all the aspirants was Kim Bo-ra. Kim Bo-ra is famous for her photographic memory.

She can memorize many things in very little time. Yoo-Chan humiliates many of the aspirants and also insults Bo-ra. After getting insulted by Yoo-Chan all the aspirants ran away except Bo-ra. She stood for herself and confronted the CEO. Finally, she leaves the office. The company afterward then gets in the need of a person who can memorize things easily. The company then contacts Bo-ra and finally hires her for the job. The professional relationship that emerges between Bo-ra and the boss converts into friendship. Bo-ra helps the boss with her disease and also helps him with his personal problems. This friendship finally turns into love.

Strong Girl Bong-Soon is truly an employee boss relationship drama. The story of the drama is about a girl who has got immense power from her genetics. Her immense power is something that she has received from her family.

She has the ability to beat up many bullies at once easily. Seeing her superhuman abilities she gets hired by the CEO of a big company. The CEO of the company was in love with the girl’s best friend. With time the CEO realizes that he is developing feelings for the girl. The girl also helps the CEO in getting out from the trouble of kidnapping and various threats using her powers.

The story is about a young CEO named Eun Hwan-ki and an employee of the company named Chae Ro Woon. Hwan-ki appears to be cold and pricky from the outside. From inside he is very shy and timid. He tries to avoid talks as much as he can. His employees don’t even know him properly nor does he know his employees.

Ro Woon is an employee of the company. She is confident and dynamic. She is the exact opposite of her boss. Eun Hwan-ki is also good at work. She gets appreciated by all for her hard work. She is liked by everyone but she is interested in the CEO and wants to know more about him. Eun Hwan-ki also plans to reveal to everyone who really the CEO is. She wants to know and tell everyone what the boss is from inside not what he shows to everyone.

The drama series is the story of a young girl. The girl believes that she is born unlucky. She is highly superstitious about her luck. She tries to take every precaution to avoid his bad luck. wants to save her sister. According to a shaman, the only way to save her sister is to sleep with a person born in the year of the tiger.

She meets her boss and the CEO of the company. Her boss was born in the year of the tiger. She has to sleep with her boss to save her sister.

The story of the drama is about the boss employee love story. The love story is between the CEO and his secretary. The secretary has been helping the CEO for a long time handling all his work. The secretary suddenly decides to quit her job. The idea of resignation doesn’t go well with the CEO. The drama is one of the most popular romance dramas of all time.