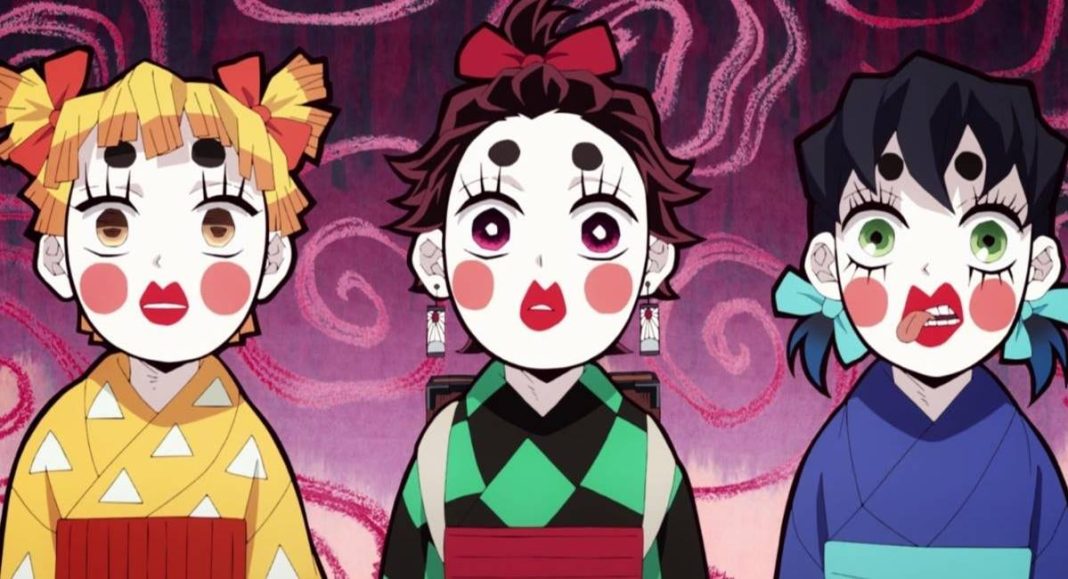 Top 10 Most controversial Moments Things in the Demon Slayer 2022

10. How can Nezuko’s Bamboo can control her hunger for blood

Yes, seems funny or hard to believe but yes, there is things that make her stand out from other demons.  She is one of the most powerful characters in the entire Anime, but when she is faced with Daki, she easily defeated her which shows that Nezuko is as powerful as an Upper level Demon. But this feels some what awkward because the bamboo gag she wears makes it hard to believe that it can easily control it. That is why Sanemi deserves applause even when he mistreated Nezuko.

Tengen is a Shinobi who has three wives to be honest which makes us thinks about it. Tengen is shown to have three beautiful wives who he truly loves. Yes, today this thing is considered to be Taboo but in old Times people practiced Polygamy which was very popular. This is not the first time on screen that this has been shown but it has surely made a controversy among the anime fans and beyond.

After Rengoku Died, Tanjiro went to meet his father at rengokus Home. But the things were not as he imagined, when he arrived he met with Rengoku’s father who is a drunkard who has no respect for Demon Slayers and he attacked Tanjiro without thinking anything about it. The thing is that he was a former Flame Hashira himself but today he is just a drunkard without any will to live after her wife died.

Tanjiro used his newly mastered Water Breathing techniques during his battle with the Temari and Arrow Demons to demonstrate why he was chosen as a member of the Demon Slayer Corps. Unfortunately, Tanjiro broke Demon Slayer’s power system and confused thousands of fans in the process. Demon Slayer’s power system is straightforward. Members of the Demon Slayer Corps can improve their strength, speed, and durability by mastering their breathing. Though the swordsmen appear to be using the elements in their attack, this is not the case. Or so fans thought until Tanjiro broke his fall with a water breathing technique that should have done nothing but dull his blade.

6. Zenitsu is introduced as A coward person but he is a master swordsman

Zenitsu is either loved or despised by Demon Slayer fans. The blonde-haired side character is an incredibly powerful swordsman who draws fans in with his mastery of Thunder Breathing’s first form. Zenitsu, on the other hand, is a coward who expresses his fear openly and loudly. There would be no reason to question Zenitsu’s character if fans could look past his fear of demons, danger, and pretty much everything else he encounters in life. Unfortunately, Zenitsu’s fear is such an integral part of his personality that any praise he receives is tainted by controversy.

5. Tengen is a pervert and tries to abduct Aoi for the mission.

Tengen has a very unique and unpredictable personality which shows that he is very hard to believe and often makes it hard for the fans to believe in this. It is shown when he dressed two mice like him so that they can make up with his personality

and also convince three girls to join him in the Marriage, he is just a flashy dude. When he was introduced he was trying to Kidnap Aoi which is quite surprising for a Hashira, thank God Tanjiro and his friends arrived and saved Aoi from him.

Last year Demon slayer – Mugen Train Movie was released and became highest grossing movie in a short time. In the movie, everyone appreciated Rengoku but no one knew that they are watching him for a short time in the movie. He was very admiring but he lost his life against Akaza the upper level Moon which made fans cry for little.

Sanemi Is one of the most powerful demons slayers and has one of the coolest designs but he was the one who actually mistreated Nezuko that is too in front of Tanjiro when he stabbed his sword in the box which made Nezuko bleed. This was still one of the controversial moments that fans didn’t like when a kid got stabbed.

The anime starts just like most good shonen anime in which the Main protagonist’s family gets killed in the first episode. A demon mercilessly kills his whole family and makes his younger sister a blood sucking demon.  But Nezuko became a Demon who has still feeling of being human. This thing made the anime more interesting but it created a controversy that is all the members of his family got killed when Muzan stabbed them then how was Nezuko Manages to getaway.

The most contentious aspect of Demon Slayer is the fact that anyone would ever claim that Demon Slayer is contentious. The hit new anime series has millions of fans, making looking for flaws a dangerous game. Of course, no top-tier anime can escape the wrath of dedicated anime fans

looking to strengthen their opinions by anticipating controversy. This was Tanjiro’s attitude while preparing his body to handle the strain of Water Breathing. Greatness necessitates criticism, and criticism begins with a ruckus. This is true of any anime, including Demon Slayer, which is masterfully crafted.