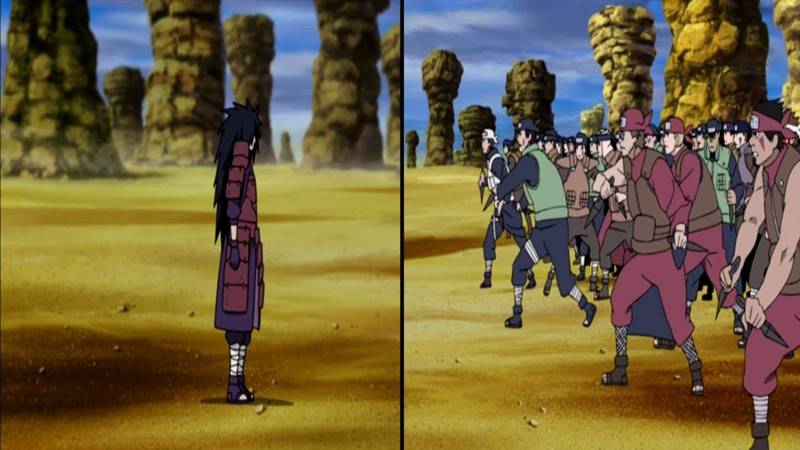 One Man Army Anime: One way to show how good an anime character is is to show him how he fights many enemies in battle. Whether you win or lose, it’s still fun to see the characters show patience, despite the very high odds. So let’s get energized by watching this awesome anime vs many fights.

The first battle many anime fans face is for the reborn Madara Uchiha to destroy the Shinobi Alliance without breaking a sweat in Naruto. A lesser-known example is Inuyashiki, a show in which an older man with the body of a super cyborg fights the Yakuza to save a kidnapped girl.

Before the gods of destruction, androids, alien conquerors, and the demon Piccolo’s return, the Red Ribbon Army was the greatest threat to the world. Until a little boy with a tail came on the scene. In search of the Dragon Balls to revive his friend Upa’s father, Goku’s mission leads him to a final confrontation with this mecha-filled militia.

Be it bullets, rocket launchers, or even snipers. But, unfortunately, the army is powerless to prevent Goku from completely eradicating his forces. And that was even before he learned how to become a Super Saiyan.

9. Rimuru vs the Kingdom of Falmuth

Rimuru may be a laid-back guy and a benevolent ruler, but he too has his limits. After being invaded by Falmuth’s armies, Rimuru returns to find his house in ruins and his people massacred. Ready to do whatever it takes to bring them back, Rimuru decides to wipe out the tens of thousands of human soldiers and harvest his souls to become a demon lord.

What follows is a one-sided massacre in which Rimuru kills his enemies with a single spell. Rimuru may wish for humans and monsters to coexist, but threatening your home and people is a guaranteed one-way ticket to oblivion.

Who would have thought that this average Joe from Japan would be a blast? Thanks to the magic runes he was given as a confidant to Louise the Zero, Saito can wield and master any weapon virtually. However, the natural limits will be revealed in Saito’s final battle against the Kingdom of Albion. Saito refuses to let Louise go on a suicide mission to stop Albion’s forces and takes her place.

With nothing but his sword and clothes on his back, he only held off Albion’s massive invasion force. Although he eventually felt overwhelmed, it is still surprising that while he has been, Saito has taken in so many soldiers to protect the person he loves.

7. Douglas Bullet against Everyone

Let Oda create a villain brave enough to take on some of the most extraordinary powers in One Piece. After the collapse of the Pirate Festival, Luffy and the other worst-generation supernovae are challenged by Douglas Bullet, a former member of the Roger Pirates, on a par with the Dark King Rayleigh.

Not only does Bullet defeat most Supernovae with ease, but he also makes things run full blast by using his awakened Devil Fruit powers to transform into a giant monster that allows him to do so with members of the Seven Lords of the War, Sabo, and the Revolutionary Army. Including the marines and their hunter. Despite losing in the end, there is no denying that Bullet’s power is truly legendary.

Beautiful and powerful, there is little that the most potent wizard in Fairy Tail cannot do. During Grand Magic Games’ Pandemonium event, Erza takes the competition by storm after declaring that he will take on all the high-level monsters on his account.

Despite being outnumbered, Erza uses her arsenal of magical armor and weapons to counter and overwhelm whatever her monstrous enemies throw her way. With sheer strength and untamed willpower, Erza accomplishes the impossible by single-handedly destroying all 100 monsters. It’s moments like these that remind us why Erza deserves the title of Titania.

5. Aizen against Everyone (One Man Army Anime)

Aizen may be arrogant, but there is no denying that she has the power to support him. After the fall of the Espada, Shinigami and Vizards team up to end their genocidal ambitions. While it initially appears that both groups and their different abilities have cornered Aizen, it isn’t long before he turns his hope of victory into despair.

Not only was Aizen unaffecte by her attacks, but he also revealed that he manipulate her from the beginning before brutally taking her down. While Aizen’s opponents are by no means weak, they can also be insects for someone of his caliber.

4. Father against all (One Man Army Anime)

If your opponent is the immortal who wiped out an entire civilization, it is a safe bet that you have a great fight ahead of you. After foiling his plans to absorb everyone’s souls into Amestris, Edward Elric and his many allies launch a barrage of military and alchemical might to wear away Father’s dying power slowly.

Cornered, Father goes insane and unleashes his alchemical abilities to quell any remaining resistance. However, through great sacrifices for Alphonse and Greed, Edward turns the tables by dismantling him back to the size of the dwarf in the jar.

3. Utsuro against All (One Man Army Anime)

Immortality can often be more of a curse than a blessing, and no one understands this better than Utsuro. Due to his eternal nature, Utsuro suffered inconceivable pain and misery from humanity, resulting in the development of various personalities that he ultimately killed after deciding that the only way to end all suffering is through the world.To destroy.

With his immortality, Utsuro’s status as a legendary swordsman makes him an unstoppable beast on the battlefield, forcing the trio of Yorozuya, Umibozu, Kamui, and the Shinsengumi to band together to defeat him. Despite such an impressive alliance, Utsuro still manages to leave behind a mountain of corpses to end it all.

2. Alucard against all (One Man Army Anime)

Let the most powerful vampire in the world decimate his enemies in the most brutal way possible. As London becomes ground zero for a massive battle, Alucard encounters the armed forces of the Vatican and the Millennium Organization.

The situation is so dire that Integra orders her to unleash his final form, Level Zero. Alucard summons the souls of everyone he has killed in his long life to aid him in battle. Unfortunately, both armies are soon overwhelme and eaten by Alucard’s confidants in a wave of blood and the undead.

This man believes in strength in numbers and crushes it with his heels. After Madara is brought back to life, Madara harshly reminds the Shinobi Alliance why he is known as the strongest shinobi. While warming up to his newly resurrected body,

Madara kills hundreds of ninjas with nothing but his bare hands before intensifying his attacks and wreaking even more havoc. Only when he defeats the legendary Rinnegan does he finally get severe and conjure up not one but two giant meteors. Madara is so imposing that he is Divine Wrath.

ABOUT US
Animesouls was founded in 2016 by Vaibhav Jain, having the main objective of providing copper-bottomed statistics about the fields mentioned above in which we claim expertise.
Contact us: [email protected].com
FOLLOW US
© Copyright 2021 Animesouls