Home ANIME Top 10 Voice actors of Of Demon Slayer and where you have... 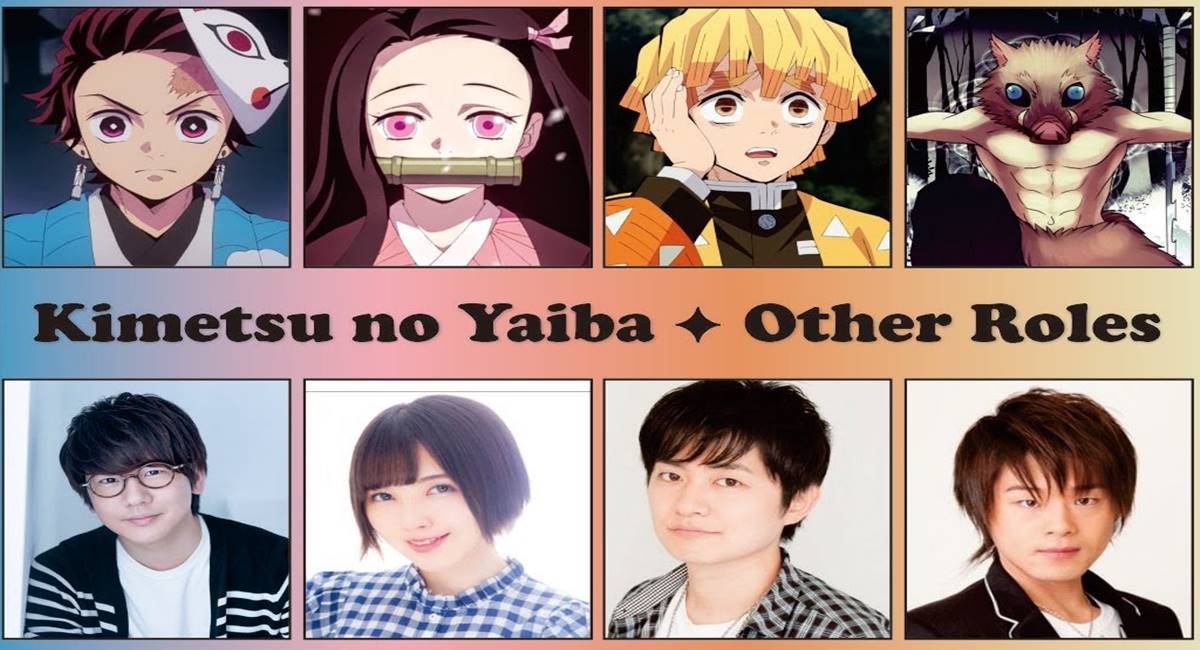 Voice actors: Demon Slayer is a very popular anime nowadays which took control over the world.  The animation is so good that makes it is worth watching and also voice actors which makes the anime experience more realistic. Currently, Demon Slayer is airing its 2nd season. The story is about demons that kill humans for their blood but there are Demon Slayers who protect humans from them. But it is not as easy a job as it sounds because all, demons are very powerful in their area. This anime features some of the greatest voice actors who really know how to bring any character to life. Fans can easily guess their favorite voice actor if they look closely.

10. Natsuki Hanae from Attack on Titan and Platinum End

The main protagonist of the show is famous for being a hardworking person who saves other’s lives without thinking about himself. His voice actor Natsuki Hanae has voiced many minor and major roles in the anime industry. He recently voiced the angek revel in the Platinum End and Falco Grice in the Attack on Titan. He is also going to voice the villainous character Quincy in the upcoming Bleach series.

Akaza is one of the twelve moons in the anime, who killed Rengoku, the Hashira. He is a very dangerous warrior but even he fears the dark side of the Muzan, but he also has grudge against Tanjiro who stabbed him when he was running away. His voice actor Akira Ishida has had many roles in diverse anime. He also voiced cancer cells in the anime Cells at work and also portrayed Tsukasa Eishi in the anime Food Wars. He also voiced Hyoga and Apollo in cyborg in 009.

Well, the most less heard character in the show is Nezuko who just has to say the word “hmmp hmpp. Since she wears a bamboo muzzle and is often asleep to save her energy and hunger for human flesh. Still, her voice actor has been able to express Nezuko’s emotions through the few lines she had early on, her humming grunts and whispers in the show. Her voice actor has also voiced Tsukasa in Tonikawa anime, And Nene Yashiro in Toilet- Bound Hanako – Kun.

The main villain of this anime, Muzan Kibutsuji is the most powerful demon of the series. He is the one who created all the demons. He likes killing people for fun but he is afraid to come in sunlight as it will burn him. His voice actor Toshihiko Seki, has voiced Roles in several other anime series- Kaien Shiba the soul Reaper in the bleach. And also Nen Coach Wing in the anime Hunter X Hunter.

Zenitsu is one of the major characters in the anime, he is knowns for his cowardice and constant shouting for help. He uses thunder breathing when he is asleep in which he can move with an astonishing speed. He is voiced by Hiro shimon, who also voiced the Villain Dabi in My Hero Academia, and also Connie springer from Attack on Titan. Also voiced Nacht Faust in Black Clover and Rindo In Tokyo revengers.

Tengen Uzui is the flashi Hasira who likes to dominate other people. Uzui is the star of the Entertainment District story arc and the flashy sound Hashira. He unofficially took over as Tanjiro’s Hashira mentor and guide from Kyojuro. Tengen wields two Nichirin blades that are chained together and have three shinobi “wives” who assist him in his hunt for demons. He’s even got smart mice on his side. Katsuyuki Konishi, who has voiced many roles in anime, is Tengen’s voice actor. In Fairy Tail Zero, he voiced Yuri Dreyar, Juggernaut in Fire Force, Dreyfus in The Seven Deadly Sins, and Sheepshead in One Piece.

In the movie Demon slayer Mugen train we saw Rengoku fighting the Demon and saving lives of many people. He is a very energetic and loving hashira who practiced diligently to succeed his father who was also a Flame Hashira. his voice actor is Satoshi Hino who has also voiced Ibara in the anime Akame Ga Kill, and Kamui in the Popular series Gintama.

Shinobu is a very powerful member of the demon slayer corps with a unique fighting style, he uses Nichirin Blade to take down demons who are more stronger than her. Shinobu uses poison on her Nichirin blade rather than brute force to defeat demons much larger and stronger than herself. As her butterfly-shaped hair accessory suggests, she is also a member of the butterfly estate. Saori Hayami, a busy voice actor who portrayed the swordswoman Kagura Mikazuchi and the gentle otome heroine Maria Campbell in My Next Life as a Villainess, voices Shinobu. She also plays Toko Sakurai in the recently released josei anime series My Senpai is Annoying.

Giyu is the first Hashira we saw in the anime and became an instant fan of him who saved Tanjrioa and Nezuko from the Demon slayer corps. Giyu saved Nezuko Demon against the Hashiras who wanted to kill her. His voice actor Takahiro Sakurai has voiced many actors, he voiced the Ayame Sohma in fruits basekt and also Knight Griffithe in Berserk anime.

Inosuke is the most underrated character in the show according to me. He is similar to wild boar merciless and without any confusion. He was raised in the mountain which made his senses great. His breating style is also unique which makes him stand out from others in the anime. His voice actor has given voice from Soma Yukihiro in the Anime Food wars and the villain of Re zero Betelguese. He also voiced Futaro Uesugi in the Quintessaentiall quintuplets and the Nicol Ascart in My next Life as a villainess.