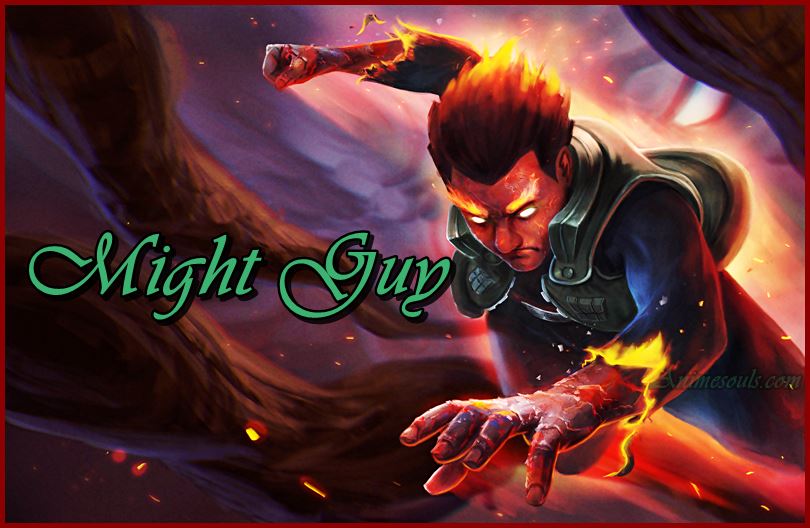 1 – In the “Shonen Jump magazine”, Viz- rendered Guy’s name as ‘Mighty Guy’ in some of the earlier chapters, this was changed back to ‘Maito Gai’ in most of the graphic novel stories, and later changed to ‘Might Guy’ when the new guidebooks were released.

2 – The name ‘Might Guy’ is a joke aimed at the ‘hot headed hero’ archetype that appears in many anime and movies.

3 – Might Guy’s appearance and mannerisms seem to be based off those of Bruce Lee. Guy even wields nunchaku and wears a jumpsuit.

4 – Studio Pierrot’s Settei sheets of Guy show that he was 141cm in Naruto Shippuden the Movie The Lost Tower, 151cm during the Third Shinobi World War, and 170cm during the Nine-Tailed Fox’s Attack.

5 – Might Guy’s hobbies are repeated side steps, and hitting focus mitts.

6 – Might Guy wishes for a rematch with Hatake Kakashi.

7 – Might Guy’s favourite foods are curry udon and super-spicy curry rice, though he finds it impossible to dislike the food.

10 – In Ultimate Ninja Heroes, Might Guy calls himself the Beautiful Savage of the Leaf Village.

11 – In Naruto Shippuden episode 359, Might Guy states that he is an agnostic of the Uchiha’s patron deity, which is located in the Naka Shrine.