Demonic Illusion: Toad Confrontation Chant – is on sound based genjutsu passed down on Mount Myōboku. Because learning it requires so many long years of training, only the Two Great Sage Toads Fukasaku and Lady Shima have the skill’s to perform it.It is said the most powerful genjutsu in world their armoury. It is more powerful and only has to reach the target sense of hearing to be a success. Even if there are several hundred targets there, they are completely disconnect from each other. Inside the genjutsu world, the target are surrounded from all sides by the four toad samurai, with their body and mind completely sealed between their hand’s in an illusionary cube of water. The four un moving toads won’t lift the complete binding until the user give the order to them . After the enemie have been caught in the genjutsu, all that is left to do is to strike and the finishing blow in the real world, with Mount Myoboku’s secret Stone Swords (Ishiken) which are driven into the targets heart’s like a wedge. 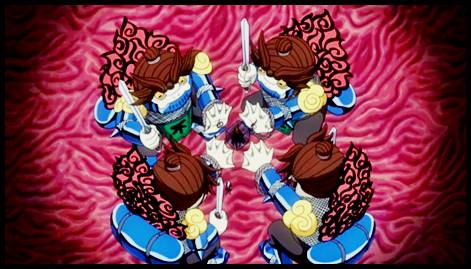 This Technique belongs to Ranmaru, Ranmaru is able to cast a Genjutsu involving the creation of “silhouettes” or “illusory” beings as a mean’s of distraction. The entities are so realistic that they even have their own chakra pathway system, which can fool even the Byakugan. Where a shadow is attacked, it automatically disappears like a ghost and then reappears. This technique can also become more effective when used in conjunction with Hiding in Mist Technique. 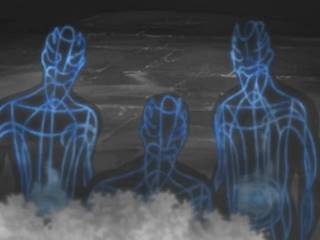