Attack on Titan: Coming in at the bottom of the list, we have plus sized Levi. During his

25.5 chapter stay (I count the Levi side story as half a chapter), Mike Zacharias made a

talk with during a party. Still, despite his quirks, Mike Zacharias proved himself to be an

invaluable asset to the Survey Corps (I hear he’s second only to Levi!). Mike Zacharias met

his end at the hands of the Zeke, unarmed and alone, crying in terror as he tried to defend

himself with no Vertical Equipment, before being horribly devoured. This death has always

me as one of the few deaths (alongside Marco’s)

that I wasn’t able to predict in the series. Almost every other death (the original Squad Levi

and Kenny, for example) has been telegraphed to the point that it’s always a bit obvious

when a character has come to the end of the road, but Mike Zacharias’s was a death that

legitimately blind sided me. Of course, after rereading the chapter, it becomes a bit more

his abilities, unless Isayama wanted to drive home how dangerous Zeke is?), and this fact

is enough to bump Mike Zacharias down in the rankings. 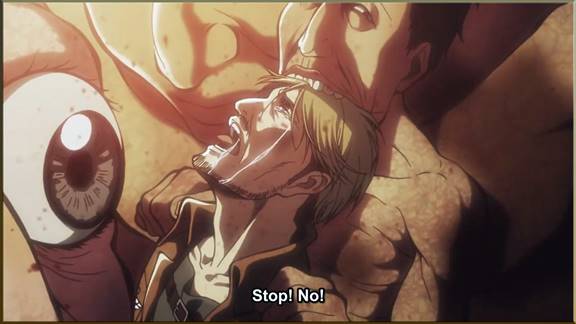