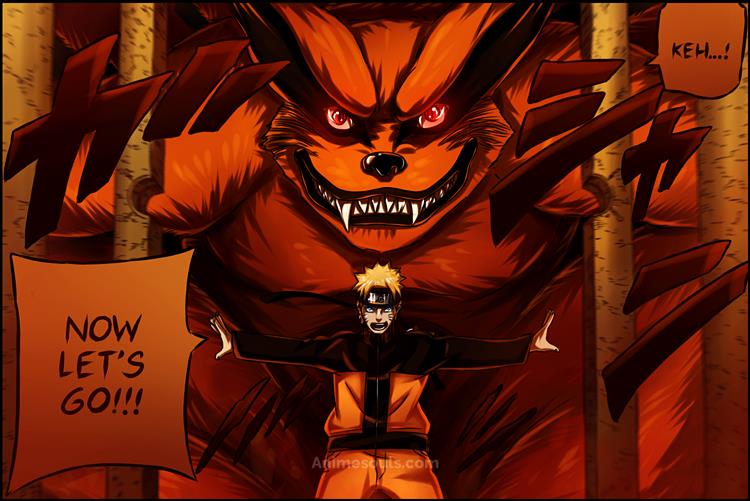 1 ⇒ Kurama literally means (nine lama). Masashi Kishimoto was mainly inspired to create Kurama (Nine-Tail) based on the character with the same name from the manga series Yu Yu Hakusho. The name may also reference the Mount Kurama (Kurama yama), the sacred mountain said to be the home of Sojobo, a tengu who taught the art’s of swordsmanship to Minamoto no Yoshitsune.

2 ⇒ A kitsune (fox) is a popular animal yokai in Japanese folklore, and is very well-known to be a cunning trickster with shape shifting abilities, to which on occasions, use to transform itself into “a beautiful Girl in order to seduce men”, possibly the inspiration for the Sexy Jutsu. Naruto Uzumaki even thought Kushina Uzumaki would be Kurama, when they first met. They are also said to be rival’s to the tanuki, which created an old Japanese proverb, A fox and a tanuki matching their cleverness (kitsune to tanuki no bakashi ai), meaning as much as 2 sly characters trying to out smart one another. However, “kitsune” are known to keep their promises, a trait Naruto Uzumaki has, his nindo is to “never go back on his word”. It is also noted that every time Naruto Uzumaki becomes overwhelmed by Kurama’s (Nine-Tail) power, he gains another “tail” of chakra, which stems from the belief that the more tails a kitsune has, the more powerful it is, with nine being the limit, at which point it becomes a ‘Tenko’, a heavenly/celestial fox, the most powerful form of the kitsune, and then ascend to the heavens.

3 ⇒ Based on its reaction, Naruto Uzumaki almost dying at the hands of Kabuto was the only time Kurama (Nine-Tail) was close to death, or to that matter, suffered any injury it could not simply heal through.

4 ⇒ Yin-Kurama has the notable distinction of being the only tailed beast to have never been sealed inside the Demonic Statue of the Outer Path or a Chibaku Tensei.

5 ⇒ In the manga pilot, Kurama was actually Naruto Uzumaki’s father, who attacked the ninja village and needed nine shinobi to defeat. Hiruzen was the only survivor and had taken pity on Naruto Uzumaki, who had taken human form, and allowed him to live in the village.