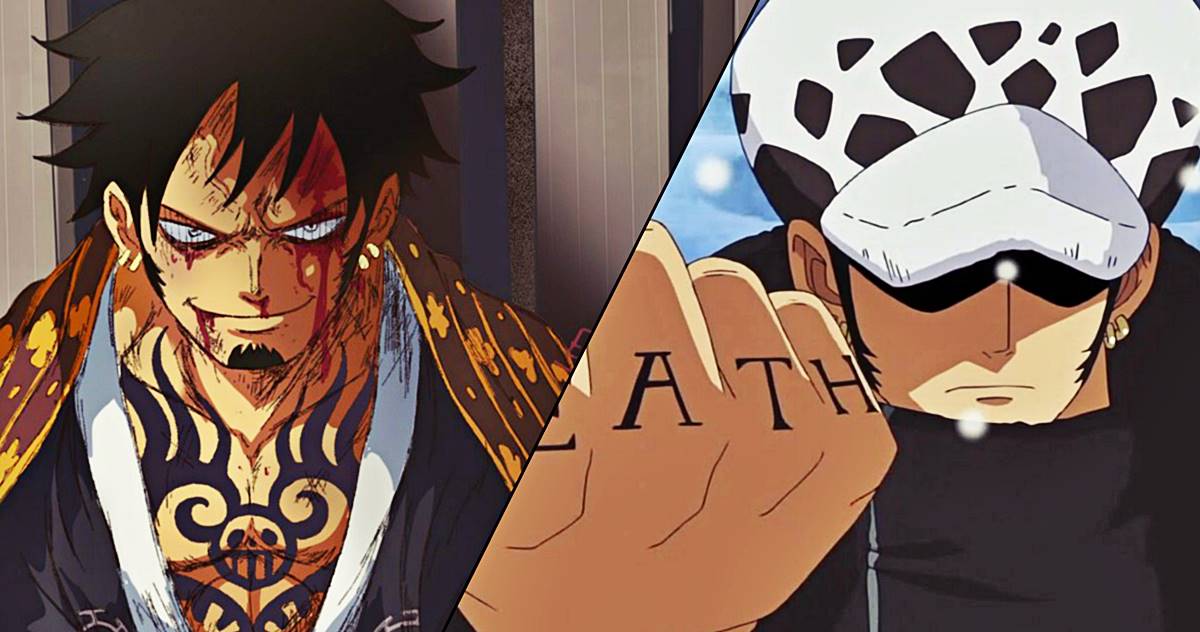 Trafalgar Law is the Captain of the Heart Pirates and one of One Piece’s most ruthless pirates. Law landed at the Sabaody Archipelago with a bounty of 200 million berries as one of the Worst Generation members. Trafalgar Law has substantially progressed over the time-skip and has shown himself among the elites by receiving a 500 million berry bounty.

Even though Law’s backstory was filled out in the Dressrosa arc, fans are still uninformed of many details about the ‘Surgeon of Death.’ Here are ten interesting facts we didn’t know about the Trafalgar D. Water Law.

For his Heart Pirates’ banner, Trafalgar Law chose an unusual Jolly Roger. It’s a smiley sort of Jolly Roger. it is similar to Doflamingo but with a tiny difference in that, it lacks the cancel sign. While the meaning of the Jolly Roger is uncertain, the smile is most likely a tribute to Donquixote Rosinante.He died with a grin on his face 13 years ago on Rubeck Island in the North Blue while protecting Trafalgar Law.

Trafalgar Law devised his strategy to survive in the New World and reclaim the One Piece during the two-years time. Law gained the title of Shichibukai by delivering 100 pirate hearts to the Marines, to begin with. He was soon promoted to Shichibukai, and at the age of 26, he became the series’ youngest Shichibukai.

Of course, it is not surprising that Trafalgar Law has a huge bounty on his head. Because he is a renowned pirate. After the Dressrosa events, Law got a bounty of 500 million berries. We can see on Law’s bounty poster, Bepo’s head. This is also similar to Usopp’s head in the background in Luffy’s bounty poster. In the same stance come both the Bepo and Usopp. And on both the posters only the backside of their heads is visible. Eiichiro Oda the author of One Piece did this to uphold Luffy and Law’s alliance.

4.) Trafalgar was mistaken many times

There are many qualities for Trafalgar Law. But he possesses the quality honor as a pirate. The story has pointed out numerous times that the law refuses to take credit for things he did not do. At Sabaody Archipelago, Trafalgar Law didn’t take the gratitude of Jean Bart. Because he was saved from slavery. But Luffy was the savior. Also at Zou, Law was thanked for taking down Doflamingo by his crewmates. But the Heart Pirates captain informed that Strawhat Luffy beat Donquixote Doflamingo and not Trafalgar Law.

There are only a few people that bear the initial D in their name. And Trafalgar Law is one such few people. It is kept a secret his real name is Trafalgar D. Water Law. Not only he but his parents also kept their names a secret. This shows that they had some information about the D clan. This clan people are also described as the ‘enemy of god’.The Amber Lead Disease caused a massacre at Relevance. So they died in this. So whatever they known is unknown to the world. Everyone knows that Trafalgar Law was told to keep his individuality hidden. Even he is looking for the meaning of the D and it’s sure that he will find it one day.

Despite his reputation as a brutal pirate, Trafalgar Law opposes the practice of killing people for no reason. Law, as a doctor is identical to the Strawhat Pirates Tony Tony Chopper since he holds the Ope Ope no Mi. He’s taken a hypocritic oath to save people’s lives. So he is opposed to unnecessary bloodshed. Law says in his fight with Basil Hawkins at Wano Country that he had preferred to avoid wreaking havoc. Also killing cruelly if at all possible because that’s not how he works.

Trafalgar Law organized the Rocky Port incident at some point during the two-year time jump in One Piece to win the title of Shichibukai. Although little is known about the episode. it is said that Law gathered the hearts of 100 pirates and gave them to the World Government. According to common belief, he used his overpowering Devil Fruit talent to summon a huge group of pirates to a certain spot and steal all of their hearts. Koby probably saved the inhabitants of Rocky Port in the same incident, earning him the title of hero.

The relationship between Law and Doflamingo is convoluted. Despite the fact that Law dislikes Doffy for what he did to Rosinante, the King of Dressrosa has taught him a lot. Law, for example, learnt from Doflamingo that the weak don’t get to pick how they die. Even though Law dislikes him Doflamingo, like the rest of the Donquixote Family, has taught Law some valuable lessons.

So far Trafalgar Law has seen plenty of screen time in One Piece. He appears to be one of Oda’s most composed and calculated pirates. Law, in contrast to Luffy’s laid-back demeanor, meticulously plans and executes his plans. At Sabaody Archipelago, he is rather irresponsible as evidenced by his flipping off of Eustass Kid. Even though Donquixote Doflamingo had him utterly thrashed at Dressrosa, Trafalgar Law did the same to him.

Law is a native of North Blue, where he earned a reputation as a merciless pirate. Trafalgar Law, a survivor of the Flevance accident joined the Donquixote family after pleading with them to take him in. Doflamingo allowed him to join the crew at the juvenile age of 10 despite his nihilistic temperament. According to Law, he only had 3-4 years left before he died, so he destroyed whatever he could before he died. As a result, he received fighting training from several members of the Donquixote family.