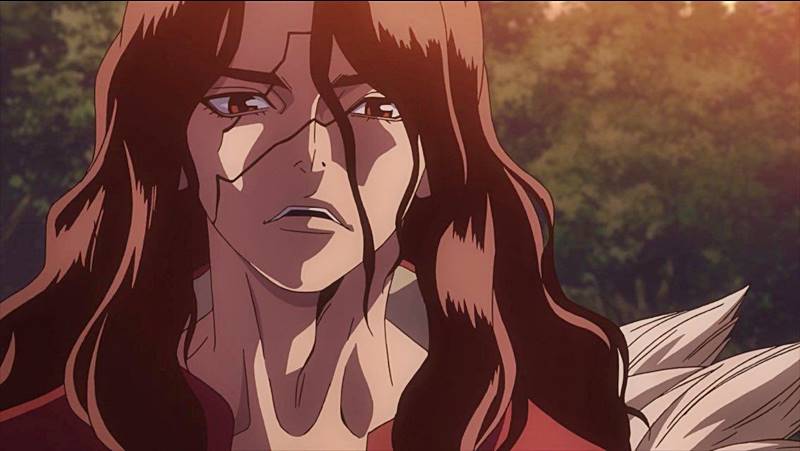 Tsukasa: Hello, friends today This blog is about one of the Male characters from Dr. Stone, Shishio Tsukasa.  He plays the villain in the show. Shishio is made of two words shishi means “lion” and ö means “king” while Tsukasa means Director. He first appeared in Chapter 1 of manga and Episode 1 of the Anime series.

As far as his physical appearance he is very tall and muscular. He has long brown hair with dangerous eyes. His height is monstrous 195 cm. He also has 3 markings, two on the face and one on the body. Since he is Fighter in Series his knuckles are already swollen.  In the starting, he wore a cloak made from lion skin. He doesn’t wear shoes. Tsukasa has only worn them while going in from the rainforest. He also protected senku and Taiju from the lion.

formerly he was the villain for several chapters.  He always believed in creating a world that is free from any modern technology and makes less human population. Tsukasa became a major obstacle in creating the kingdom of science which Senku thought was impossible. He was alone so that he couldn’t fight with Senku so he decided to create an army of his own.

Senku helped him in protecting his sister. And also defeated Hyoga with the hell of him. When senku saved him from a cryogenic state. Tsukasa joined them on a trip to the United States where they will meet and make friends. The objective of the latter was to spread the idea of the Kingdom of Science.

Though he is a villain inside he is a very kind  Thoughtful and polite man. Sometimes he gets angry and violent but he is always aware of his actions. He is pessimistic towards humans. Senku helped him in his revive and in return, Tsukasa also helped them in the hunt for food and shelter. He always thought to purge humanity but Senku didn’t help him and then he leaves the group and wanted to do his plans all along.

Later it is shown that Tsukasa has a sister and he loves her so much. Her name is Mirai. He thanked Senku for his help to find her. He is natural towards his goals. Tsukasa hates those humans who control others.  He always went to help the poor and demolished the power which is hierarchical. He always believed in making society free of any technologies and advancements. Tsukasa can use any method to do this. He wants a world without any guns, nuclear weapons, and chemical weapons.

He is psycho, to be honest. He believes in going combat without any hesitation. Tsukasa goes after people who are older and but doesn’t harm children. Tsukasa believes in fighting when he feels that humanity is at stake. He can do sudden actions which are not expected at that moment. Such seen when he kills senku after they had s moment of friendship. He believes in inequality. He also helped Senku in reaching the US for his Kingdom of Science journey.

To be correct he is the strongest man in the series till now. His name literally means Lion Ruler.

1. Physical powers- He has a powerful physical appearance and which is seen. His capabilities are not fully discover yet. He has gained the title” the strongest man”

2. Strength and speed- He possesses high power which is shown when he is able to kill the leader of a pack of lions. He almost made Taiju lose his consciousness with only one punch. He also cut a tree with only one stroke of his punch. His speed is fast and immense. Senku shot s bow at him he just simply able to catch it with bare hands.

He is also a master swordsman. He has a stone blade which is his favorite weapon. His senses are beyond imagination. He can sense anything. When in a fight with Hyoga he was able to continue though he was wounded badly. Even after shot by American soldiers he didn’t die and came back again. He has gifted intelligence also. He also understands the concept of science with Senku and Chrome. Tsukasa also created a petrification formula and copied it to some extent. He has charisma. He is very popular in the leader. In a battle team of Kingdom of science, he was the leader and everyone followed him

Though he has great physical strength and power. Smartness is also his weapon. He has seen wielding a spear sometimes with a stone blade to hunt for the fish. Later he uses the spear with the sword. After revival, he can also be seen using two swords at a time.

He made his place 10 in the popularity poll..

Tsukasa wants to create a world without any science snd technology and live a primitive life.

He was the first to establish an empire in the series after the petrification event.

His empire was established after years of Ishigami village formation.